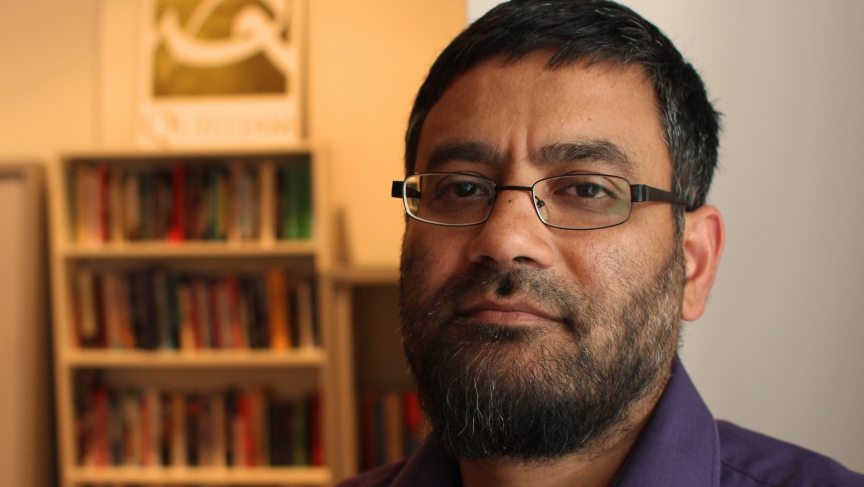 Usama Hasan is senior researcher for the Quilliam Foundation in London.
Credit:

In the video showing reporter James Foley's execution, the masked militant standing next to Foley speaks with what sounds like British accent. That familiar tone shocked Usama Hasan.

Hasan is a senior researcher for the Quilliam Foundation, a group that researches extremism in the UK. But if he was shocked, he wasn't particularly surprised.

For one, the man in the video is just one of hundreds of Westerners who have traveled to the Middle East to fight with ISIS, the militant Islamist groups that controls parts of Syria and Iraq and now calls itelf simply the Islamic State. Last week, the head of Scotland Yard, the London police headquarters, told reporters that about 500 Britons are among them.

Hasan also says there have recently been similar cases where members of ISIS and other extremist groups have posted pictures or videos of killings, many of them beheadings. He mentions the murder of a British soldier on the streets of London last year. A British couple was later convicted for posting YouTube videos that celebrated the killings.

"On social media, they’ve expressed their delight and rejoice at murder and execution of their enemies,” he says.

While the identity of the man killing James Foley has not yet been verified, Hasan doesn't have any doubts about his British accent. “I don’t know anybody in Britain who doubts that it’s a British man,” he says.

So why do young Muslims from Britain go off to fight in Syria and Iraq? One reason, Hasan says, is a "sense of disillusionment." Hasan knows the feeling: In the early 1990s, he traveled to Afghanistan to join Islamist fighers. “We had a feeling that we weren’t accepted and welcomed in the society. Britain was a lot more racist in the 1970s,” he adds.

While British society has changed since then, Hasan says other events have contributed to the same sense of disillusionment. “This current generation grew up in the post-9/11 phase with the war in terror, often being misunderstood or used to justify suspicion against Muslim communities in Britain and in Europe,” he says.

Hasan stopped fighting for the mujahideen years ago. He says he managed to assimilate into British society, eventually going to college, finding a job and starting a family.

Today, he says, he works with young Muslims in his community to combat radicalization. More people with experience on the extreme fringe, he says, are need to make sure new recruits don't follow them.