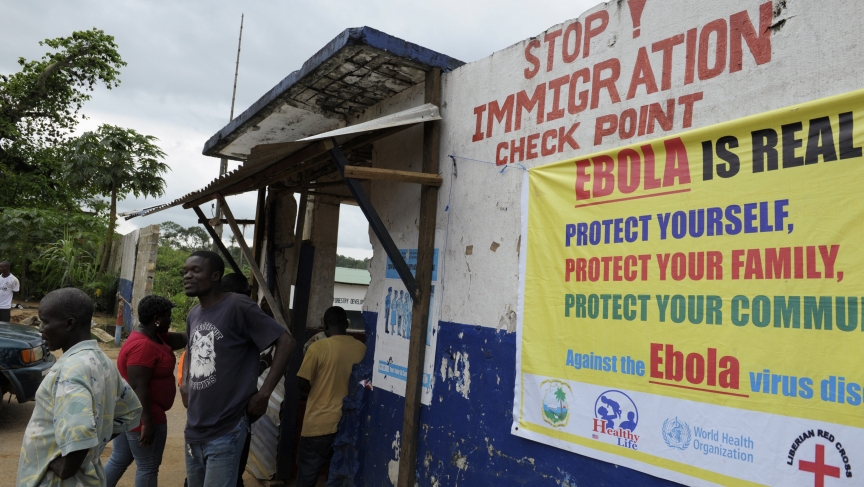 Liberian soldiers check people travelling in Bomi County August 11, 2014. Liberian troops set up Ebola roadblocks and stopped public access to some of the worst-hit towns after the country declared a state of emergency to tackle the worst outbreak of the disease on record.
Credit:

Troops and police have sealed off a large slum in the Liberian capital, Monrovia, out of fear that Ebola is out of control there.

The neighborhood of West Point is where a mob busted open and looted a quarantine station last weekend.

It's not clear how many patients were taken into the community. But fear of Ebola has triggered emergency measures from the Liberian government. Police had to use tear gas Wednesday to beat back crowds trying to get out of West Point.

The Ebola crisis in West Africa has not been helped by the departure of many American and other Western medical staff. Replacements have been slow to arrive.

Sheri Fink has been writing about the crisis from New York, for The New York Times. She's a doctor herself, and has worked as a doctor in disaster areas and warzones.

“Some of the veteran aid officials and responders that I’ve spoken with,” says Fink, “have talked about this being a different kind of fear.”

“When you’re in a military situation, there are threats from bombs and bullets. But this invisible threat in some ways creates a different kind of fear,” she adds. “And that’s frightening to people.”

Fink says this impacts the crisis as “we are seeing not as many of these aid groups really rushing in to deal with the crisis — that’s at least what some aid officials are saying. They’re saying it’s hard to fill positions on rosters.”

Of course there are lot of people bravely working in the areas, Fink adds, “trying to treat patients as well as get a hold of the preventive side, which is really what needs to happen.”

Fink says there also shortages of basic equipment — gloves, masks and protective clothing, especially away from the Ebola treatment centers and quarantine stations. But Fink points out that sick people are turning up at regular clinics and doctors’ offices, where medical personnel do not have the kit to safely respond.

Ask your questions about the impact of Ebola in West Africa by joining our Facebook Q&A, happening Wednesday, August 20.
Post by PRI's The World.