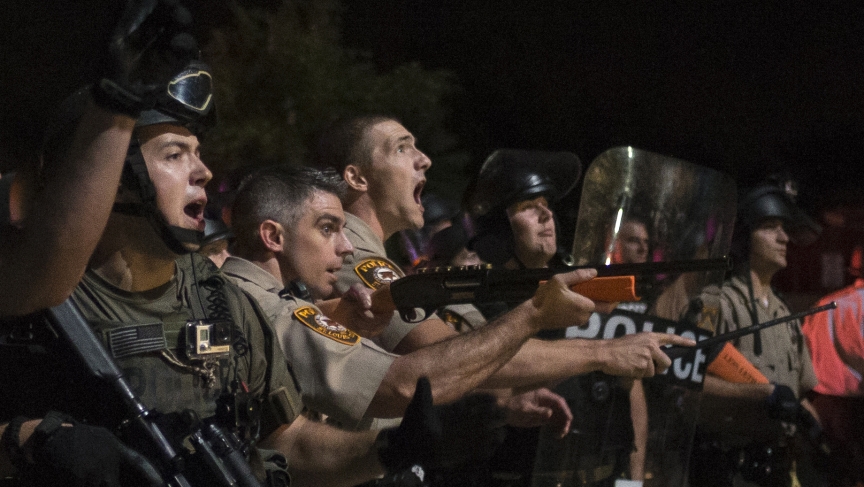 Security forces charge demonstrators after being hit by water bottles during a protest against the shooting of unarmed black teen Michael Brown in Ferguson, Missouri, on August 20, 2014.
Credit:

The situation in Ferguson, Missouri, is still rife with unanswered questions and ambiguities surrounding the death of 18-year-old Michael Brown. One question in particular has fueled much of the discussion: Are police shootings like this an unfortunate accident, or the playing out of a grim script of racial division?

"What happens in many, many communities across the United States is that there is a lack of respect or a sense that black people are presumptively guilty," says Annette Gordon-Reed, a professor at Harvard University. "That leads to a number of horrible situations, from deaths to everyday harassment, which is a problem — it's demoralizing."

Gordon-Reed won a Pulitzer Prize in 2009 for her book, "The Hemingses of Monticello: An American Family," about the hidden history of Thomas Jefferson's slave family. She says that worries about black integration in America stretch all the way back to Jefferson's day. America's third president thought African-Americans “would never forget the wrongs done to them in slavery and the white majority would never overcome its ‘deep rooted prejudices.’”

Gordon-Reed says the situation in Ferguson represents exactly that kind of ingrained racial divide. She argues that the post-slavery experiences that Jefferson predicted are integral problems that need to be a part of America's national discourse.

"There is a greater fear, I believe, of black people," she says. "A number of people have pointed out situations where whites have gotten into altercations with cops — have hit cops, have shot cops, have done all kinds of things — and they don't get killed. It's almost as if there's a sense of a black person, black power, that is menacing."

That menace, she says, leads to bigger consequences: "There's also the realization that killing black people is allowable in ways that it's not allowable to kill whites. So black lives are less than white lives."

Gordon-Reed, who is African-American, has seen this first hand. She says her brother's friend was killed in police custody when she was growing up. "In this instance the officer was put on trial, but he was acquitted of self defense," she says. "It was pretty clear that nothing was going to happen to him."

Those racialized fears of African Americans were an essential premise of slavery, and Gordon-Reed says they've been passed down throughout the decades. "This comes from slavery, it comes from Jim Crow and the aftermath of slavery and reconstruction — the idea that black lives are worth less," she says

And those fears have robbed African Americans of basic rights of citizenship, like moving freely without the fear of harrassment or being able to bring your problems to the authorities. Many people in minority communities are afraid to even call the police, says Gordon-Reed, and she admit she's still sometimes hesitant to call the police herself.

"If [African Americans are] worth less, period, they are certainly not to be accorded the full panel of rights of citizenship," she says. "The question is, how do we live together as equal citizens? And we haven't resolved that."

In the meantime, she thinks that better training and diversifying police forces could be a starting point.

"I have hope that it will change," Gordon-Reed says. "I'm not hopeful that it's going to be quick and it's not something that I think will be in my lifetime. ... Obviously we've come a long way, and a lot has happened that Jefferson could never have envisioned. But it's not going to be easy."

This story first aired as an interview on PRI's The Takeaway, a public radio program that invites you to join the American conversation. Join Takeaway Host John Hockenberry today at 6 p.m. ET for a Twitter chat on Ferguson, race, justice, and America. Follow @TheTakeaway and use the hashtag #BeyondFerguson.