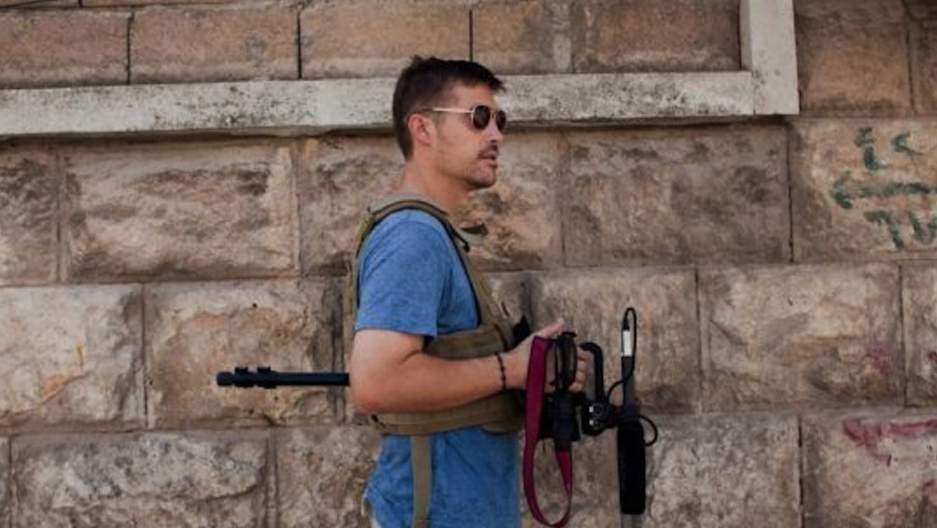 LONDON, UK — Who is the man standing next to James Foley in the video that shows the final moments of his life?

UK security and intelligence agencies have been working feverishly to unravel that question since video emerged of a masked man with a distinctly British accent beheading the 40-year-old American journalist. He was freelancing in Syria for GlobalPost and other publications when he disappeared nearly two years ago.

“We're very concerned by the apparent fact that the murderer in question is British and we are urgently investigating,” Foreign Secretary Philip Hammond told the BBC.

“Agencies on both sides of the Atlantic are first of all looking to authenticate the video to make sure that it is genuine — and sadly it appears to be — and then to see if we can identify the individual in question."

National Security Council spokeswoman Caitlin Hayden announced on Wednesday morning that intelligence officials had "reached the judgment that this video is authentic."

In remarks delivered shortly before 1 p.m. Wednesday, President Barack Obama said the "entire world is appalled by the beheading of journalist James Foley" and said the United States will do whatever is needed to pursue "justice."

Linguistic experts have tied the accent of the man who appeared to have killed Foley to London or southern England. However, experts say he may have picked it up from an English teacher or international school and not necessarily be British born or bred.

Nevertheless, British foreign fighters in Syria supporting the Islamic State, or IS, the group that executed Foley, were eager to claim him as their own.

“Beheaded by a British brother! What an honour!” wrote a foreign fighter from Manchester who tweets under the handle Qaqa Biritani. “What a beautiful message to America!”

An estimated 400 Britons have traveled to Syria to take part in the conflict there. While authorities may learn more about the group or circumstances behind Foley’s death, identifying the masked man who appeared next to him will be a difficult task, experts say.

Although the video has probably been scrubbed of much of the geotagging and metadata that could help investigators, even the smallest clues can prove vital in investigations such as these.

US intelligence officials identified Khalid Sheikh Muhammed as the killer of Wall Street Journal reporter Daniel Pearl partly because of a distinctive Y-shaped vein on his right hand visible in the video of Pearl’s decapitation.

The International Centre for the Study of Radicalisation at King’s College London has done extensive work analyzing the videos, social media posts and other internet droppings of foreign fighters in Syria.

Almost always, there are tiny clues that investigators can seize upon to tease out an identity — eye color, a codename, a few careless tweets.

“In this video there’s none of that,” said Joseph Carter, a research fellow at the ICSR.

Prime Minister David Cameron cut short his holiday on the English coast on Wednesday to return to Westminster for emergency meetings on the IS threat.

Police are also looking for people sharing the video or images from it online. Simply viewing or possessing extremist propaganda is a criminal offense under British law.

The video of Foley’s death appeared carefully calibrated to send a specific message to the US, terror experts said.

“In the video, they don’t claim that he’s a spy, they don’t claim he fought against Islam, they just say: we are sending a message to you,” Carter said. “It’s a very symbolic act, which is what terrorism is really about.”

The apparent killer’s British accent is no accident. It’s a political jab at the West that the Islamic State is recruiting its own, said Raffaello Pantucci, a senior research fellow at the Royal United Services Institute.

And the choice to film the beheading on a sweeping desert landscape sends a definitive signal to its intended US audience in the wake of their involvement in Iraq — that this land belongs to us, says Patrick Skinner, a former CIA officer who is director of special projects at the Soufan Group, a consulting firm in New York.

“That was the first thing I noticed: Wow, they are doing this in the daytime, in the open. They are not afraid,” he said.

It’s impossible to know how many of Foley’s 635 days in captivity were spent in IS’ control, Skinner added.

Militants have been trading, purchasing and abducting Western hostages from other groups. Some hostages, particularly Europeans, are held for ransom. Others, like Foley, are kidnapped for their strategic or symbolic value.

In the end, Foley had the terrible luck to be an American in IS hands just at a moment when the group wanted to send a message to the US.

“This was not about revenue,” Skinner says. “They needed this statement more than they needed any amount of money. It’s tragic, but there is nothing that could have saved him.”