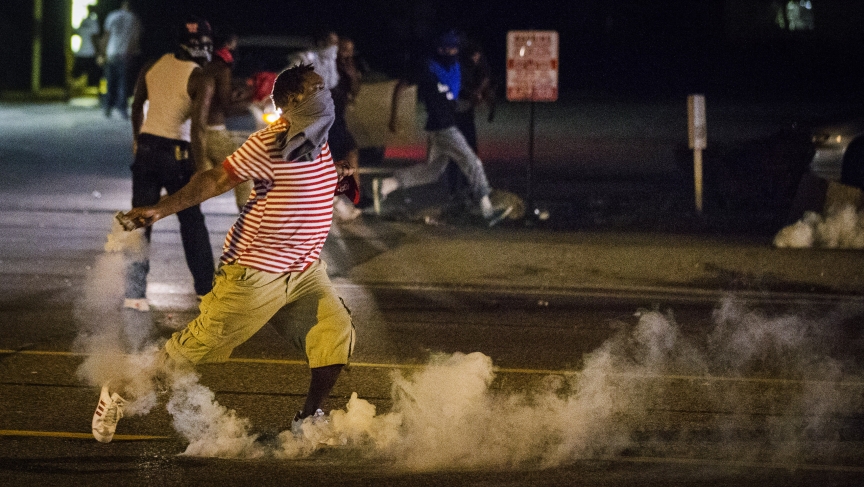 A protester picks up a gas canister to throw back towards the police after tear gas was fired at demonstrators during a protest in Ferguson, Missouri.
Credit:

For me, the Midwest and the Mideast have always been far apart.

St. Louis is the quiet, friendly place where I grew up, just a 20 minute drive from the suburb of Ferguson. Jerusalem is the tense, volatile place where I report.

But now the two are beginning to resemble each other, and the violence has hit close to home. The mother of 18-year-old Michael Brown, who was shot, graduated from my high school a year before I started my freshman year.

Police fired tear gas and flash grenades toward the crowd of demonstrators in Ferguson on Monday. Police said they were responding to demonstrators throwing Molotov cocktails.

It looked an awful lot like protests that erupted in east Jerusalem last month, where young, masked Palestinians hurled stones at Israeli security forces, who responded with tear gas and stun grenades.

The pop of tear gas being fired sounds the same, here and there. In fact, people in the West Bank and St. Louis have been Tweeting photos of spent tear gas canisters manufactured by the same Pennsylvania company.

Palestinian activists and St. Louis protesters have been bonding about all of this on Twitter — an unlikely connection.

“I’ve never been to Missouri, I’d never heard of Ferguson or St. Louis or any of that,” said Linah Alsaafin, a 23-year-old Palestinian activist who has been Tweeting about Ferguson.

Solidarity with #Ferguson. Remember to not touch your face when teargassed or put water on it. Instead use milk or coke!

There’s a picture circulating on Twitter of a woman in Ferguson pouring a McDonalds milk drink over another woman’s face and eyelids.

from the bottom of my heart g, i love every single person from Palestine that sent their regards. keep fighting. it'll get better #Palestine

“It’s crazy when someone around the world reaches their hand out to you to say, it’s gonna be all right,” Perkins said. “It made everyone feel good. Everyone was talking about it.”

Some opposed to the police force in Ferguson have pointed out on Twitter that the former head of the St Louis County police received counterterrorism training in Israel. Others have Tweeted that the two situations are not alike.

Some have accused the Palestinians on Twitter of stealing Ferguson’s limelight, but Linah Alsaafin disagrees.

“Sometimes we get accused of being too focused on our own cause. Being selfish, maybe thinking that our own cause is the only one that matters in the world,” said Alsaafin. “But the fact of the matter is that oppression happens everywhere. There is an underlying connection between all these oppressive struggles.”

Antony Perkins, the high school senior who tweeted out his love to Palestinians, says he’s been going to the protests not only to demand an end to racial profiling, but to take pictures.

“It is very scary. But I feel like someone has to do it. Someone has to be in the middle of things so everyone else can be aware,” Perkins said.

He said he’s interested in a career as a photographer, and what’s been happening in Ferguson makes him interested in traveling the world to document other conflicts.

Maybe one day he’ll be another St Louis journalist in the Middle East.