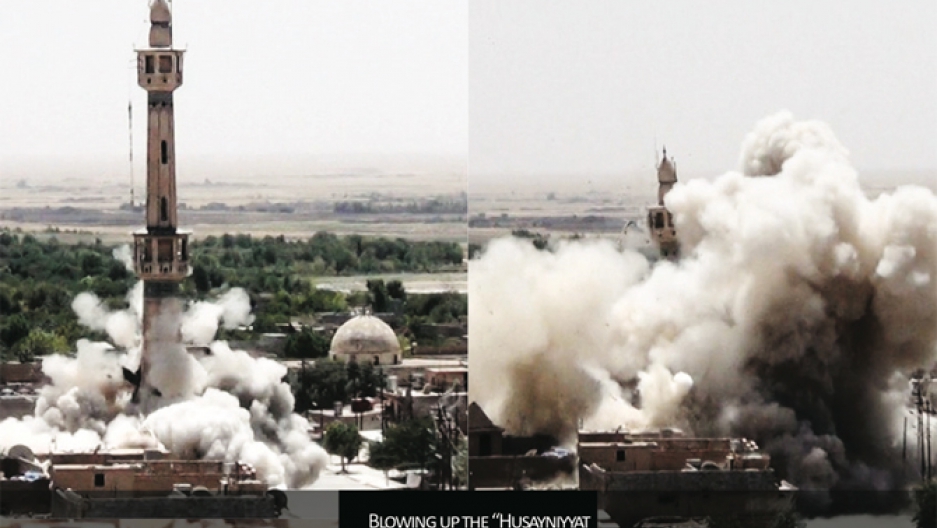 KIRKUK, Iraq — When the Islamic State and a band of local Sunni militants took the city of Mosul in June, local resident Aiala was happy. Being a devout Muslim, she said it angered her when women would walk in the streets dressed “immodestly.” She hoped Islamic rule would bring “morality” to Mosul.

Recently, she changed her mind.

“They are not Muslims. They destroyed the shrine of the prophet,” said Aiala — not her real name — in a telephone interview from Mosul last week. “Islam is about peace, not destruction and killing.”

While they continue to gather numerous recruits from some sectors of society and expand their borders on multiple fronts through Iraq and Syria, the Islamic State (IS) is facing increasing rejection from within.

The razing of sacred shrines and tombs and the displacement of Iraq’s minority groups has turned thousands of Mosul citizens, like Aiala, against the Sunni extremist group that just a few months ago enjoyed a relatively high level of local support from the Sunni majority after ousting an oppressive Shia-led Iraqi government. Even the militant groups who allied with IS against Prime Minister Nouri al-Maliki are re-evaluating their alliance.

In Mosul, the attitude toward IS, also known as ISIL or ISIS, has fluctuated rapidly. At first locals were scared and skeptical. IS quickly set out on a public relations campaign to convince the people they weren’t as bad as their public executions and throat-cutting reputation might suggest.

Christians were assured they were welcome to stay. The Kurds were told, “You are our Sunni brothers.” Impressed by a newfound security in the city, many began to warm toward their new extremist rulers. But the release of a new “city document” on June 11 served as a warning of what was to come.

More from GlobalPost: Iraq's Christians feel the US and the church have abandoned them

Among the 17 points, alcohol and smoking were banned; government security workers were informed they had to sign a “repentance” agreement or be executed; women were to be covered and only leave the house if necessary; and all shrines, statues and graves, the document stated, “must be destroyed.”

At first, these laws were not imposed. But it took little more than a month before IS seemed to tire of the nice-guy — or at least nicer-than-you-expected-him-to-be-guy — facade. They began enforcing their new laws, one by one.

Shias and Christians came under threat. Women were ordered to wear the niqab — Islamic dress covering all but the eyes — and forbidden to leave their homes without a male relative. Residents recently reported arrests and even the breaking of a young man’s fingers for smoking in the street. Ex-army and police force members who signed “repentance” forms and were issued documents of “forgiveness” began disappearing.

Little by little, tensions rose. Murmurs began to spread against these militants and many feared their future intentions.

Then, IS began blowing things up.

“Due to all the destruction operations of Imams’ and Prophets’ shrines in Mosul, many people started talking about the necessity of taking a stand against ISIS to stop them,” said a Mosul journalist and historian, who has been documenting the changes in Mosul since the IS takeover under the pseudonym "the Mosul Eye."

Some defected from IS immediately following the destruction of the temple of prophet Jonah, he said, and at least six assassinations were carried out against IS members. Local Sunni militant groups began calling for a break with IS, the Mosul Eye said.

But threats and intimidation by IS and have left locals fearful. Arbitrary arrests continue to increase daily.

“Many have told me that they need foreign support from forces who are capable of defeating ISIS in order for them to initiate an anti-IS movement,” said the Mosul Eye.

Kirkuk Sunni tribal leader Abu Abdullah said the other groups were becoming increasingly angry and frustrated by IS actions. In particular, the destruction of sacred Sunni sites had caused a rift in this alliance of convenience. JRTN, a Sunni nationalist movement made up largely of ex-Saddam officials, have distanced themselves somewhat from IS. Sporadic skirmishes between the two groups have been reported in Hawija and Diyala, and IS has arrested — and according to some reports, executed — at least 12 members of the JRTN in recent weeks.

But Abu Abdullah said the consensus among the Sunni leaders is to wait until after Baghdad falls before tackling this threat from within their ranks.

In Mosul, some residents are refusing to stand by as their city's heritage is wiped out. Some have begun mobilizing to protect the few sacred sites that remain.

“Today, I saw many militiamen, who don’t belong to ISIS, surrounding Al-Haddbaa Minaret and The Great Al-Nouri mosque, and they shut off the road which goes to it,” the Mosul Eye wrote on his regular Facebook blog.

Last week, in another blog post, he said residents surrounded the Mosque of the prophet Zarzis when IS forces attempted to enter with explosives. The area contains buildings dating back five centuries, he said. IS agreed to close the mosque rather than destroy it, but that night they returned with bulldozers and destroyed the site.

Mosul holds historical importance for dozens of religious sects and cultures across the globe. On this land, the city of Nineveh — to which Jonah came to prophesy before famously being swallowed by a whale — once stood.

Mosul was the capital of the Assyrian Empire. Over the centuries, the city has been controlled by Persians, Arabs, and Ottomans, leaving the city rich multi-cultural heritage.

The IS “city document” addressed the issue of shrines, statues, and graves in its 13th stipulation, citing the example of Mohammed, who destroyed the shrines of Mecca, forbidding his followers to “take graves as mosques.”

Packing explosives into these much-loved icons of the city, IS may have earned much anger and condemnation. But the group has continued to expand its territory recently, gaining another chunk of previously Kurdish-controlled land along the Syrian border, committing new atrocities against the area's largely Yazidi population.

IS continues to win over recruits from within its territory and beyond. With their accumulation of vast wealth from seized properties, racketeering, and private funding, residents of Syria and Iraq say that IS salaries are higher than those of government soldiers. And with the job comes weapons, vehicles and power. Even Aiala said many of her now unemployed relatives and neighbors had joined as a means to support and protect their families. She said in particular, teenagers from poorer neighborhoods were signing up en masse, seeing their chance to climb the social ladder.

Sunni militant Sadoon Obeidi said in an interview last month that of those he had encountered among the IS ranks, the majority were young and somewhat uneducated, particularly in Islamic beliefs — something he felt is unfitting of an "Islamic State."

This time last year, as IS burst into the Syrian conflict, the group rapidly took vast amounts of territory with little resistance from local people or fellow rebel Sunni groups. But within six months even Al Qaeda-linked Syrian rebels mobilized against them, pushing them back east of Aleppo.

But Sunni militants in Iraq lack the international funding of secular Syrian rebels. Keen to defeat the government first, they are not prepared to fight on two fronts.

“Yes, we are afraid of a repeat of Syria here,” said Sadoon Obeidi, a Sunni militant now fighting alongside IS forces. “But for tactical reasons we are holding this alliance with IS.”

First in Syria, and now in Iraq, IS seems intent on a show of power and ruthlessness rather than compromise. It is a gamble, but one that seems to have paid off, so far.