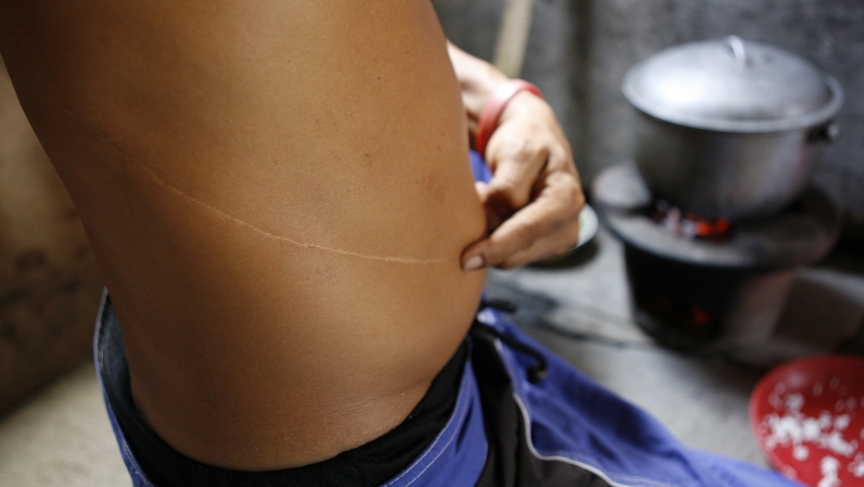 An unidentified Filipino man who sold his kidney for a transplant shows his scar while cooking at his home in a slum of Manila.
Credit:

This year in the United States, 100,000 people are on the list for kidney transplant. And many of them — more than 4,000 every year — will die waiting.

That's because there's a huge imbalance between the global need for kidney transplants and the tiny supply of them, which the World Health Organization says amounts to "maybe a tenth of the worldwide need."

"That adds up to tens of thousands of people every year who are on dialysis, on waiting lists and have no prospect, really, of getting a transplant any time soon," says Kevin Sack, a national correspondent for The New York Times. That shortage prompts many people to buy kidneys illegally on the black market, which Sack has been investigating for the past year.

He focused on a particular case that began in Israel, where a mixture of religious law and cultural practices have led many to reject organ donation. The result is a desperate market of patients who will do anything for a transplantable organ.

Israelis and people from other countries who need a kidney get in touch with brokers, who pass them on them to nephrologists — doctors who specialize in kidney problems. Those doctors are willing to do the transplants and, crucially, have the connections to find transplantable kidneys.

Sack's reporting in this case led him to a Dr. Mora, a well-known nephrologist in Costa Rica. If Israel is a key source of demand for kidneys, Sack says, Costa Rica has become an epicenter of illegal supply. "Costa Rica has developed a really sophisticated medical tourism industry over the last decade," he explains.

That's because of two powerful economic incentives. One is the fact that doctors in the country work at public hospitals and earn fairly low salaries, but they're also allowed to moonlight at private hospitals. "There they're paid by the case. So the more foreign patients they bring into those hospitals, the more they make." The other is general poverty, which means there are ample number of people who are "almost always in some sort of significant economic distress" and can be convinced to give up a kidney.

Mora finds those "donors" using at least two recruiters. One, named Ms. Cordero, "was a police officer and a taxi driver by night, and, yes, she would ocasionally solicit fares in her cab to become donors."

It might seem like a win-win: Vitally-needed organs in exchange for vitally-needed cash. "Certainly the brokers all argue ... that they are saving lives, that they're filling unmet need," Sack says. "That said, they're making huge amounts of money. They're motivated at least equally by greed as by any good intentions."

That's because the going rate for a black-market kidney transplant is anywhere from $100,000 to $200,000 — or even higher. "We actually found a gentleman from Texas who had arranged to pay $330,000 for a transplant," Sack says. But, of course, "the amount that goes to the donor, the quote-unquote donor, is a small fraction of that."

They also may get a small fraction of the medical information they need. "There is oftentimes very little discussion of the medical risk they would face, there's very little discussion of the after-care they need," Sacks says. "It's painful and there is, as with any significant surgery, a risk of death and injury. And typically folks do not know much about that ... They obviously go in with their eyes partially open — but only partially."

Efforts to crack down on the trade aren't going particularly well. Prosecutors in Israel are looking into brokers, Sack says, and he expects indictments in Costa Rica soon. But he cautions that "it's very difficult to make these cases and there have really only been a handful — over the last decade, decade-and-a-half — of significant prosecutions."

And even when they do happen, Sacks says prosecutions can be like an "impossible" game of Whack-a-Mole: "Typically when one country cracks down, the brokers find another one that's willing take them. There's too much money involved for them not to find a place to go."