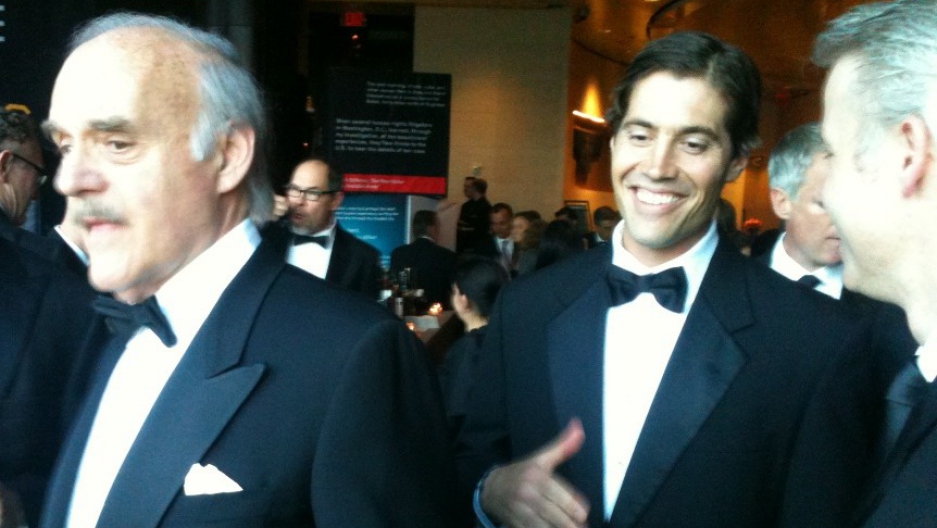 This is a developing story and will be updated as new information becomes available.

BOSTON, Mass. — The extremist Islamic State claims to have executed journalist James Foley, who has been missing since November 2012 when he was kidnapped while reporting in Syria.

Video of Foley depicting his beheading was uploaded to YouTube on Tuesday afternoon and later removed. The FBI on Wednesday morning told the Foley family they believed the video was authentic, but were continuing a longer process of official authentication.

Shortly thereafter, National Security Council spokesperson Caitlin Hayden announced that “the US Intelligence Community" had "reached the judgment that this video is authentic."

In remarks delivered shortly before 1 p.m. Wednesday, President Barack Obama said the world is "appalled by the beheading of journalist James Foley" and said the United States will do whatever is needed to pursue "justice."

The video asserts that the killing of Foley is in retaliation for recent airstrikes by the United States against IS militants in northern Iraq. In it, Foley, kneeling next to an apparent IS militant, makes comments against the US for its actions. The militant also shows on camera journalist Steven Joel Sotloff, who went missing in Syria a year ago, and issues a direct challenge to President Obama that Sotloff's fate will depend on the president's "next move."

As of 7 a.m. local time on Wednesday, Foley's family in New Hampshire had no confirmation from the US government of Jim's death. Late on Tuesday evening the family acknowledged there was a small chance the video may still prove to be fake, but nonetheless released the following statement:

"We have never been prouder of our son and brother Jim. He gave his life trying to expose the world to the suffering of the Syrian people. We implore the kidnappers to spare the lives of the remaining hostages. Like Jim, they are innocents. They have no control over American government policy in Iraq, Syria or anywhere in the world.

"We thank Jim for all the joy he gave us. He was an extraordinary son, brother, journalist and person. Please respect our privacy in the days ahead as we mourn and cherish Jim."

Earlier Tuesday, Philip Balboni, GlobalPost CEO and co-founder, made the following statement: "On behalf of John and Diane Foley, and also GlobalPost, we deeply appreciate all of the messages of sympathy and support that have poured in since the news of Jim’s possible execution first broke. We have been informed that the FBI is in the process of evaluating the video posted by the Islamic State to determine if it is authentic. ... We ask for your prayers for Jim and his family."

In the video purporting to show Foley's beheading, the militant next to him speaks with a British accent. The press office for UK Prime Minister David Cameron issued the following statement early Wednesday: "If true, the brutal murder of James Foley is shocking and depraved. The Prime Minister is returning to Downing Street this morning. He will meet with the Foreign Secretary and senior officials from the Home Office, Foreign Office and the agencies to discuss the situation in Iraq and Syria and the threat posed by ISIL (Islamic State of Iraq and the Levant) terrorists."

More from GlobalPost: Britain is searching for Foley killer

GlobalPost, for whom Foley had reported in Syria, mounted an extensive international investigation from November 2012 to determine who kidnapped Foley and where he was being held. Significant research was undertaken throughout the Middle East, including along the Syria-Turkish border, in Lebanon, in Jordan and in other locations.

“Although GlobalPost’s investigation at one point led us to believe that James was being held by the Syrian government, we later were given strong reason to believe he was being held by Islamic militants in Syria," Balboni said. "We withheld this information at the request of the family and on the advice of authorities cooperating in the effort to protect Jim. GlobalPost, working with a private security company, has amassed an enormous amount of information that has not been made public.”

Foley was on a freelance assignment for GlobalPost when he was abducted in northern Syria on Nov. 22, 2012. He was on his way to the Turkish border when he was stopped by a group of armed men. Foley reported for GlobalPost from Libya and Afghanistan before traveling to Syria in the early days of the now long-running civil war that has taken the lives of more than 170,000.

Foley’s last article for GlobalPost detailed the growing frustration with the war among civilians in Aleppo.

The fact of Foley’s kidnapping was revealed publicly for the first time by his parents, John and Diane Foley of Rochester, New Hampshire, on Jan. 1, 2012, two months after his abduction. The only other American whose identity has been publicly revealed is Austin Tice, a freelance reporter for the McClatchy News Service and the Washington Post, who was kidnapped in August 2012.

While covering the Libyan civil war in 2011, Foley and two other journalists, American Claire Gillis and Spaniard Manu Brabo, endured a 44-day captivity in April and May of that year at the hands of then Libyan strongman Col. Muammar Gaddafi. A fourth journalist, South African Anton Hammerl, was killed when the journalists were captured by Gaddafi fighters near Benghazi in eastern Libya. Foley later returned to Libya to cover Gaddafi’s fall and eventual death. Foley and GlobalPost correspondent Tracey Shelton were at the scene of Gaddafi’s capture in October 2011.