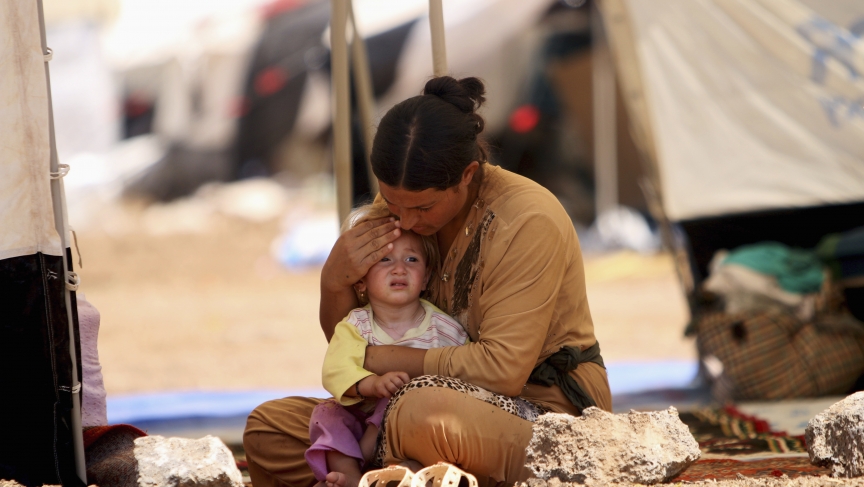 A refugee woman from the minority Yazidi sect, who fled the violence in the Iraqi town of Sinjar, sits with a child inside a tent at a refugee camp in north-eastern Syria. The Yazidis have been brutally persecuted by militants from the Islamic State, some of whom apparently are also fans of Robin Williams.
Credit:

Who would have thought that Islamic militants might also enjoy Robin Williams movies?

The death of the actor and comedian last week provoked an outpouring of sympathy from across the world. That included activists with ISIS, the militant group that has proclaimed an Islamic caliphate in northern Iraq and Syria.

Alex Horton found that out when he went to tweet his his own fond memories of William. Horton, currently a journalist and blogger on national security issues, served as an infantryman in the US Army. During his tour in Iraq in 2006 and 2007, some of the insurgents he fought were much like ISIS.

But Horton still engaged some of the activists when they posted their admiration of Robin Williams on Twitter. He ended up having a long conversation, both on- and off-line, with one Islamist in particular: a 19-year-old guy called Abdullah.

A screenshot of tweets between Alex Horton and ISIS activists, on August 11, 2014. The account @mujahid4life has since been suspended.

Abdullah is a social media activist for ISIS — which now calls itself the Islamic State. Horton says such people are “one of the critical nodes in the Islamic State system. They’re not on the frontlines. They’re manning Twitter feeds and Facebook pages and other social networks to spread propaganda. Whether that’s a decapitated soldier in Kurdistan or a public works project in Syria. They’re all about spreading the message."

Horton said he wasn’t able to get much information about Abdullah beyond what was on his profile, “for very obvious reasons. This guy is an Islamic State supporter, so he’s not too keen on letting the world know who he is and where he is.” (The profile has since been suspended.)

But there were some clear similarities between the two “He’s just a normal guy. He’s from the West, just like me,” says Horton. "He boxed when he was a kid. ... He’s a movie fan just like I am. He talked about Mrs. Doubtfire and Jumanji, and these are films I watched over and over again on VHS tapes when I was a kid growing up in Texas.”

They also chatted about Horton’s deployment to Iraq and what he thought about the current airstrikes in northern Iraq. Abdullah told Horton he also wanted to fight in Iraq himself. "He wants to go, but personal matters — he told me — have prevented him from going to the frontlines," Horton says.

The discussion brought home the odd dichotomy of ISIS supporters. “There’s a very strange view that people who are aligned with the Islamic State — or al-Qaeda or other terrorist groups — that they’re simply monsters, and it’s not the case." Horton says.

On the one hand, he says, "They’re very brutal, they’ve been killing civilians, they’ve been executing thousands of people — unspeakable violence that should face worldwide condemnation."

But then there's the side that was brought home to him on Twitter: "They love Robin Williams, and they laugh every time they see the run-by fruiting scene from Mrs. Doubtfire.” Many of these people share similar backgrounds to us, Horton adds, and share the same love of art. “It’s always been a mistake, historically, to underestimate your enemy — to see them in a light that’s less than humane.”

Of course, many other Islamic militants disagree with Abdullah. They condemn Robin Williams as an unbeliever, a cross-dresser and a critic of jihad. Abdullah acknowledges he was an unbeliever, "but he still had talent."

“They are the enemy and I’ve never strayed from that view," Horton says, "but we can’t view them as this evil, cartoonish force that’s taking over Iraq. They’re supported by some Iraqis for a reason. They’re supported by a lot of Syrians for a reason. This is another step in evaluating why that is and I think it will help, if we ever have to confront them on a larger scale.”

Horton hopes that even a humanizing understanding of ISIS can help defeat them. “When we see them as people more than monsters, it takes away some of their mystique and it takes away some of their power over us," he argues. "They’re taking territory, and they’re convincing people to join their cause because of the fear they produce. So if we can take away that fear, that will be the beginning of the steps that we need to take care of this kind of extremist violence.”

You can read Horton's full thoughts on the conversation at Foreign Policy.