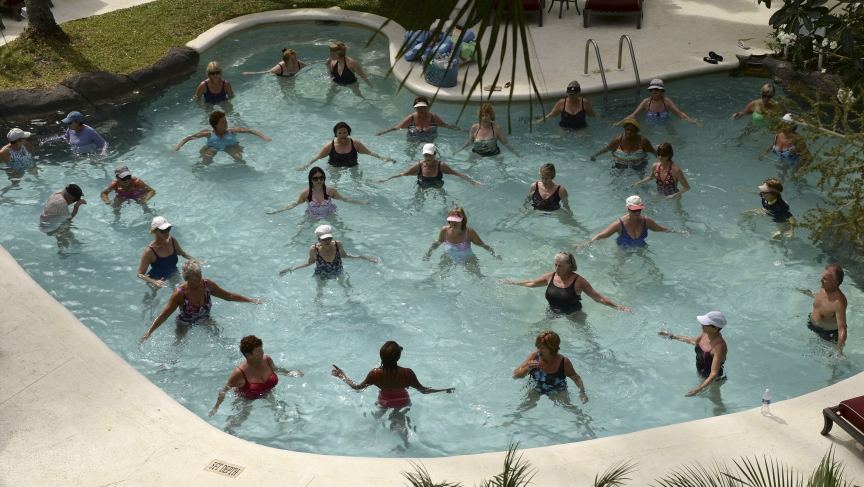 People take part in an aqua aerobics session in a swimming pool at a resort at Holetown, Barbados, March 7, 2014.
Credit:

For many Americans, including President Barack Obama, August is a month for vacation, a time to escape the daily grind and get away.

But for a growing number of workers, taking time off is a luxury they can't afford. According to the Bureau of Labor Statistics, one in four American workers in the private sector — about 26 million people — have no paid time off, compared with less than one-fifth of workers in the 1990s. The US is also the only country among its economic peers that does not mandate paid vacation.

Daniel Levitin, dean of Arts and Humanities of the Minerva Schools at KGI, says that's a real problem, particularly for our overworked brains.

Levitin, the author of “The Organized Mind: Thinking Straight in the Age of Information Overload" says true vacations — real breaks from work, email, and incessant phone calls — are necessary for creative thinking and energy.

"We are in this overcaffenated time where we're really asking to do so much more at work and at home," Levitin says. "We feel like if we even stop for 15 minutes, we're going to fall behind."

For years, neuroscientists have been studying how being overly-busy affects the brain, and they've found that not taking a brain break can reduce creativity and problem-solving skills.

"Working like that with the pedal to the metal all the time is counterproductive," Levitin says. What's more, we don't end up remembering important tasks and become overwhelmed.

"Our long-term memory is exquisitely capacious, but our short-term immediate memory is limited to about 3 or 4 things."

But finding peace of mind is no easy task. Every day, people take in the equivalent of 174 newspapers worth of information.

"YouTube, computer browsing, and television watching — those are great leisure activities," he says. "But they're not the same as engaging what we call the default mode of the brain: The creative, free-flow, free association part of our consciousness."

To find clarity, Levitin suggests staring out the window, taking a walk, or listening to music.

"And one thing that's very effective is naps," Levitin adds. "Even a 10 to 15 minute power nap can be very restorative, effectively hit the neuro-reset button in the brain. And according to some studies it provides a working IQ increase of about 10 points."

But what about for those of us who can't seem to escape the stress, even when we do take a timeout? List-making, Levitin advises, is one of the best ways to quiet the mind.

"If you can write that chatter ... that stream of admonishments or reminders ... then your brain will stop reminding you that something needs to get done. Once you have [a task] on paper, you can start analyzing it and figure out what information will help you push it forward," he adds.