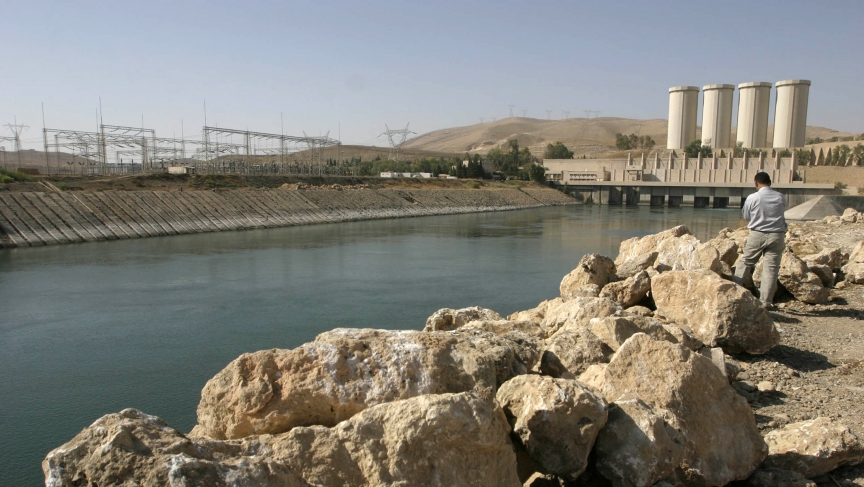 President Barack Obama announced Monday afternoon that Kurdish and Iraqi forces had regained control of the critical Mosul Dam in northern Iraq. But the dam remains under threat — and not just because of ISIS. And make no mistake, it is a critical piece of Iraqi infrastructure.

"It is the largest dam in Iraq," says Azzam Alwash, a civil engineer based in Irbil, the de facto capital of Kurdish Iraq. "The reservoir capacity is about 11 billion cubic meters. That's about 12 billion yards. It's a heck of a lot of water."

He says all the cities along the Tigris River south of Mosul — including Baghdad, the Iraqi capital — depend on this dam. The water irrigates the country's farms and keeps the lights running via hydroelectricity.

If you really want to understand how important this dam is for Iraq as a whole, you have to go back to the 1980s. That's when Turkey started building its own dams on the Tigris and Euphrates Rivers, leaving less water for its Iraqi neighbors to the south.

"So we have a lot less water coming into Iraq from the Tigris," Alwash explains. "And, more importantly, the quality of water is deteriorating." The Mosul Dam was built to fix the poor water quality and make sure Iraq was getting enough water altogether.

But it was an imperfect solution: The dam rests on a layer of gypsum, a soft mineral that dissolves as water percolates through it. As soon as Iraq started filling the dam, its foundation began to cave. "A United States Army Corps of Engineers report designated Mosul Dam as the most dangerous dam in the world," Alwash says.

So, since 1982, workers at the dam have been constantly grouting the holes and cracks with cement. And that's why experts like Azzam Alwash are worried about the recent battles for control of the dam.

"If the grouting operations that [have] been going on 24/7 since 1982 is interrupted, you're going to have gaping holes underneath the foundations of this dam, which will cause settlement," Alwash explains. "Settlement will cause cracks and the cracks will become a breach of the dam, releasing the reservoir water in a tsunami-like wave."

Alwash says the water could flood the city of Mosul within three hours and reach Baghdad in three or four days. That's why he calls the dam a ticking time bomb. Not only could militants decide to blow it up, but it could breach in as little as three months without proper maintenance.

And there's still that other age-old concern as well: Water scarcity. Alwash says if ISIS militants were to retain control of the Mosul Dam, they could also "run the tap dry" by using too much water.

"We don't want to lose too much water," he says. "Because if we operate at capacity the way ISIS has operated Tabaqa Dam in Syria, we could run out of water. We could be looking at a very severe drought next year."

So no matter what the threat, he says, it's vital to make sure that the Mosul Dam is once again under the control of the Iraqi government.