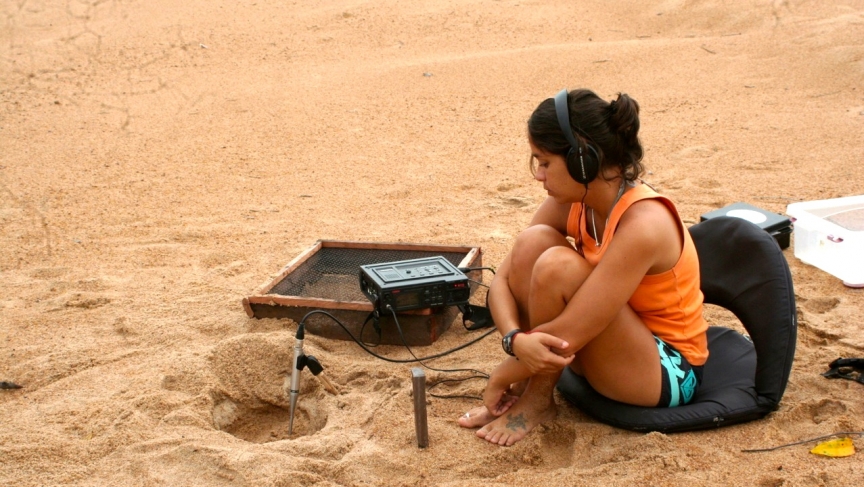 Camila Ferrara of the Wildlife Conservation Society records the sounds from South American river turtles on the beach before they even hatch from their eggs.
Credit:

Researcher Camila Ferrara admits she felt a little stupid while sitting on the beach hour after hour with a microphone pointed at some turtle eggs buried in the sand.

Ferrara was trying to capture the sound of turtle embryos talking to each other — before the animals even hatched from their eggs.

When the sound of turtle chatter finally came through her headphones for the first time, Ferrara says. “It was a big surprise to me ... when I could start to hear the sound. Wow!”

For a long time, scientists assumed that turtles were both incapable of vocalization and completely deaf. But Ferrara, an aquatic ecologist with the Wildlife Conservation Society, is helping to put that misunderstanding to rest along with her colleagues based in Brazil. 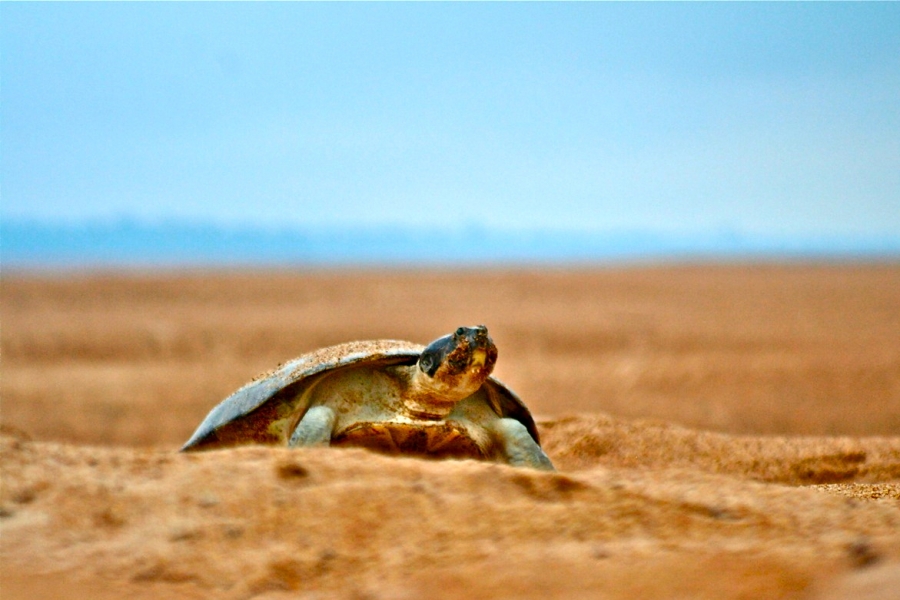 Giant South American river turtles are more talkative than some other species.
Credit:

“In the '50s, there was a general book on reptiles and amphibians, and the author just made a blanket statement saying that 'turtles are deaf and dumb,'” says Richard Vogt, a turtle expert with the National Institute for Amazon Research in Manaus, Brazil. Along with Ferrara, he wrote the study revealing their findings on turtle vocalizations.

The "deaf and dumb" misunderstanding endured, but Vogt says scientists now know it to be untrue. It took a while for them to notice, he explains, because turtles are not all that chatty. If you listen to them for a while, they might only offer up a single short vocal phrase every few hours.

Like whales and dolphins, turtles also speak in very low frequencies. “Somebody that's snorkeling underwater looking at turtles won't hear them because [a diver] makes more noise with their flippers and air bubbles than the volume of [any] turtle sounds,” he says.

Vogt also says the sounds are very short in duration, making them even harder to hear. “There are some [turtle] sounds that are a few seconds, but most of them are in the tenths or hundredths of a second,” Vogt adds.

The current consensus is that turtles are far more social and reliant on vocalization than once believed. Vogt says they even begin to communicate vocally even before they hatch, probably as a way to determine when they will hatch from their eggs en masse. The same goes for plenty of other turtle behaviors: Migration, gathering to bask in the sun and nesting, all of which turtles also do in large groups.

Some species of turtles talk more than others, Vogt says. But he believes that all turtle species use their voices to communicate with each other to some extent. “We're showing that turtles are very social animals,” Vogt says. “The behavior of turtles is much complex than people thought before.”