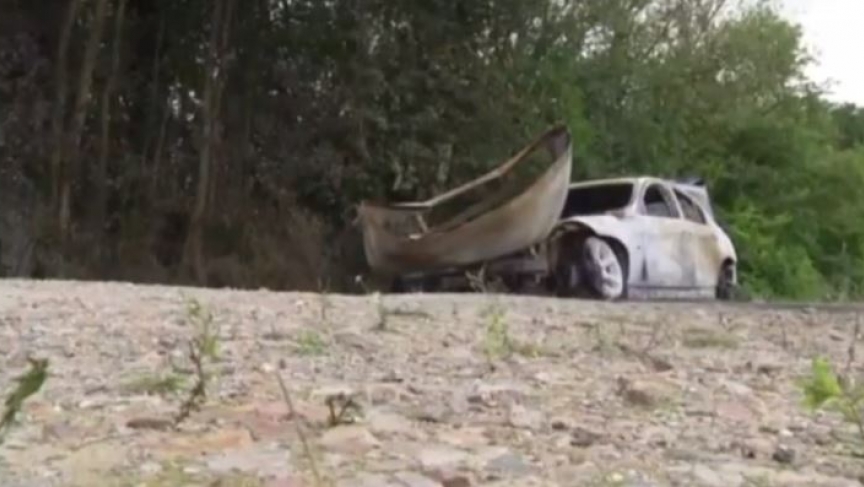 A burned out vehicle was all that was left behind in the attack on Saudi prince's motorcade in Paris.
Credit:

It's like a scene from an action movie: On the way to an airport outside of Paris, a Saudi prince's motorcade, loaded with cash and sensitive documents, is robbed in what French police call a commando-style operation.

The thieves leave the victims behind and flee the scene with more than $300,000 — and a cache of secret documents.

But this was no movie. There it was in the real-world pages of The Telegraph on Monday, described by the paper's correspondent in France, Henry Samuel: "Eight gunmen in two vehicles forced the Saudi embassy's motorcade to pull over to the side of the road in northern Paris while it was headed to the Bourget airport at around 9 p.m. local time. Brandishing assault rifles, the robbers then made off with one car in the Saudi convoy and its passengers, who were later forced out of the vehicle."

“The operation lasted for a few seconds," said Rocco Contento, a representative of the police union, SGP. "It was very quick. No shots fired, no one injured, which indicates it was a very organized and especially informed commando unit who had information and accomplices."

Not a single bullet was fired in the heist, but Samuel says an incident involving heavily armed men wielding Kalashnikov assault rifles is unnerving to Parisians. The heist took place in a northeast suburb of Paris so "in a way it's scary, but it's so targeted that it's not as if they're spraying bullets around. They really knew exactly what they were doing."

But that level of professionalism may be worrying in itself. In recent years, there have been similar incidents involving criminals hitting rich, high-profile French visitors. Samuel says "increasingly it seems like police are powerless to prevent these surgical strikes on very rich individuals like this." He adds "it's kind of embarrassing to the security forces in Paris who obviously want to welcome rich individuals."

As for the documents, not much is known about them so far except that they came from the Saudi embassy in Paris, which hasn't commented on the contents. Samuel also says no one know what exactly the robbers were targeting.

But that point could be a key to the investigation says Nicolas Comte, the SGP secretary-general, who described the ongoing investigation. "We have to establish whether it was the money or documents that were targeted. We also have to hope that the Saudi authorities will cooperate with the investigation," he says. "If they were seeking sensitive information, the nature of the robbery changes. We're no longer faced with organised bandits but something more complicated."