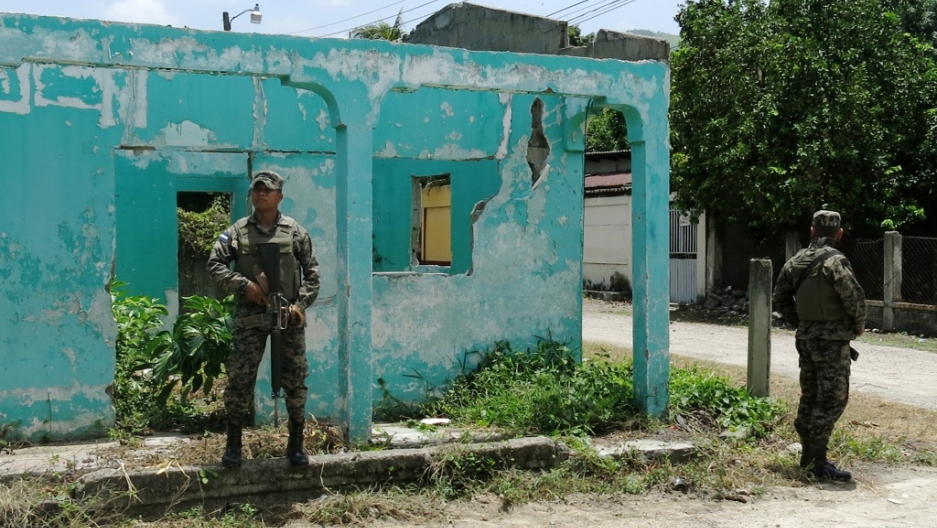 SAN PEDRO SULA, Honduras — The discarded possessions sprinkled around the abandoned houses give clues to the residents’ old lives in the Palmira neighborhood — before they fled in fear of gun-toting gangsters.

A decaying poster of the Real Madrid soccer team decorates the cracked wall of a teenager’s bedroom. The remains of a hot sauce bottle lie on the floor of a smashed-up kitchen. A pair of women’s slip-on shoes sits neatly by a front door that’s been kicked off its hinges.

But block after block, there are no people to be seen.

The hundreds of missing residents of Palmira, which lies on a front line between the warring Barrio 18 and Mara Salvatrucha gangs, have all left on orders from the criminals, says Capt. Cesar Jhonson, a spokesman for the Honduran National Police. Those who refused were brutally killed.

“There was an old lady living in this house here with her two teenage grandchildren until two months ago,” Jhonson says, pointing to a bungalow on the corner. “She wouldn’t go, so they shot her dead. Nobody knows where the children have gone.”

Such forced displacement is characteristic of political, religious and ethnic wars. But in Central America’s northern triangle countries of Honduras, Guatemala and El Salvador, it is becoming increasingly common in the bloody crime wars now plaguing the region.

In Honduras, criminal violence has made more than 17,000 people flee their homes in recent years, according to the Internal Displacement Monitoring Center, a Switzerland-based group that documents refugees around the globe.

Thousands more have fled from criminals in neighboring El Salvador and Guatemala, where the Barrio 18 and Mara Salvatrucha also fight over every square inch of towns and cities.

The problems caused by this displacement have finally gotten Washington’s attention with a surge in Central American children arriving at the United States border.

US authorities have detained almost 63,000 unaccompanied child migrants so far this fiscal year, double that of the whole of fiscal year 2013. The highest number is from Honduras, followed by Guatemala and El Salvador; the number from these three countries has increased more than tenfold since 2009.

As the children have been bused to 150 shelters around the US, demonstrators have come out calling to treat the migrants as asylum-seekers, while other protesters have marched demanding more security on the Rio Grande.

Several factors, including economic hardship and family separation, also drive the migrant rush. But a study by the United Nations refugee agency found that 58 percent of child migrants interviewed were forcibly displaced.

The Palmira neighborhood is in one of the most violent parts of San Pedro Sula, the most violent city in Honduras, which is itself the most murderous country in the world outside a declared warzone, according to UN data. The nation of 8 million suffered from 90.4 homicides per 100,000 people in 2012 — compared with 4.8 per 100,000 in the United States, and with the world average of 6.2 per 100,000.

Much of the violence is driven by the gangs known collectively as “maras.” They began as street gangs of Central American migrants in Los Angeles in the 1980s. But as members were deported to their homelands, they recruited new troops and grew older and more heavily armed, allying with Mexican and Colombian drug cartels.

The gangsters now carry automatic rifles and bulletproof vests and have used grenades and plastic explosives in attacks.

Police estimate there are 70,000 gang members in Honduras and the same number in El Salvador. In a San Pedro Sula police station, officers show a map of the city with the gang territories highlighted, the Salvatrucha zone colored blue and the Barrio 18 area in yellow.

Inside their territories, the gangsters charge businesses large and small with a so-called “impuesto de guerra,” or war tax.

As Palmira lies on the front line, gangsters have cleared it out to make it easier to spot any enemies trying to attack them, Capt. Jhonson says.

“They have created a buffer zone between them, a no man’s land,” he says, as he walks through the deserted area accompanied by police and soldiers standing guard and eying carefully for local gunmen.

Authorities have taken no census on how many families fled Palmira. One resident who lives on the edge of the area estimated 600 families had gone, but a police officer said it was more likely closer to 100. Those who live nearby say the displacement started at least six months ago, with many families fleeing since the spring.

45-year-old Miriam Hernandez fled two months ago with her 4-year-old grandson after she was ordered to leave by men with pistols and rifles.

“I am just glad I am alive, even if I am homeless,” says Hernandez, who is staying temporarily in a charity shelter, sleeping on a section of floor demarcated by a hanging sheet.

Hernandez says she would like to return to her home but fears that the police cannot offer her sufficient protection from the gangs.

One problem is a lack of resources for security forces in Honduras, one of the poorest countries in the Americas. In the Chamelecon district, home to Palmira, police say they only have four patrol cars in an area of about 170,000 people.

Honduran President Juan Orlando Hernandez has asked the US for more money to bolster security forces. Last week, he also visited the US military southern command headquarters in Miami to discuss how it could help train and equip Honduran forces to deal with their gang problem.

However, with a US Congress divided over various budgetary issues, it could be hard for President Barack Obama to reap enough funds to really make Central American countries turn around the security situation.

Vice President Joe Biden also raised doubts about a scheme akin to the US-funded Plan Colombia that could draw the United States deeper into another Latin American crime war.

"Central American governments aren't even close to being prepared to make some of the kind of decisions that the Colombians made, because they're hard," he said.

In another part of the Chamelecon slum, retired plumber Manuel Salvador, 67, says the problem also stems from a systematic abandonment of poor areas over decades that's allowed the gangs to recruit unemployed youth into their ranks.

“I don’t like the gangs but for many kids here they are the only people offering any kind of job,” says Salvador, whose house is in area with “MS” — the tag for Mara Salvatrucha — marked on walls.

Salvador adds that slum violence has also been stirred up by the political strife of recent years.

In a 2009 coup, soldiers flew Honduras’ then-President Manuel Zelaya out of the country. At least 20 people were killed in ensuing protests, according to a 2011 report by the Honduras Truth and Reconciliation Commission.

The overall murder rate shot up in the three years following the coup.

“The gangs are following the government’s example,” Salvador says. “If a government kills, then they will kill as well.”