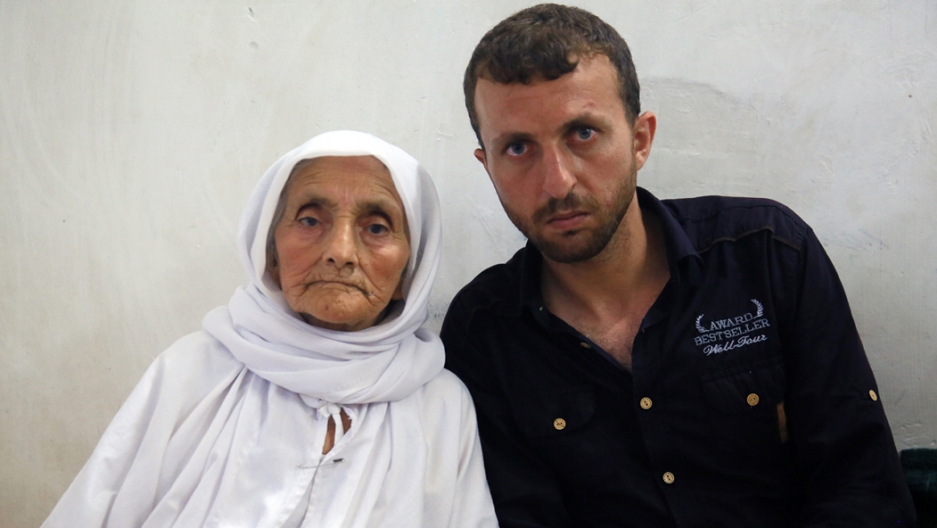 Editor’s note: Last week, we reported on the story of Assad Haig, who lost 63 relatives to the Islamic State in Iraq. The militants left his grandmother behind in the town of Sinjar. She has now been reunited with Haig. This is her story.

Islamic State (IS) militants captured 63 of his relatives, members of the persecuted Yazidi community, when the extremist fighters overran the northern Iraqi town of Sinjar.

One of the militants notified Haig, who works in the Kurdish capital of Erbil, about the harrowing kidnapping spree by phone.

Only two of Haig’s family members managed to evade capture — his father, who fled to Mount Sinjar, and his 84-year-old grandmother, who was left behind by the militants in the family home with the grim warning that she would be executed if she didn’t convert to Islam.

Since then, Haig has been on a life-threatening mission to find his family. Last week, he located his grandmother who had crawled for two days to safety.

The grandmother gave only her first name, Aissan, for this report.

When the militants began loading her family onto trucks, Aissan said she begged to go with them.

She said she tried to climb on to the back of the truck with hands and feet crippled by arthritis but was pushed off.

The next day, she said, the militants returned to her home and tried to force her to convert to Islam. When she refused, she said they gave her one night to change her mind — she would have to wear a burqa and recite words signifying conversion to Islam the next day or face death.

She called Haig and told him she would rather die.

The Yazidis' religion predates Islam and Christianity. The Islamic State's hunt for Yazidis is just the latest in centuries of persecution of the group, whom the extremists have wrongly branded as devil worshippers.

Haig drove from Erbil to Sinjar to try to rescue her, only to be turned away by Kurdish forces at the final checkpoint.

That’s when Aissan decided to flee for safety to Mount Sinjar.

Crawling on her hands and knees for almost two days, she made it to the foot of the mountain, where other fleeing families assisted her into the infamous Sinjar Mountain range. Finally, she was rescued by Syrian Kurdish forces and taken to Syria, where she called her relieved grandson, Haig.

When the Kurdish forces asked her if she had any family left to take care of her, she proudly said, "Yes, I have my grandson and he's coming to get me."

Haig made the perilous overland journey from Iraq into northern Syria to be reunited with his grandmother.

It's a bittersweet reunion as the fate of their other family members remains unknown. For Haig, Aissan, and others fleeing the wrath of the Islamic State in Iraq, the ordeal is far from over.