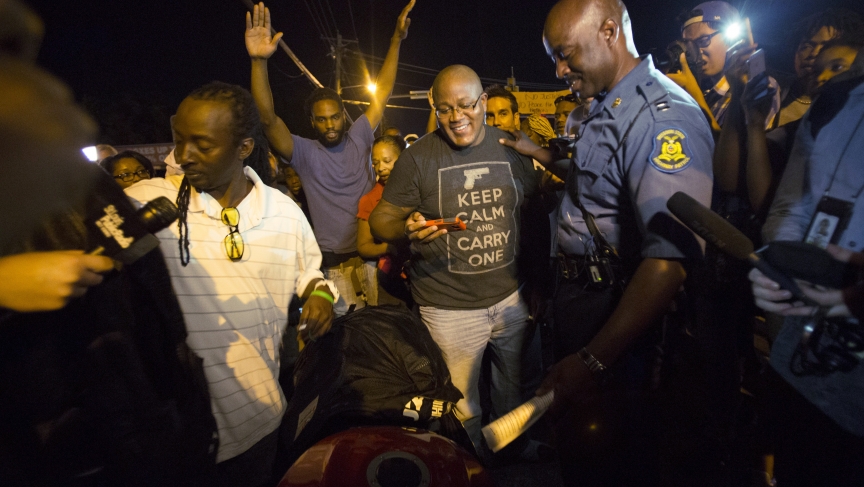 On Wednesday, images of protests in Ferguson, Mo., showed police officers dressed like soldiers, facing off against citizens while wearing camouflage, Kevlar vests and helmets. Tear gas and rubber bullets have been fired. On Thursday, they gave way to photos of hatless, blue-shirted highway patrolmen mixing freely with protesters.

That change helped de-escalate the standoff in the Missouri town where Michael Brown, an unarmed young black man, was shot and killed by a police officer last Saturday. Radley Balko, a reporter and blogger for the Washington Post, says that's not surprising.

"You get confrontation when you go in expecting it,” Balko says. That's particularly true in the case of Ferguson, where the demonstrations are against the police department. Heavily-armed police become a “robotic manifestation of everything they’re protesting against,” he says. “When you discourage both sides from seeing one another as human beings, you set the stage for violence.”

In contrast, Balko says, communities that concentrate on the kind of policing seen on Thursday night — with little riot gear and lots of interaction between police and citizens — typically see positive results. He points to the recent example of Salt Lake City's police chief, Chris Burbank, who peacefully dispersed Occupy protests in 2011 by talking extensively with demonstrators and even giving people who wanted to be arrested the option to coordinate with police.

“I think it should be applied everywhere," Burbank told Balko for a Huffington Post article last year. "That’s exactly how we as a nation should approach these events. We should approach it asking, ‘How can we best facilitate these people’s free speech?’"

But those heavily-armed police departments are becoming normal in many communities. The trend toward militarization in local law enforcement in the United States has been developing over the last 30 to 35 years, Balko says. He recently wrote a book on the subject titled “Rise of the Warrior Cop: The Militarization of America’s Police Forces.”

Balko says it's not just a matter of military gear, which police departments can get from the departments of Defense and Homeland Security. The drug war and the war on terror have changed "the mindset in how police officers view themselves,” Balko says. The St. Louis County police department confirmed to Balko that every warrant is now served by a SWAT team rather than normal officers.

The methods used in Ferguson also grew out of the response to demonstrations at the 1999 World Trade Organization meetings in Seattle. The WTO protests, which started out peacefully, turned violent when the police decided to fire tear gas on demonstrators who were trespassing. “The police chief at the time, Norm Stamper, says today that it was the biggest mistake of his career,” Balko explains. After those protests, “Darth Vader gear” became the norm.

Of course, there’s also the issue of race. Ferguson's population is 67 percent black, while the police department is anything but — 52 out of 55 police officers in the department are white. And according to census data compiled by the Washington Post, it's far from the only community with such a lopsided ratio.

All of these factors add up to policing methods that can stifle protesters' rights, Balko says: “Protest is people basically expressing their right to free speech and free assembly, and when the default response is ‘we are expecting violence, we are expecting confrontation,’ that has a chilling effect on free speech."