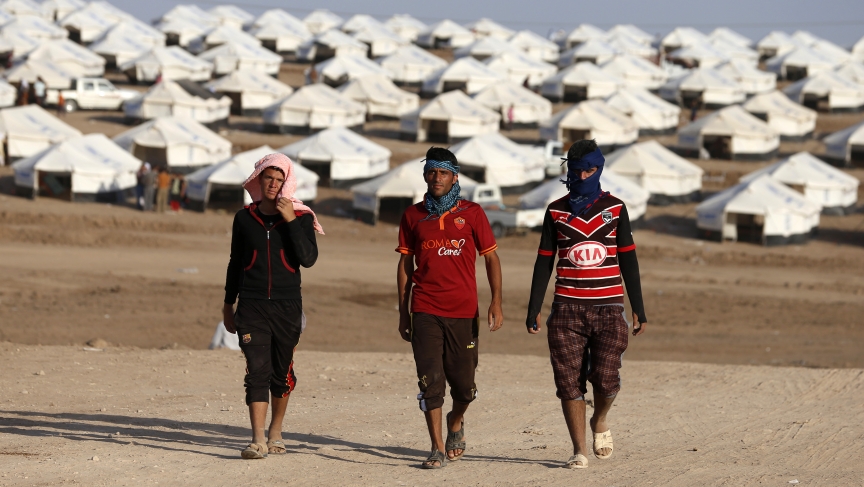 Displaced people from the minority Yazidi sect, who fled the violence in the Iraqi town of Sinjar, walk in the Bajed Kadal refugee camp southwest of Dohuk province on August 15, 2014.
Credit:

Before the ISIS invasion of northern Iraq, nearly half a million followers of the Yazidi faith lived in Iraq. Now, tens of thousands of them are on the run from ISIS fighters, some still trapped on Mount Sinjar, where they took refuge from the militants' advance.

But there's also a large community of Yazidis in an unlikely place: Lincoln, Nebraska. It's the largest American outpost in the Yazidi diaspora, and it's where Gulie Khalaf has been following the news of her people back in Iraq. She says her family is consumed by the coverage.

“They have put their life on the back burner,” Khalaf says. “They have been robbed of their livelihood.”

Several members of her family have quit their jobs over the news. Others go to work but break down crying whenever the subject comes up. Khalaf says most attend meetings and rallies and try to communicate with relatives back home, hoping to find out that things are getting better.

For herself, Khalaf tries to set small goals for each day, be it an interview or a phone call with a humanitarian organization. The tasks help her focus and avoid breaking down and crying. There’s a lot of pressure on the community in Lincoln. “We are the Yazidis' voices right now,” she says.

Khalaf's own relatives escaped from Mount Sinjar, making an 18-hour journey into Syria and then back to a Kurdish-controlled area of Iraq. Now she’s worried humanitarian aid won't reach them. Even if it does, it won’t provide much comfort. Khalaf says her relatives are living underneath what amounts to a tarp held up by sticks.

It’s yet another insult to a population that has been a target in northern Iraq for years. Khalaf says when she lived in a refugee camp, people treated her like a second-class citizen. It was particularly difficult as a child, when she was forced to attend Koran class despite not being Muslim. Yazidis follow a religion that is something of a combination of Judaism, Christianity and Zoroastrianism. She says she also got lower grades just for being Yazidi. “Sometime I would wish that I was a different religion,” she says.

She never converted though, and she's honest about not knowing much about her own. It’s something she simply is, she says, and her people are. Right now, her mission is to get the Yazidis out of Iraq — the Middle East is no place for her people.

But leaving comes with a cost. Khalaf says it severs her peoples’ roots, along with their identity. In the end, she says, “It’s just really saddening.”