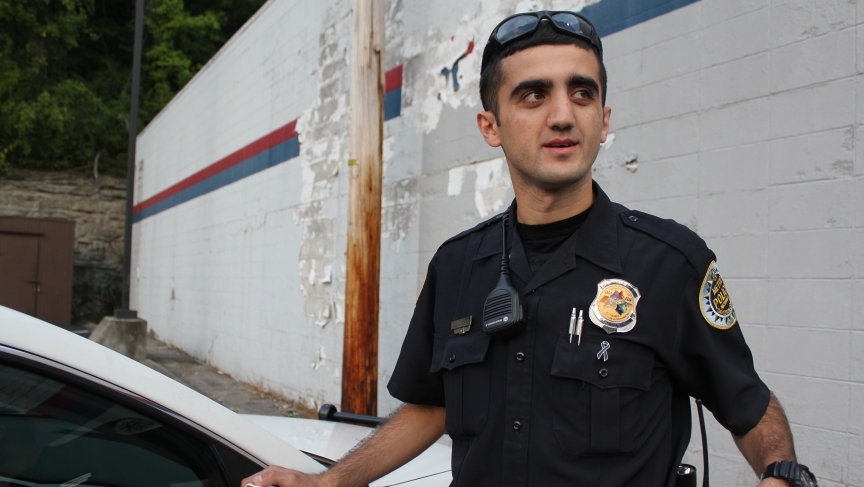 Jiyayi Suleyman, 26, is Nashville’s first Kurdish American police officer. “I took this job to bridge the gap between not only the Kurdish community but the Muslim community with the police department,” Suleyman says. “I wanted to be that one guy that makes a difference.”
Credit:

Jiyayi Suleyman starts his day with morning roll call. Once it's over, he springs to his feet with his fellow officers, checks his equipment and heads to his patrol car. “I eat up every bit of this job,” says Suleyman, a lanky 26-year-old.

He’s still pretty new to the Nashville police force, just two years in. And he's also a pioneer: the first Kurdish American cop in the city.

Few people know that the city is home to America's largest Kurdish community. It built up from the mid-1970s throughout the 1990s as refugees fled war back home, particularly Saddam Hussein’s dictatorship.

Kurds were first attracted to Nashville by its affordability and availabilty of jobs that did not necessarily require English. Several groups in the area, including Catholic Charities, also had a presence in the Kurdish region. Now, there are more than 13,000 Kurds in the city, and it’s easy to see the community’s growing presence by visiting Little Kurdistan on the south side. It is a well-established business and cultural area that caters to traditions from back home.

Officer Suleyman represents another side to Kurdish life here: how the community is integrating and helping to diversify civic life in the city.

I spent the day with him on patrol, and we began by talking about why he joined the force. He says it goes back to 2006. As the Kurdish community grew in Nashville, a group emerged called the Kurdish Pride Gang. It was mostly made up of teenagers whose parents were war refugees.

The group committed a series of well-publicized crimes. But Suleyman noticed that when the gang brought trouble to his neighborhood, nobody called the police.

“I took this job to bridge the gap between not only the Kurdish community but the Muslim community with the police department,” Suleyman says. “I wanted to be that one guy that makes a difference.” 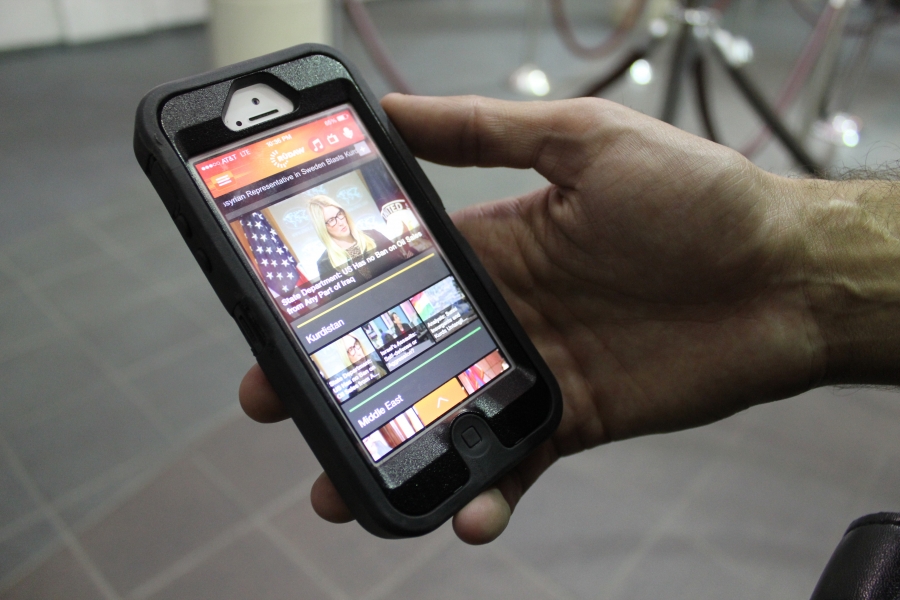 Suleyman’s patrol includes Nashville’s toughest neighborhoods. We pull into a gas station with a small grocery store that's next to a large public housing project. “It’s also a hotspot for drug addicts," he says. "The individuals who come out here are usually intoxicated on something."

We meet Alex Saeed, the store manager. “I was born in the United States but I was raised in Yemen,” he says. “When I come back to this country, I don’t even know the letter ‘A.’ Zero!”

Yemenis and other Middle Easterners run a lot of convenience and liquor shops around here, which can be dangerous work. Saeed keeps a tight watch on his shop. He stands on a crate in one far aisle, drinking tea from a small glass. He and his employees carry guns on their belts.

“The last few weeks, we’ve had casualties and stuff around here,” Saeed says. “People getting shot and stuff like that.”

Saeed likes Officer Suleyman, the only cop he knows who's an immigrant and from the Middle East. “Brother Suleyman, knowing that he’s Kurdish and Muslim also, makes me feel good, " Saeed says. "He knows my culture and he knows my religion and belief, and I’ll assume that he respects it because he’s carrying the same belief.”

In turn, Suleyman says Saeed and other Middle Easterners in this neighborhood are some of his best contacts.

I ask him how he would feel patrolling the city’s Kurdish area, and he admits it would be tricky. “We have a very small community. If something happens, everybody knows about it,” he says. “You then have to face your community saying, ‘Why’d you arrest this young Kurdish guy? Or, why did you do this, why did you do that?’”

I mention that Latino officers often work Latino communities, but Suleyman says it's different for Kurds. “The Kurdish community is so small," he says. “Everybody knows everybody. You can go into our community and say somebody’s name, and everybody will raise their hand and say, ‘Yeah, I know him.’”

Still, he remains the only Kurdish-speaking cop around. He says he gets calls from neighbors, Kurdish families, asking for advice about everything from domestic disputes to parking tickets. While I’m with him though, the only personal call his gets is from his mom.

They speak in Kurdish, and after he hangs up he says, “She wants to know if I’ve eaten yet. She calls me every day to ask that. She worries.” 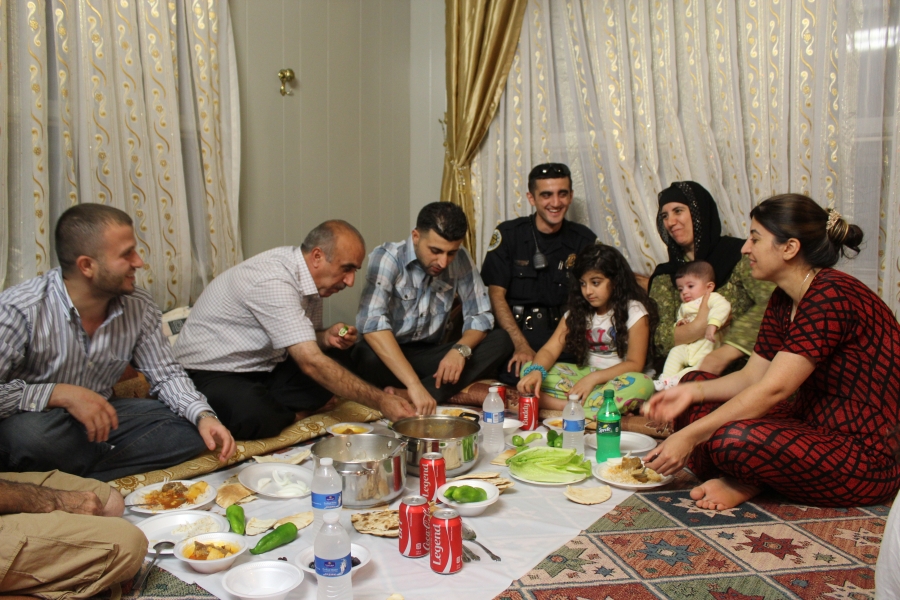 Jiyayi Suleyman, 26, seated at the center, is Nashville’s first Kurdish American police officer. He has a quick bite — stewed lamb and rice — at his parents’ house. He patrols neighborhoods nearby but it not assigned to heavily Kurdish parts of town.
Credit:

Suleyman’s parents live in a middle-class area with brick homes and elm trees, and we make a quick visit to their house. In the living room, Suleyman's father watches the Kurdish news channel. In the 1980s, he was a fighter in the Kurdish peshmerga militia, so I ask him about the current news from Iraq.

Then dinner — rice and stewed lamb — is served on the floor in traditional style. Suleyman has a quick bite and then excuses himself to get back to patrolling. But while he’s busy with police work in Nashville, he’s thinking a lot about Kurdistan. He visited recently and his ties to the region are strong — even down to his first name, Jiyayi.

“Jiyayi means mountaineer,” he says. “That came from my parents and refugees fleeing northern Iraq, and I was born in the mountain region of Kurdistan.”

Suleyman’s shift ends at about 10 p.m. He then shows me something he has mentioned a few times — a Kurdish news report his cousin posted to Facebook. He’s watched it over and over.

It’s about peshmerga fighters in northern Iraq, wounded in a battle with fighters from ISIS. Suleyman’s uncle, a peshmerga commander, is in the video. “He’s been doing this since he was 14, facing Sadaam’s regime and now ISIL,” Suleyman says, referring to the Islamic State in Iraq and the Levant. "It makes us feel proud that he’s defending his country and his people." 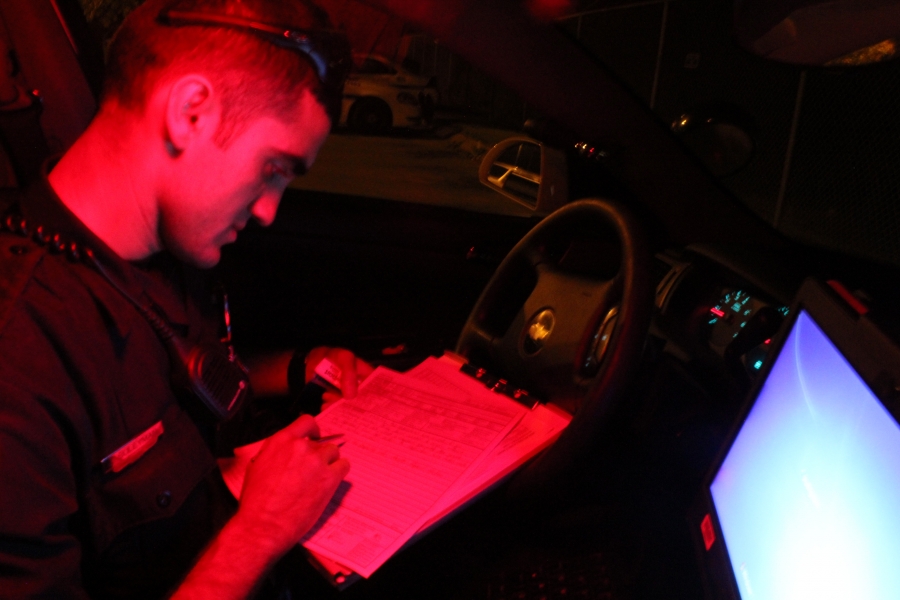 Jiyayi Suleyman, 26, is Nashville’s first Kurdish American police officer. He wraps up his shift late in the evening. His patrol includes some of the city’s toughest neighborhoods.
Credit:

I ask if he ever thought about how life could have been different, if he and his family had stayed in Kurdistan and never left for the US.

“Yeah, I think about that a lot,” he says. “I’d probably join the Kurdish peshmerga forces and would have probably been right there beside him."

But he's happy here in the US. Just as he might have in Kurdistan, he's trying to keep his community safe.