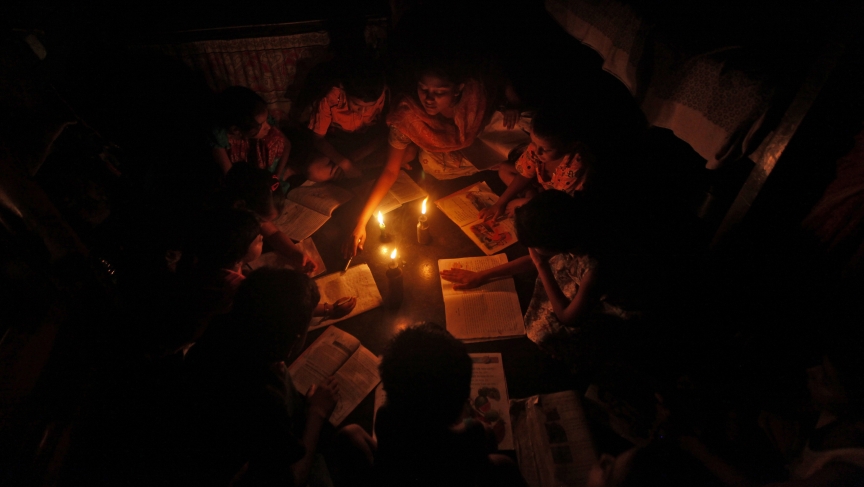 A teacher in Kolkata conducts a lesson during a particularly bad power outage that swept across India in July, 2012.
Credit:

From the mid 1980s to the early 1990s, my family lived in Lucknow, India. When we lost power, all the boys of our three-story apartment complex gathered on the landing of the staircase and played chess and carom. When the sun went down, we went up on the rooftop to play cricket.

The girls and young women came out of their homes and sat on the balcony. To while away the time, they played antakshri, a game of duelling Bollywood songs.

For the past decade, I have been living in the United States. Right now, I am spending the summer with my parents in India, and I realized how much time my parents spend thinking about electricity. My parents now live in a much bigger house than we did when I was a kid. They also own three air conditioners and several ceiling fans, among other gadgets. To keep them all running, they have a power inverter, basically a giant car battery, which stores electricity when the power is on.

During load shedding, when the power supply to some areas is cut, the inverter can run a few ceiling fans and lights bulbs in the house. The battery life in the inverter is very precious to us. It's like a single bottle of water to be shared with six friends who are stranded in a desert with no water in sight for miles. Every drop of water counts, and so does every iota of charge in the inverter. The family tries to stay in one room under one ceiling fan until the power comes back on.

When we do have power, we watch the electricity voltage in a way that is not unlike a heart specialist who monitors the uneven spikes in his patient’s cardiogram or a trader tracking a volatile stock. As soon as the light flickers, everyone’s faces turn grim.

When I am in the US, I take for granted that when I flick the switch on, the light bulb will come on, the coffee machine will work, the plate in the microwave will start spinning and that there will be no fluctuation in the voltage. But even after living in the United States for so many years, when I get a call from the electricity company to inform me a day in advance about a possible power outage for five minutes at 4 a.m., it never fails to amaze me.