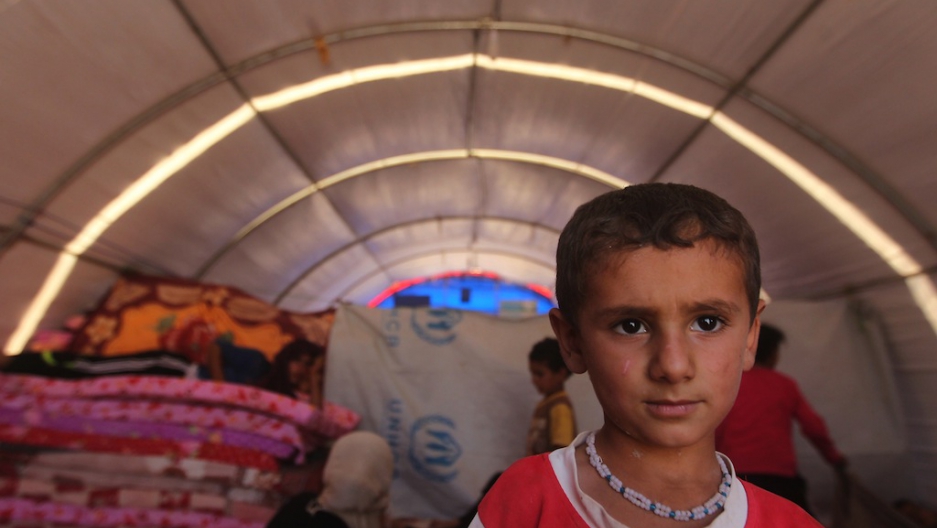 A young displaced Iraqi Yazidi, who fled a jihadist onslaught on Sinjar, stands inside a tent after he took refuge at the Bajid Kandala camp in Kurdistan's western Dohuk province, on August 13, 2014. Time is running out for starving Yazidis trapped on an Iraqi mountain as the West ramp up efforts to assist survivors and arm Kurdish forces battling jihadists.
Credit: Ahmad Al-Rubaye
Share

US Air Force cargo planes have flown seven missions over northern Iraq this week to drop humanitarian aid to Yazidis trapped by the Islamic State on Mount Sinjar in Nineva Province. While the US Central Command won’t specify where these flights are coming from, a little research can uncover more information than the government is willing to share.

As many as 20,000 to 30,000 Iraqis were estimated to be trapped on the 50-mile-long Mount Sinjar range, but the Pentagon's top spokesman declared Thursday, following an assessment by a US military team, that "far fewer" now remain. He credited American airstrikes on ISIL positions with giving those trapped an opportunity to escape over the past several days. And President Obama announced this week that further humanitarian air drops or an air rescue were unlikely, even though a United Nations official stated that “the crisis on Mount Sinjar is by no means over” and many Yazidis remain on the mountain.

Other countries are providing food and water supplies from the air. The UK's Royal Air Force continues to make airdrops over Mount Sinjar, and Australia reportedly made its first drop Thursday.

Agence France-Presse reported that at least some of the US aid has come from Al Udeid Airbase in Qatar, where US Air Force cargo planes are regularly deployed.

Two different planes are being used. One is the turboprop-driven C-130 Hercules, which the US has used since the 1950s. The other is the much larger jet-propelled C-17 Globemaster, which has quickly become a mainstay of military cargo lift missions since the late 1990s.

In these seven humanitarian missions, the typical sortie is comprised of two C-17s and two C-130s. According to Central Command, a total of 114,000 meals and 35,000 gallons of water have been delivered this way so far.

Yet on Tuesday, The Guardian cited reports that some of the American aid disintegrated mid-air after being dropped at high altitude, and earlier reporting from The Telegraph stated that some water containers burst on impact.

According to official Air Force documents, the C-130 can carry a total of 42,000 pounds of materiel, while the C-17 is capable of carrying 110,000 pounds per flight. Used for transporting everything from troops to helicopters, dropping parachutists, and ferrying Obama’s limousine abroad, these planes have been increasingly called upon to carry out a mission not too dissimilar from that of the Berlin Airlift in the late 1940s: dropping pallets of relief aid by parachute to the ground.

In Afghanistan, troops in far off and hard to reach areas came to depend on Air Force cargo drops for food, water, ammunition, and other supplies. Though they found that these drops often went off course, or suffered mechanical failures.

Today cargo can fall with the same precision as the GPS-guided bombs called JDAMs. Short for “Joint Direct Attack Munition,” these weapons are mostly accurate to within 15 meters of their targets.

The Joint Precision Airdrop System is a steerable ram-air canopy connected to a guidance system brings a load of cargo to its target. While accurate, it’s also much more expensive to use than the traditional systems and the US government has been concerned that its guidance technologies could fall into the wrong hands if the JPADS kits aren't recovered by American troops.

In the decades since allied planes dropped supplies to West Berliners, the technology of humanitarian drops hadn’t changed much. Supplies were strapped to a wooden pallet, and once they were pushed from the plane, a parachute opened via something called a ‘static line’ which allows safe separation from the aircraft before the parachute’s canopy fills with air.

The modern system is called the Low Cost Aerial Delivery System (Low Velocity) or LCADS-LV. At just $1,260 apiece, it’s the cheapest and most expendable way to get cargo to the ground, and that’s why the Air Force is using it to reach the Yazidis and others on Mount Sinjar.

Any flight over ISIS-controlled areas would likely stay at an altitude above the reach of the weapons enemy forces are known to have. The likely benchmark for worst-case scenario is the SA-7B Grail man-portable air defense missile. Fired from the shoulder, the SA-7’s missile can reach an altitude of just over 7,500 feet according to a government assessment, and cargo planes may have to stay above that for safety purposes.

That higher altitude greatly compromises the accuracy of cargo drops, though.

The Air Force’s own planning guide shows that the best case scenario for a C-130 is a low-level pass at 600 feet above ground, which would place a single “bundle” on the ground within a 400 meter radius. At that altitude, the faster-flying C-17 could put its bundle in a space 450 meters wide and 590 meters long.

But if the planes had to fly above the SA-7’s reach, the accuracy of a cargo drop falls dramatically. A single container from those planes would land somewhere in a circle nearly two miles wide. And at that distance, the aid may land in inaccessible terrain or simply be too far for refugees to travel. Worst case: it reaches enemy fighters nearby.

By point of comparison, a JPADS bundle dropped from that altitude would land in a circle just 328 yards wide.

With four different variants, the cost of a single JPADS rig is hard to determine, but one 2004 briefing said the Department of Defense’s goal was to bring the price under $60,000 apiece. But an Army document shows that the service paid $7 million in fiscal year 2013 for just 55 of the 10,000-pound JPADS variant at a cost of over $127,000 each.

Central Command’s press releases have cited their air drops as using the “container delivery system” which, when combined with videos showing round parachute canopies, would indicate the LCADS-LV system is being used over Mount Sinjar. It costs about a hundred times less than the precision rectangular-canopied JPADS, but the cargo may land more than ten times farther away.

One estimate puts the number of refugee still atop Mount Sinjar at just 2,000 and notes that some of those present may not want to leave. However, the Pentagon's top spokesman put the number at 4,000 to 5,000 — calling it a "pleasant surprise" that there weren't more found.

So while a full-fledged armed rescue of those remaining by US troops now seems unlikely, based on the assessment made Wednesday night when a team of American personnel landed on the mountain, it is apparent that there is still a need for relief aid to reach those cut off by the Islamic State. Department of Defense officials stated that humanitarian airdrops would cease, but could begin anew if the situation worsens for the Yazidis.

John Ismay is an Overseas Press Club Foundation reporting fellow and graduate of the Columbia University Graduate School of Journalism. He is a former US Navy Explosive Ordnance Disposal (EOD) Officer and veteran of Operation Iraqi Freedom.