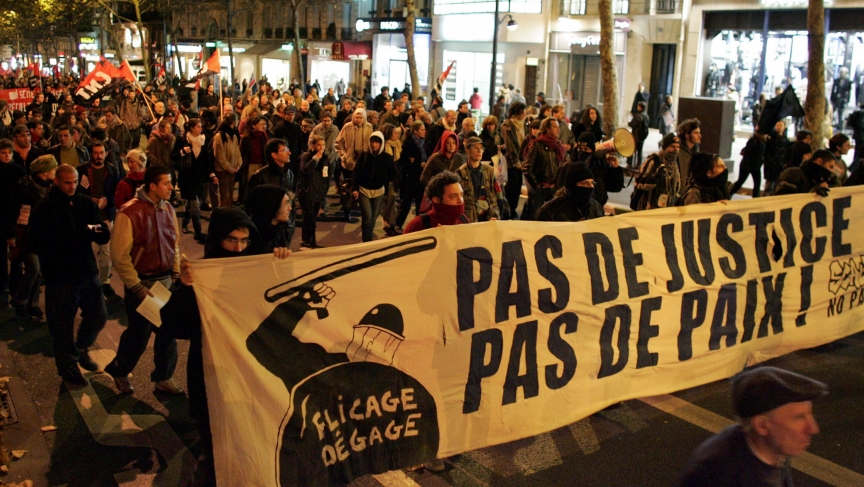 French youth take part in a protest against the government's handling of recent urban unrest in France, at Place Saint Michel in Paris in 2005.
Credit:

Two-thirds of the citizens of Ferguson, Mo., are black — and 52 of its 55 police officers are white. Those lopsided numbers are part of the reason that protesters have taken to the streets in the St. Louis suburb after the killing of Michael Brown.

It's also a reason why tensions have run high. “When you have a situation where a population comes to feel that it’s occupied by a hostile force, even though that’s the national or local police force, it creates a really dangerous environment,” says Christopher Dickey, the foreign editor for The Daily Beast.

Dickey is based in France and the events in Ferguson remind him of the 2005 riots in the suburbs of Paris. They started after an incident in which police were chasing down three teenagers in a minority neighborhood outside of Paris. The teens climbed a wall to get away from the cops, the place where they tried to hide was near an electrical transformer. All three were electrocuted.

“The police were blamed and all of a sudden, really, it felt like all of France was in flames,” says Dickey. Now he sees parallels to the shooting of Michael Brown.

“We don’t know what happened with Michael Brown, but it certainly looks suspicious," he says. "We do know that the Ferguson police force over the years has become infamous for its abuse of different people that it picked up."

On Friday, the Daily Beast reported on the story of one man who was beaten by Ferguson police officers after being mistakenly picked up. The man was then charged with getting blood on a uniformed officer. “That’s the kind of environment that creates trouble,” said Dickey.

The reason why, says Dickey, is simple: “People don’t have guns in France. ... In the United States you have literally millions of guns on the streets. The police have very mixed feelings about it, and if they’re already in a situation where they feel the local population is hostile then they go in very heavily armed.”

The police are also armed with much more dangerous weapons today than they were even just 20 years ago.

“Often they’re not carrying shotguns and pistols — certainly not revolvers like they used to,” Dickey says. “You even see them with AR-15s, M16-type guns, in their cars and that creates an environment that really looks like an occupying army and feels like one.”

As the week has unfolded, the international press has started to cover the story in Ferguson. Dickey has heard many different French responses to the violence in Missouri.

“The first impulse is to say, ‘That’s those Americans.’ The second impulse is to say, ‘What are we really doing to integrate communities that are marginalized in France?’" Dickey says. "And the answer is not very satisfactory. In fact, things are tending to go in the wrong direction with the rise of very far-right-wing parties all over Europe who basically have built their political capital on thinly disguised racism and anti-immigrant policies."