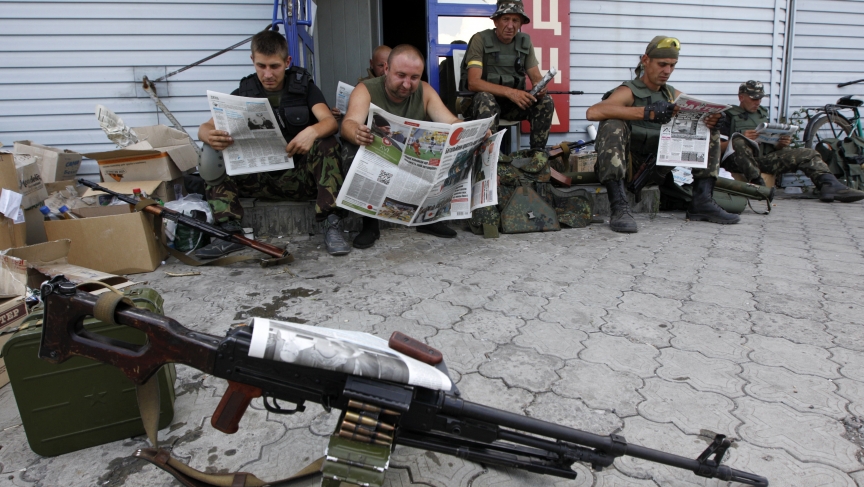 Ukrainian servicemen read newspapers as they rest at a checkpoint near the eastern Ukrainian town of Debaltseve in the Donetsk Region on August 6, 2014.
Credit:

Russia's relentless campaign to restrict media freedom and control the Internet is well-publicized. Now it looks like Ukraine will soon be catching up.

On Wednesday, the Ukrainian parliament gave initial approval to a new draft law that threatens to empower the government to shut down media outlets and block websites in the name of national security. The law, which passed its first reading in parliament, has exasperated local journalists, civil society figures and the international community.

In its initial form, the law — named "On Sanctions" — gave the president and the National Security and Defense Council extraordinary powers to protect Ukraine's interests and security. Authorities would be allowed to block or shut down any television or radio station, or any website, without a court order. Any kind of media or business activity, including Internet activity, would be vulnerable to restrictions or termination. The law would also permit the state to sanction both organizations and individuals, domestic or foreign.

The Ukrainian government, which has endured Russian domination of the media landscape in eastern Ukraine, intended to use the new law to crack down on rogue news outlets and websites that supposedly undermine national defense efforts.

But outrage over the restrictions quickly mounted, and deputies agreed on Thursday to remove and soften most of the censorship measures.

Responding to the parliament's approval of the law's first reading, journalists were among the first to express their outrage and shock. Nastya Stanko of Hromadske TV immediately drew a comparison with Ukraine's former pro-Russian president, Viktor Yanukovych:

Law 4553a [sic]. Even Yanukovych hadn't managed to pull stuff like this.

Ian Bateson, a newly minted journalist for the English-language outlet KyivPost was one of many who saw eerie parallels with what Russia has been doing to its own media:

International press freedom organizations have called the draft law a “major setback for freedom of information in Ukraine." Ukrainian journalist unions have also accused the government of exploiting concerns about national security to introduce censorship. Oksana Romanyuk, director of the Institute of Mass Information, argued the law was well-intentioned but could have dangerous consequences:

The Parliament has just passed in first reading a frankly unfinished draft of bill 4453a — regarding the sanctions. The aim seems noble, [they] should have done this sooner, right? BUT, by hiding behind this aim, they are imposing on us a Yanukovych-style dictatorship—according to the law, the President or NSDC can just decide to limit the activity of any media in Ukraine. Just like that—no court order, no defined limits or clear categories.

Others complained that the sanctions, which are ostensibly aimed at silencing hostile voices based outside Ukraine, instead limited the rights and freedoms of Ukraine's own citizens. Viktoria Syumar, former deputy secretary of the National Security and Defense Council, said the law grants excessive powers and would make Ukraine more like Russia:

This will, unfortunately, lead to bad consequences. If we accept the formula that we can shut down anyone who dares to criticize the authorities, I'm sorry, but that will lead us into Russia.

Syumar conceded that officials would be unlikely to enforce the law widely, if it is eventually adopted. Authorities would probably impose the new regulations selectively, flaunting targeted cases to scare the larger public.

Adopting such a norm does not necessarily mean it will be used, but it does mean quite a heavy hint to mass media owners about what might happen to them if they choose not to support the state line during a difficult period for the country.

Ukraine, for its part, boasts a far more vibrant civil society than Russia, with many of the activists still raw and angry after the Euromaidan protests and the slow-moving anti-corruption investigations that followed.

The draft law brought to mind the ill-advised anti-protest law that Yanukovych and his parliament adopted in January 2014, which also mimicked oppressive legal restrictions and regulations devised in Russia. Officials rolled back the anti-protest law less than two weeks after passing it, but the political damage to the Yanukovych regime proved irreparable.

Parliamentary deputy Mykola Tomenko, head of the parliament's committee on freedom of speech, told the press on Thursday that they were working to exclude media censorship from the draft law. Recognizing the measures as undemocratic, the committee proposed amending existing media laws to allow for sanctions against newsrooms that encourage separatism and terrorism.

But amendments to those laws would still simplify imposing bans or limiting media activity. Although these amendments seem like improvements, they are still aimed at making it easier to shut down media outlets with inconvenient agendas.

With Ukraine in turmoil and many Ukrainians skeptical of the new government's ability to act on its promises of transparency and democratic governance, the government will face increasing scrutiny any time it tries to push through restrictive Internet and media regulations. The authorities in Kiev are caught trying to appease Western demands for greater media freedom, while simultaneously resisting Russia's onslaught in the east and on the airwaves.

This story by Tetyana Lokot was originally published on Global Voices Online, a community of bloggers from around the world.