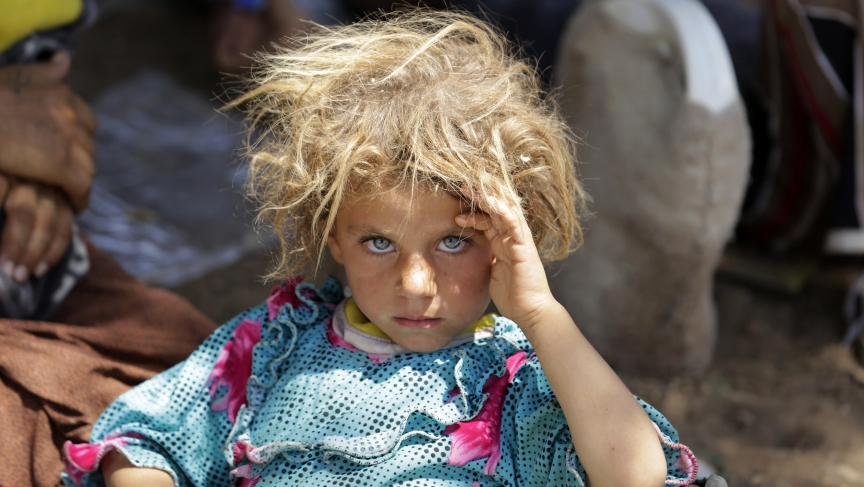 A girl from the minority Yazidi sect, fleeing the violence in the Iraqi town of Sinjar, rests at the Iraqi-Syrian border crossing in Fishkhabour, Dohuk province August 13, 2014.
Credit:

For more than a week, tens of thousands of Yazidis have been trapped on a mountaintop in northern Iraq, threatened by ISIS militia. Today, President Obama said their situation has improved, thanks partly to American airdrops of supplies and air strikes against the militants, and that many had escaped.

Earlier this week, 18 US Marines and Special Operations soldiers landed on Mount Sinjar to evaluate if the US should organize an airlift to evacuate the Yazidis. The US deemed an airlift wasn't necessary and believes only a few thousand of the group are still on the mountain. The New York Times reports that Yazidi leaders and UN humanitarian officials insist the crisis on the mountain remains and that many thousands of Yazidis are still in danger.

The US Border Patrol actually releases many of the Central American families who turn themselves in or are captured at the border. Rather than putting them in detention centers, officials allow them to join family or friends already in the US, while they wait to appear before an immigration court. Many get left at bus stations to start a cross-country journey, after weeks of traveling north on foot.

PRI's The World profiles some of the Texans who volunteer to help the disoriented families, as the immigrants face their first moments of freedom in the US. Often the help is simple: a bath, a meal, some donated clothes and some guidance about how to navigate in a new country. And many will wait a long time for that court appearance. We explain why the courts are so backlogged in this video.

Here's why the police seem outfitted for war in Ferguson, Missouri

Images coming out of Ferguson are shocking many Americans. Photos show scenes of tear gas and police with armored vehicles, assault rifles, body armor and night-vision goggles — all deployed to put down citizen protests over the police killing of Michael Brown, an unarmed black teenager. Some claim the police reaction has created a "municipal war zone" and has spurred unnecessary violence.

PRI's The World explains that some local police forces became outfitted with military gear due to government programs started in reaction to 9/11. In fact, some of that equipment is actual military surplus. And protesters say that, rather than deterring them, the police reaction is raising their anger and determination.

Gazans tweet tear gas advice to the protesters in Ferguson

Palestinians in the Gaza Strip know a thing or two about US tear gas. They say Israel's military uses it on them. So when Gazans saw photos on Twitter of tear gas being used in Ferguson against Americans protesting the killing of Michael Brown, they felt solidarity.

Some tweeted their support: "#Ferguson looks like #Bahrain, looks like #Palestine, looks like #Egypt it looks like an injustice. It always looks the same. #Solidarity." Others gave more practical advice: "Remember to not touch your face when teargassed or put water on it. Instead use milk or coke!" Quartz has the Twitter stream showing how crisis makes for unusual bedfellows.

Women's rights are not as new as you may think

More than 3,000 years ago in Egypt, women and men had equal financial rights. Women could buy and sell property, enter contracts and file suit, as well as serve on juries. In ancient Rome, women were able to seek divorce, though the husband had the right to keep the kids.

The Guardian lays out a timeline showing some of the ups, and frequent downs, of women's rights from Cleopatra to today. Take a guess at when Iceland became the first country to institute equal inheritance rights for men and women. Hint: it wasn't in the last hundred years.

Gee-whiz video of the day: @Tmgneff breaks down the gear police are using in Ferguson. http://t.co/cnMzBjHhSF pic.twitter.com/OrHsZFbnf8

"Each year some of the world’s most dramatic storms form over the Pacific Ocean before churning across the sea and slamming into the coast of southern China." So starts a two-part, multimedia series by the South China Morning Post chronicling the many devastating typhoons that have hit Hong Kong over the last 140 years. The three deadliest had one thing in common: an abnormal rise in sea levels. Which means the expected rise in sea level and increase in storm surges from climate change could pose even greater future threats.