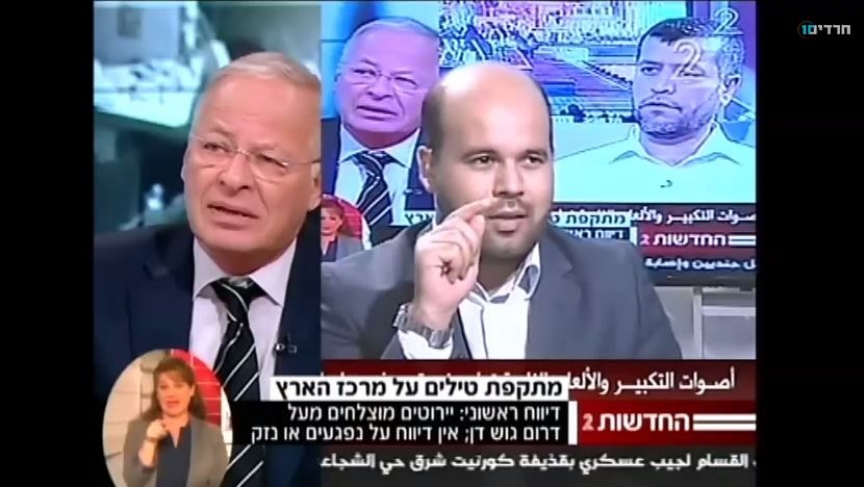 After a brief firefight yesterday, Israel and Hamas are back on track with a new five-day ceasefire. Negotiators from both sides are holding marathon talks in Cairo to come up with a lasting truce — a difficult task made even more difficult with Israel and Hamas refusing to talk to each other directly.

But there’s one very public line of communication where direct conversation is possible — on television.

It started as an experiment. During the last round of fighting between Israel and Hamas in 2012, Israel’s leading TV news station — Channel 2 — was broadcasting the war live. While veteran Middle East affairs commentator Ehud Yaari sat in the Channel 2 studio near Jerusalem, a large screen behind him projected a live feed of Hamas TV from Gaza to show Israeli audiences how Hamas viewed the war.

It turned out Hamas TV was doing the exact same thing: A Palestinian commentator in the studio was broadcasting with a live feed of Israeli Channel 2 behind him.

“At one point I decided, why shouldn’t I try to talk to him?” said the 69-year-old Yaari, a veteran journalist with neatly combed white hair. “So I started to engage him.”

It was a remarkable feat: The two television stations were broadcasting each other live — a kind of know-thy-enemy approach. But instead of just observing the enemy, Yaari decided to chat him up on live television.

“I’ve watched you for years, ever since I was in Israeli jail,” the anchor said. “You are very good.”

“Thank you,” Yaari said. And then they got talking about the war.

“They were trying to tell me, 'But we are winning, we have the upper hand, etc.' So yeah, I said to them, 'You know you are not going to score a victory,'” Yaari remembers. Their chat lasted less than two minutes, but it opened an unprecedented public dialogue between Israel and Hamas.

It's a complement to another, more private dialogue he maintains with the militant group. Yaari is a journalist and a fellow at the Washington Institute for Near East Policy, but he's also something of an intelligence operative. In his tiny office, which is walled with television screens, he and his staff monitor some 300 TV channels from across the Middle East. Yaari said he speaks almost daily with senior Hamas officials, who give him messages for Israeli Prime Minister Benjamin Netanyahu.

On Thursday, for example, Hamas officials asked him to pass the word to the prime minister to ignore their public statements, indicating that different things are being said in negotiations behind closed doors. Sometimes he’ll communicate these messages to Israeli government officials, but he says he is not Hamas’ mailman.

During the most recent conflict, which began last month, Yaari tried to reopen his public line as well. He says he wanted to "create that kind of dialogue, at least on television, which does not exist anywhere else.”

Yaari said his TV station and the Hamas station often carried each other live, and he tried to talk to the Hamas anchor. He says it worked twice. Other times, like in this clip, the Hamas anchor said he wouldn’t speak to Zionists.

Still, it was gripping television. “At one point what you had on screen — both on Hamas and on our screen — was my own picture quadrupled because we were carrying them carrying us carrying them,” Yaari says. “So it created a very, you know, psychedelic picture.”

Debra Kamin, a Tel-Aviv based journalist who covers Israeli media and wrote about Yaari for The Atlantic, says Yaari’s on-air dialogues with Hamas anchors have served an important role.

“We don’t have any sort of access to those negotiation rooms and we don’t know what’s going on there. But if we are on our couches watching the news, we can see exactly what Ehud Yaari is saying to the anchor in Gaza,” Kamin says. “Maybe that conversation is even more important because it involves the public. He’s one of the few real connectors the Israeli public has to the other side.”

Yaari downplays all of this, saying his conversations with Hamas anchors on screen have failed to help push things forward. “It’s a television moment. No more,” he has said. Even off screen, Yaari says, his direct communication hasn’t brought Hamas officials closer to publicly recognizing Israel or giving up armed conflict.

But that doesn’t stop him from talking to them.