Carlos Garcia, an immigration attorney in McAllen, Texas, volunteers his time once a week to help newly arrived migrants understand the legal immigration system they're about to enter.
Credit:

US Border Patrol has a choice to make with Central American families who have been captured or turned themselves in at the US-Mexico border: send them to short-term detention facilities or release them to stay with family already living in the US as they await their dates in immigration courts. For families released, the transition — those first few minutes of freedom on US soil — can be exciting, frightening and overwhelming.

In McAllen, Texas, migrants are typically released at the downtown bus station. There, they wait for a few hours, perhaps overnight, for their bus to Houston, New York, Kansas City or wherever. Many haven’t had a chance to bathe or perhaps brush their teeth in weeks. They’ve travelled for 10, 20, or 30 days through Mexico to reach this point.

This summer, the numbers of migrants waiting at the bus station rose dramatically with the surge of migrants coming up from Central America. The Sacred Heart Catholic Church decided to open its doors and set up a way station of sorts, inviting families in for a few hours.

“It’s a place where mothers and children can come and rest for a little bit. It’s a place for them to catch their breath,” said Brenda Riojas, with the Diocese of Brownsville, showing me around the assembly hall of the McAllen church.

“We see them come in, they’re exhausted, they’re hungry, they’re a little lost, a little disoriented because, basically, they’ve just been dropped off at the bus station, and they just know they need to buy their tickets,” said Riojas. “But they don’t really know how to navigate the bus system, that there’s going to be bus transfers, etc. So, here, we also give them a sheet that says, ‘I don’t speak English, please help me find my bus.’”

They also give them a warm meal, a shower and a place to lay down.

Some days, the church and volunteers help 40 people, other days closer to 200. They arrive in groups several times throughout the day. During the morning I was there, about 30 arrived, mothers with children, babies to teenagers.  When they entered, the volunteers began clapping, giving them a round of applause. 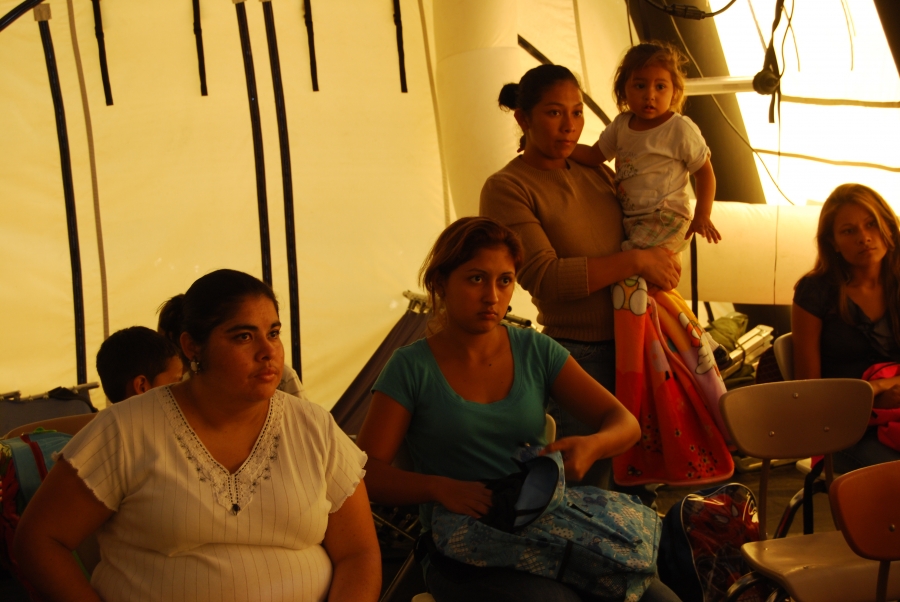 Migrants from Central America listen to volunteer attorneys who explain the legal process in US immigration courts.
Credit:

Each family was quickly paired with a volunteer, like Susan Joiner. She drove down from Austin with a church group.

“Why did I come? I wanted to serve. We love children, and as soon as we heard the need, we looked at each other and said, ‘We’re going,’” Joiner said.

When members of the family Joiner was helping were off having a shower, she went shopping for them, digging through piles of donated clothing. Joiner and some of the other volunteers took this assignment very seriously.

“Look how small these are, get him some nice jeans,” another volunteer said to Joiner, a mild scolding.

After the family members were clean, Joiner gave them their new wardrobes.

“And then everybody says, ‘muy bonito,’ [very nice] they smile and their dignity is restored,” Joiner said.

Then it was time for a warm meal. I sat with Vilma from Honduras who was eating with her three children — two sons and a daughter, ages 12, 14 and 16. Their father is dead.

Vilma told me her journey took three weeks — walking, taking buses, and finally a raft across the Rio Grande River. They turned themselves in to US authorities about 20 minutes after crossing the river.

Vilma said the worst part of the trip was the eight days spent in a Border Patrol detention center in McAllen. She said agents put her two young sons in a separate cell, and she didn’t know where they were or how they were faring. She said agents wouldn’t provide her any information. (At detention centers, older boys are isolated, by age groupings, in separate cells, while mothers with small children and girls are grouped together. The large cells can hold about 40 people.)

Vilma says she left Honduras because gang members beat her up, tried to rob her, then trid to take advantage of her teenage daughter. She said her two sons fought them off. Then the gang threatened revenge. With few options, and fearing for the lives of her children and herself, she set out north to be with her sister in Dallas.

Riojas, with the diocese, said she hears stories like this every day. To her, Vilma and her children aren’t in the US as “illegal aliens,” they’re refugees.

“And for those who think the solution is to send them back immediately, how can you send someone who is fleeing a fire back into that fire?” Riojas said. “They’re coming here for a chance to live.”

After a meal, the families went into a large, temporary tent with a generator blasting air conditioning. It was more than 100 degrees outside. There, they met Carlos Garcia, one of about a dozen immigration attorneys who volunteer an hour or two a week to make legal presentations.

“I’m telling them right now that there’s two processes. One is that they have to show up with a deportation officer as soon as the date that they gave them. Then the other one is they’re going to show up in immigration court. So it’s a little bit confusing," Garcia said.

Garcia is thorough and patient and speaks with the women individually as well as to the group. Most of the women don’t ask any questions. A few told me later they didn’t really understand much of what he said. It’s a lot to take in, and they have only a few weeks to figure it out — where to go, how to find and then pay for an attorney, and then build a case to seek asylum in the US.

Roughly half of people seeking asylum in the US will win and half will lose, by the numbers. It's harder for Central Americans fleeing gangs to win a case, because asylum laws only help people fleeing persuction due to race, religion, nationality, membership in a particular social group or political opinions. Fear of gang violence, which is what most Central Americans are fleeing today, is not covered. Children can also seek Special Immigrant Juvenile Status.

After the legal presentation, some of the families retreated to another air conditioned tent for naps. For other families, it was time to head to the bus station.

I went to the station and found Vilma from Honduras, the woman who I met during lunch. I asked how she felt.

“Much better,” she said.

“I’m nervous though,” she added. Understandable.

Moments later, it was time to board the bus. Vilma walked off with her three children and a tote bag filled with donated food and drinks. A church volunteer gave her a kiss on the cheek. Then Vilma and her kids disappeared behind the bus’ tinted-glass windows.

The volunteer turned and headed back to the church to help a new family.