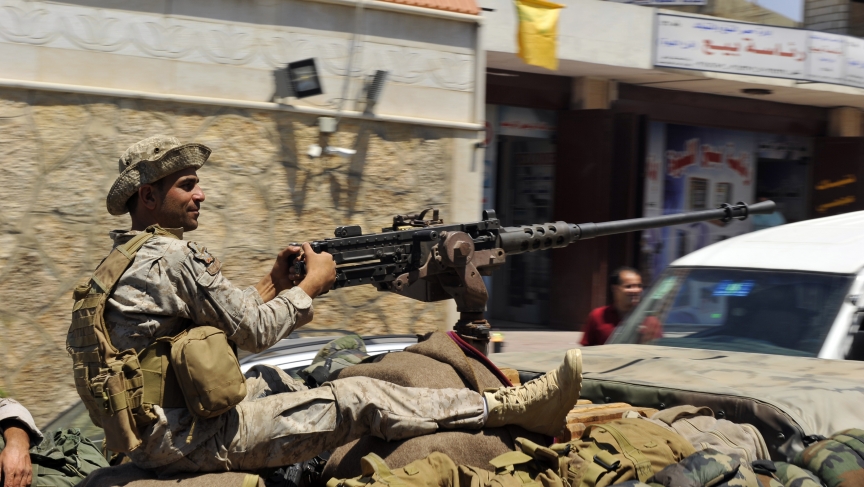 A Lebanese army soldier holds on to a machine gun in the town of Labwe in the eastern Bekaa Valley during clashes with Syrian rebel fighters.
Credit:

With the eyes of the world on ISIS' advances in Iraq, members of the group, alongside other Sunni extremsits, pushed from Syria into the Lebanese border town of Arsal last week in a protracted and unprecedented fight with the Lebanese army.

While the town has been the target of shellings, airstrikes and border incursions in the past, this concentrated move by ISIS and Jabhat al-Nusra, a fellow Sunni extremist group, was a significant escalation by the militants. The extremists briefly took control of Arsal, which has been a major hub for Syrian refugees fleeing the violence as well as a pit stop for militants crossing the border to fight. They also fought the Lebanese Army in the kind of sustained combat that has previously only been seen across the border in Syria.

The fighters captured 19 soldiers and said they would let them go in exchange for the release of other Islamic militants held captive in Lebanese prisons, according to news reports. Lebanese and Syrian Sunnis in the area sometimes accuse the Lebanese military of having links to Hezbollah and other Shiite parties, and the fighting broke out after Sunni rebel commander Imad Ahmad Jomaa was arrested in Arsal by the army last weekend.

Many residents fled the area after the fighting began on August 2, but others were caught in the violence over five days of fighting. At least 17 soldiers, 50 militants and 40 civilians were killed, according to the Daily Star, a Beirut newspaper.

As the Lebanese army entered the town on August 8 after the militants retreated, the Daily Star's Kareem Shaheen tweeted updates from the area highlighting the plight of residents:

2,000 Syrian refugees stranded on Lebanon border because they think going to Assad better than staying in Arsal. Think about it for a moment

Dozens of families streaming back into Arsal right now. Security won't let journalists through though.

According to Shaheen, security concerns kept residents from returning to their homes.

Lebanese Army is sending back families that tried to return to their homes in Arsal. Appears security not entirely under control.

Nadim Houry, Human Rights Watch deputy director for Middle East and North Africa, noted that residents of the area have been largely ignored in discussions of ongoing incidents.

Indeed, much of the discussion in Lebanon focused on demonstrating support for Lebanese soldiers across social media platforms in a show of national unity and rejection of sectarian divides. An initiative to support the army invited people to donate goods or volunteer according to their skills. Photographs of soldiers who died during the clashes circulated online, like this post by a telecom company on Facebook. A local anchor even wore the army's uniform while presenting the news: