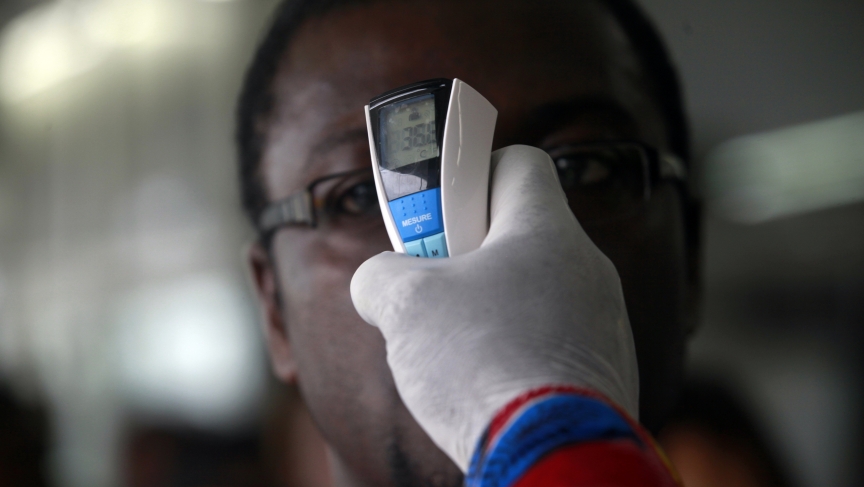 He's battled AIDS in rural Haiti and drug-resistant tuberculosis in the slums of Peru. So Farmer wasn't surprised when he flew from Sierra Leone to Rwanda a few weeks ago and was greeted by medical personnel right away. "My temperature was taken with a hand-held device at the airport," Farmer says.

"If I had come here with a fever from Sierra Leone, I would have been placed in isolation." And he hadn't been singled out. All the passengers flying into Kigali from the countries at the epicenter of the Ebola outbreak — Guinea, Sierra Leone and Liberia — are now checked for fever, a symptom of Ebola.

Farmer is the co-founder of Partners in Health, a global nonprofit that helps build health services for the rural and urban poor in many of the world's most needy countries. He also runs the Department of Global Health and Social Medicine at Harvard Medical School. Farmer was in Sierra Leone for a surgical conference last month as the Ebola outbreak was spreading, and he sees the temperature-taking as a positive sign that countries in West Africa are starting to create preventive health care systems.

"Building those systems take significant investment," he admits, but he argues it wouldn't cost hundreds of billions of dollars — sums that have already been spent on many less useful initiatives in Africa. And besides, he says, "many of us have long argued that not building them is far more costly."

Farmer would like sub-Saharan African nations to build health systems from the ground up, with community health workers, clinics and hospitals for those who are critically ill.

"But they need the support that all of us need if we're going to be health care providers. And that support again requires tools for diagnosis, for care, and for self-protection. If we are willing to invest in these systems, we'll always find people willing to take risks to help serve the rest of humanity."

The one thing that's different about the current Ebola outbreak, Farmer says, is the global media attention it has earned.

"What did surprise me was how rapidly the rest of the world came to see that this was a serious problem." Farmer says in previous Ebola outbreaks, the media attention was "a flash in the pan."

"It's my hope that there will be some sustained attention to this, and that we will really try and build a global equity plan," he says. "It's a privilege to help think through these problems, like how do we build health systems that can reach from a village, a rural village, into a town and into a city."