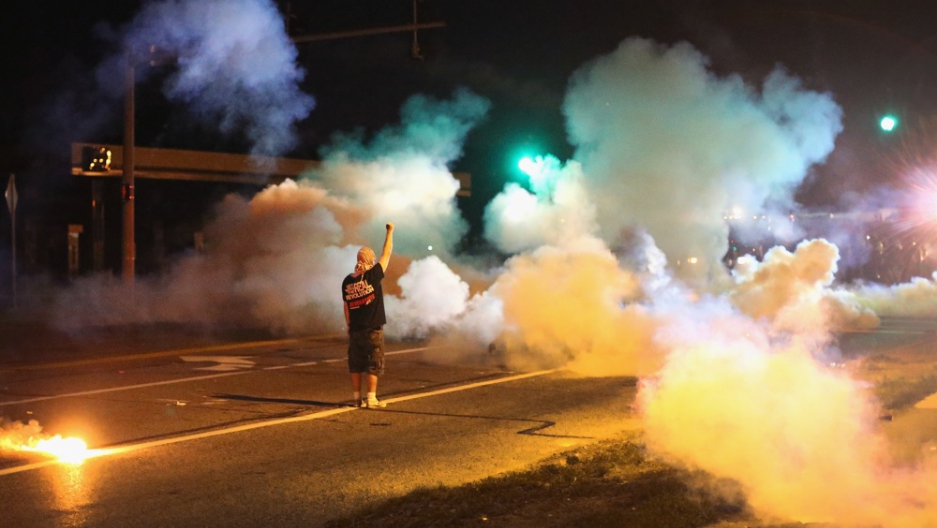 Ferguson, Missouri looks like a war zone right now, thanks to the presence of police officers clad in military riot gear, perched on military tanks, aiming military rifles. Basically, this:

This is unacceptable - #Ferguson pic.twitter.com/YbAsf7uQEh

This is a police department?!! What kind of world are we living in #Ferguson? pic.twitter.com/E1MbQppJYP

Here's a look at the munitions being used in Ferguson.

It's all to quell protests against — yup, police brutality. On Aug. 9, a police officer shot and killed an 18-year-old teenager named Michael Brown, who was walking home with his friend Dorian Johnson. Michael was unarmed. He is also black. The police officer shot him multiple times and left him in the street.

Unsurprisingly, this incident exacerbated racial tensions in a town that is 70 percent black and has a police force that is 94 percent white. In the past two weeks alone, four (unarmed) black men have been shot dead by police across the country, marking a disturbing trend.

Following Brown’s funeral, attendees marched on Ferguson’s police headquarters to protest the shooting. The police responded with SWAT teams in full riot gear and the situation has only escalated from there.

Now, nightly protests in Ferguson are met with SWAT police firing rubber bullets. Journalists are being arrested. And the police are aggressively preventing reporting on the situation.

Tear gas, we should note, is a chemical agent banned in international warfare. The events in Ferguson have largely unfolded on social media, with mainstream US news busy covering Iraq, Syria, Ukraine and Kim Kardashian. Across the Twittersphere, people are demonstrating solidarity with pictures like this.

And Palestinians half a world away, protesting the Israeli occupation of Gaza, have noticed similarities between armed military police in Ferguson and Israeli Defense Force soldiers. One reason for the similarities? The US military is responsible for arming them both. The Pentagon gave the Ferguson police department military-grade weapons. It's part of a program where the Pentagon unloads its surplus supplies — including heavy armored vehicles like the ones used in Afghanistan and Iraq — on local police departments.

So Gazans expressed solidarity and some began sharing tips for dealing with soldiers and tear gas.

Palestinian citizens are tweeting to the resistors in #Ferguson with support & tips on dealing with tear gas! #gaza pic.twitter.com/5WeHzsqPKN

It feels so weird using my experience from #Palestine and Israeli oppression to give advice to #Ferguson. Much love and solidarity!

Excessive force tactics have also been directed against journalists. Two were arrested last night, and tear gas was hurled at Al Jazeera journalists preparing to broadcast. Naturally, they tweeted tips on how to avoid/mitigate the effects of tear gas:

It seems that tear gas really does unite us all.

Some have noted that images of Ferguson are almost indistinguishable from protests in Cairo.

But don't be quick to compare the situation to Egypt, as if to ask: “Wow, how could it happen in the US?” That would kind of ignore how long systemic violence against blacks has been a problem in the United States.

You know, you don't have to make comparisons to foreign places when you see photos of Ferguson. Cause that has ALWAYS happened HERE to US.