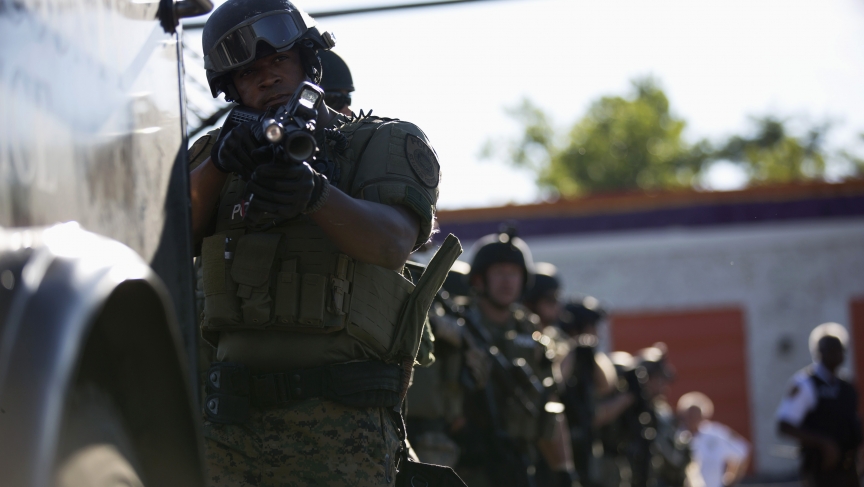 A police officer holds his riot gun while demonstrators protest the shooting death of teenager Michael Brown in Ferguson, Missouri, on August 13, 2014.
Credit:

The aftermath from the police shooting of 18-year-old Michael Brown over the weekend can still be seen on the streets of Ferguson, Mo. Last night, the protests in the St. Louis suburb started to look more and more like a war zone.

“I know that many Americans have been deeply disturbed by the images we’ve seen in the heartland of our country as police have clashed with people protesting,” President Obama said at a news conference Thursday.

The White House has asked the Department of Justice and the FBI to independently investigate the death of Brown along with local officials on the ground. “The Department of Justice is also consulting with local authorities about ways that they can maintain public safety without restricting the right of peaceful protest and while avoiding unnecessary escalation,” the president said.

But descalation seemed far away on Wednesday night, according to Jelani Cobb, a contributor to The New Yorker and the director of African American Studies at the University of Connecticut. He's currently in Ferguson and says that “what I saw there was very reminiscent of a combat zone." 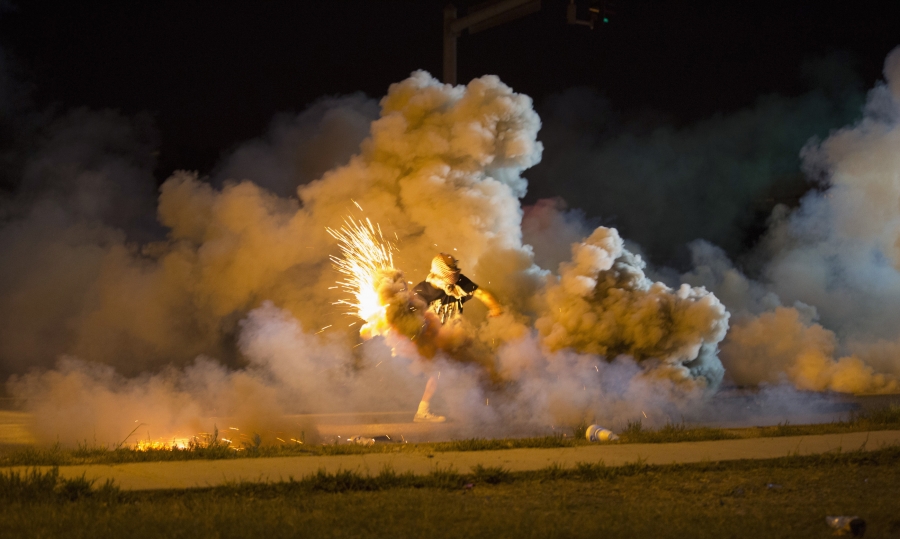 A protester throws back a smoke bomb while clashing with police in Ferguson, Missouri, on August 13, 2014.
Credit:

Cobb says that police in the area remain aggressive despite calls for peace from community leaders and Michael Brown's family.

“There was a real climate of hostility emanating from the police,” Cobb says. “It was almost a given — everyone knew that when night fell, there was going to be some kind of activity that took place.”

While many contend that people from outside the community are inciting violence, Cobb says there is long-standing tension between the overwhelmingly white police force and the citizens of Ferguson, nearly 70 percent of whom are black.

“The veil of secrecy that has surrounded the investigation has done nothing to alleviate the tensions,” Cobb says. “People here think the secrecy — particularly of not releasing the name of the officer — that the secrecy here provides a great deal of leeway or a great opportunity for collusion. When the name becomes available, people really don’t know if there’s been coordination in terms of stories.”

Ferguson Police Chief Thomas Jackson contends that the officer involved in the incident had reportedly been hit and suffered swelling on the side of his face. But Cobb says without knowing which officer was involved, it is impossible to independently verify that information.

“No one has seen him; no one knows who he or she is,” Cobb says. “It’s very difficult to develop any trust in that context.” 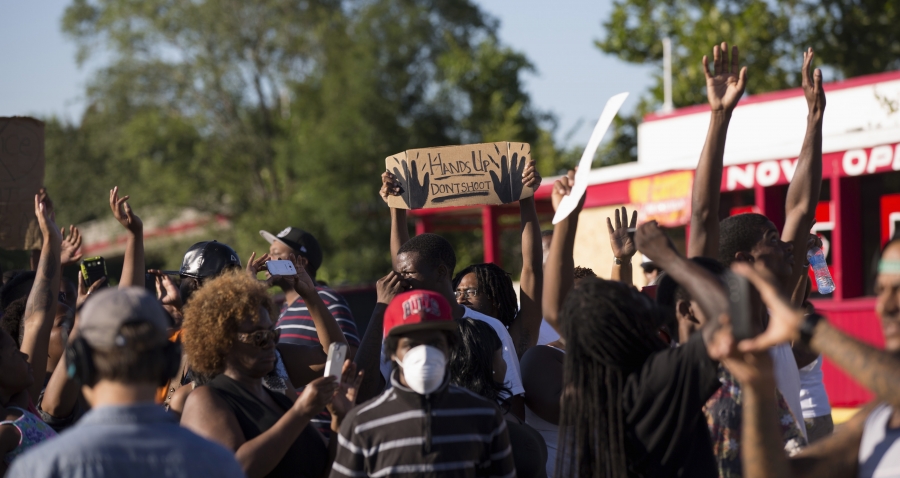 Demonstrators raise their hands while protesting the shooting death of teenager Michael Brown in Ferguson, Missouri, on August 13, 2014.
Credit:

While protests initially started as a way to show solidarity with Brown and his family, Cobb says individuals in Ferguson are increasingly worried about the militarization of the police department. Last night, Cobb says, the streets were blockaded and the police were out in riot gear.

“[It] is perhaps understandable given that there have been incidents of looting and some vandalism,” he says. “But what was atypical and what was shocking to see is these police officers had two armored personnel carriers that were nose-to-nose, that were blocking the street. Many, if not most, of the officers had on some kind of military fatigue garb.”

Officers also sat on top of armored vehicles with high-powered assault rifles — Cobb says it looked like some kind of “sniper’s nest.”

“This is like municipal shock and awe,” he says. “They ordered the crowd to disperse around 8:30 and began firing tear gas. They continued to tear gas that community for up to two hours after that, such that there was a large white cloud looming over that entire neighborhood.”

In addition to tear gas, Cobb says that police fired rubber bullets and threw flash grenades. "It was hard to understand what threat justified this," he says.

This story is based on an interview from PRI's The Takeaway with John Hockenberry, a daily show hosting America's conversation on important news and issues.