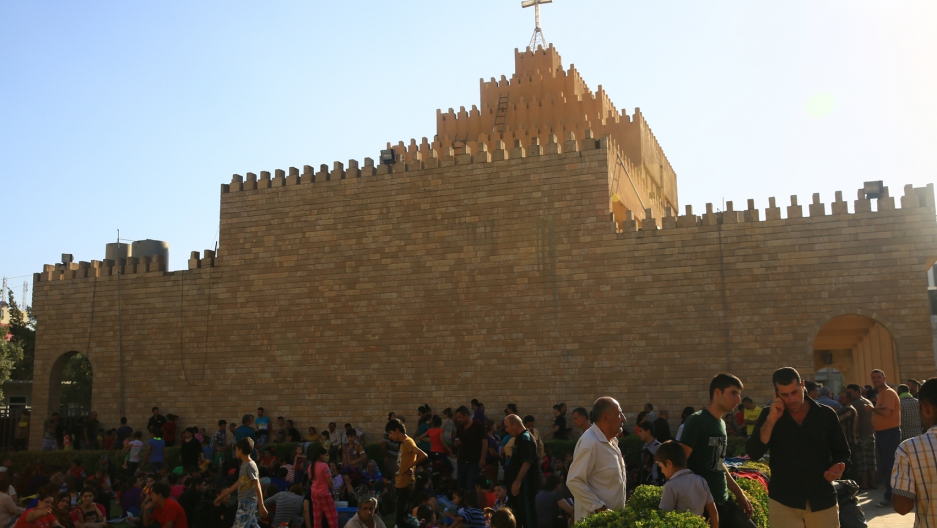 ERBIL, Iraq — For more than a week, displaced families have occupied every inch of St. Joseph’s church grounds. Some have a few belongings they managed to gather as they fled their homes. Others have nothing but the clothes they wore. The line for the church complex’s three toilets is unbearable.

At a press briefing on Thursday, President Barack Obama praised the US military forces participating in humanitarian airdrops for Yazidis trapped fleeing the Islamic State (IS). But he reassured viewers that the need for additional humanitarian drops was probably over and that "the majority of the military personnel" involved would be leaving “in the coming days.” As for the other minorities displaced by IS, including Iraqi Christians, “the situation remains dire," the president said. "We’re going to be working with our international partners to provide humanitarian assistance.” No concrete plans were offered.

For the Christians now in Erbil, the statement won’t offer much comfort. They want to leave Iraq for good. And they fear the international community has forgotten them.

For these families, displacement and violence is nothing new. This is the latest, albeit the most extreme, in a long line of threats to their minority group here in Iraq. But this time they say enough is enough. IS has now pushed many of these families, once determined not to leave their homeland, to call for migration.

“No more Iraq!" shouted one man outside St. Joseph's.

“We have nothing here anymore. We are homeless and penniless. Iraq is over for us. We do not trust this country,” said another.

“The people want to flee from Iraq and that’s it! Enough is enough. How many times do we have to be attacked, displaced, killed. The only thing left is to protect the people that are left. The church is not the stones — the people are the church and we can build a new church anywhere. Not here, not anymore."

As a crowd gathered, others called for European nations to open their borders to Iraq’s displaced Christians, which here in the Christian district of Erbil number more than 100,000. Others called for greater foreign military intervention to defeat IS.

Christians in Iraq have been increasingly targeted by kidnappings, bombings, theft and assassinations since the fall of Saddam in 2003. The power void that followed the US invasion and the ensuing power struggle between Iraq’s ethnic and religious majorities escalated into a sectarian conflict with minorities, like Christians, caught in the middle.

But this latest push by IS into the Nineveh plains, the homeland of Iraqi Christians and other minority groups, has stolen their last relatively safe haven and left these families with nowhere to go.

“We hate violence but we are surrounded by it,” said Heam Marzana as she sat in the church grounds with her children. “We don’t want food, or relief aid — we just want to leave.”

For Marzana’s son Andy, time is crucial. An electrical accident in February left his right leg and hand severely deformed. In June, he was supposed to receive an operation that could save his leg in Mosul. But instead, he ended up homeless and sleeping here.

Heam Marzana and her son Andy take shelter in a church in Erbil.(Tracey Shelton/GlobalPost)

This is the third time the Marzanas have been displaced and left destitute by Islamic extremists that view Iraq’s Christian minority as infidels. In 2006, at the height of Iraq’s sectarian conflict, Andy’s father was shot in the streets of Baghdad. The family was forced to leave their home at gunpoint. Abandoning everything behind, they fled to Mosul. Last month, IS forced all Christians to leave the city, confiscating everything they owned. Andy and his family fled to Qaraqosh, Iraq’s largest Christian town, but this too was overrun by IS militants last Friday.

“We want to be taken out of this country. Are they waiting for them to butcher us all?” said a family friend as he sat with Andy.

Even here, in Erbil's churches, the welcome has not been overwhelming.

“When we arrived here yesterday, they didn't accept to open the grounds of the church for us,” said Firas, an English professor from Qaraqosh, in an interview last week. “The vicar said, 'You have to receive them. They are homeless, penniless.' So they opened their doors and we slept here in the garden.”

As if on cue, an announcement began over the church loudspeakers.

“I am a religious man,” spoke the voice Firas identified as Father Nicodimous. “What can I do to help you? What can bishops do? What can vicars do? How can you ask a religious man to protect you or to provide for you or to take you out of Iraq? Don’t insult the bishop.”

Firas explained that many had been asking the church for material help and assistance with emigration. Volunteers had provided food for the masses, but only plain rice with tomato paste.

“In our homes we have never eaten something so bad, but here we were queuing to get this food,” Firas said with a laugh of resignation.

Church volunteer Duras said he prepared seven pots of soup and 150 kg of rice for a single meal, but it was still not enough to feed such crowds of people.

Back in the church grounds an argument over immigration or increased strikes against the Islamic State ensued.

“Who is responsible for our protection — everyone promises protection but no one does anything. Either take us out of Iraq or we go back to Qaraqosh and the Iraqi government or the Kurdish forces must come with us. We need protection or immigration,” said one man who gave his name as Tibith.

“No! No! No!” shouted a woman in the crowd. “The Iraqi army can’t protect us. They ran away, the peshmerga ran away. We can only leave. No one can protect us here.”

“Where is the international community?” replied Tibith, as he waved a Bible clenched tightly in his fist. “They are going to open their borders for Gaza, they are ready to offer everything for the Palestinians. But they are bombing Israel too — they are fighting. We didn’t fight, we didn’t bomb, we didn’t kill anybody. Britain, Germany and France they are going to open the borders over there, but they are not looking over here.”

More from GlobalPost: Hundreds of thousands of minorities in Iraq are fleeing the Islamic State

Across the road from the church, a building site has become home to yet more displaced Christian families, including Aziz Yousef, who believes the obstacles to emigration are not only external.

“Politicians and church leaders are making obstacles for us to leave,” he said, adding that France had offered to take Iraqi Christian immigrants but the church in Erbil had blocked applications. “The church is trying to push us to remain in Iraq without giving us anything. Do they want us to be human shields?”

Earlier this week as the US bombed IS targets, a slight ray of hope spread through the church grounds. Local media reported that the Kurdish forces had retaken Qaraqosh and the Christian towns around it. But the information turned out to be false, dealing yet another blow to an already disillusioned people. Those who attempted to approach the Kurdish front lines leading into Qaraqosh found that there is no fighting in the area, and no ground force attempting to secure their homes.

Tabith added that when IS tried to take the city, the Kurdish forces had tried to hold them back. But in the evening they pulled out without warning, leaving the city to be overrun.

“We left like 100 churches and monasteries — what will happen to them now? Are they going to blow them up?” he said.

Overshadowed by the plight of Iraq’s Yazidis and disillusioned with the Iraqi government, the Kurds and the international community, most of these families have lost hope that they can ever feel safe in Iraq again.

“I went to the US and I was amazed at the rights of all — human rights, animal rights, children’s rights and everything submits to law,” Yousef said.

“For us, we are civilized, polite, peaceful but we are persecuted here. We are subjected to violence. We are tired of repeated migration. We just want to settle. We want stability. If that means leaving then we will all leave.“