It might surprise some people to learn that one-third of the border between the US and Mexico already has a dividing wall. However, it's important to understand that the definition of 'wall' changes based on where you are. In some places, it's a concrete divider or double wall, while in other places it's as simple as a chain link fence topped by a razor wire.

That's one reason it's nearly impossible to come up with a single number for how much it would cost to finish the job. When experts talk about how much it would cost per mile, their estimates range between a few hundred dollars to $21 million. The cost to build on different terrain adds another level of uncertainty.

Overall, the US is likely to pay somewhere between $4 and $8 billion for a wall spanning the entirety of the US-Mexico border. After that, it would cost about $350 million each year to maintain it.

Would it work to keep immigrants out? Well, that's a discussion for another time.

(After immigration and border control took central stage at the CNN debate on Wednesday night, we asked our Jason Margolis for an update on this story he produced earlier on what building a wall between the US and Mexico would mean financially. Here's his earlier report:)

Scott Nicol, a college art teacher and sculptor, likes to bring people to walk the border wall in Hidalgo, Texas. On a windy day, we stroll along a path in the shadow of 18-foot-high iron bars. One of Nicol’s favorite pastimes is hunting for homemade wooden ladders.

“That’s how you get over the wall," says Nicol pointing at some ladders lying on the ground. "I mean that’s what they’re for. It takes $2 or $3 worth of hardware and nails to defeat a wall that cost $12 million a mile,” says Nicol.

That’s $12 million a mile for this section of wall — the average cost per mile across the border is closer to $4.5 million.

President Obama is asking for $3.7 billion to deal with the latest border crisis — tens of thousands of unaccompanied Central American children coming to the US border seeking asylum. House Republicans have countered with an offer of $694 million, with contingencies. The big one is that they want more border security.

That makes Nicol apoplectic. During our 30-minute stroll, we counted the Border Patrol jeeps. We found eight, as well as one ATV and a helicopter overhead. Texas Game Wardens also patrol the Rio Grande in speedboats mounted with machine guns.

“That makes me very nervous,” says Nicol. “There’s absolutely no reason or instance where you would be using that kind of artillery unless there’s a military invasion.”

Yet, more reinforcements are on the way. Texas Governor Rick Perry says he’s sending up to 1,000 National Guard troops to the border soon. Perry says they’re needed to stop drugs and criminals.

Nicol, who also does work with the Sierra Club, says the border wall became his issue for a simple reason: it just makes him angry. To him, it's too costly and divides habitat areas like a wildlife bird sanctuary on the river. He understands the need for border security, but thinks much of the wall's design simply doesn’t make sense. For example, as we’re walking along for nearly a mile, the wall stops.

“Obviously anybody that has traveled up from Central America is not going to be stopped by something that’s only 9/10th of a mile wide. They’ll just go around it,” says Nicol. 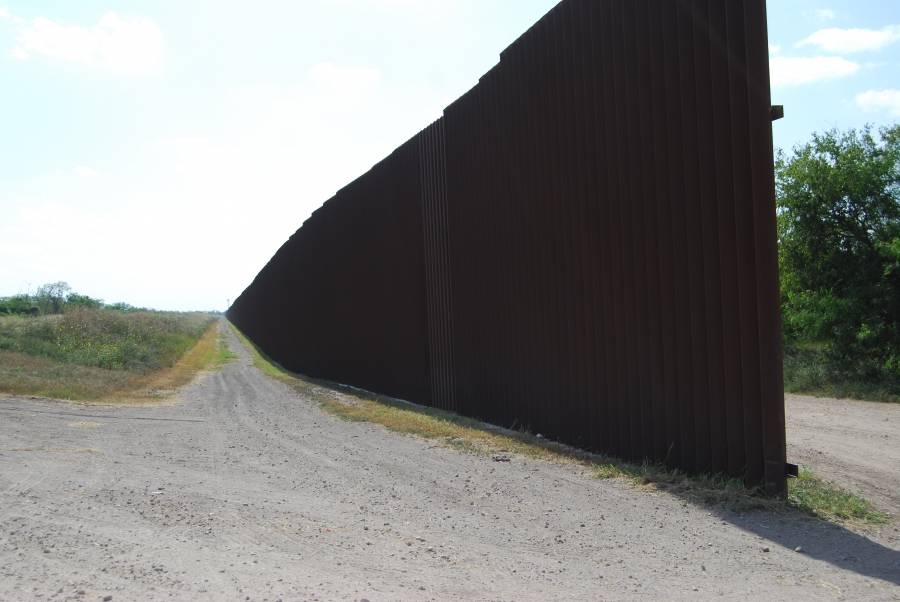 The 18-foot border wall in Hidalgo, Texas, starts and stops, with gaps, along the Rio Grande River.
Credit:

It works this way up and down the Rio Grande — there's the wall, then a gap for a few miles, then more wall.

But the chief patrol agent for the Rio Grande Valley, Kevin Oaks, says the wall isn’t as haphazard as Nicol makes it out to be.

“What it does is it slows the traffic down temporarily, so it gives the agents and whatever technology we employ a little more time to get activated,” says Oaks. The Border Patrol also has unmanned aerial vehicles — drones — that patrol more isolated stretches of the border.

Oaks admits that people can use a ladder to climb over the wall, or even tunnel under. But he says it’s all about striking a balance between what can be funded and what can be achieved.

“If you look at history, there’s no physical way that you can ever possibly, 100 percent secure the border. So you have to come up with a compromise, and that compromise is a low-risk border,” says Oaks. For him, that means safe border communities and a low flow of drugs and criminals coming across.

By many metrics, the investment is paying off — the border is the most secure it’s been in 40 years. The annual tab for immigration and border enforcement nationwide: $18 billion. The budget for just the US Border Patrol alone is closer to $3.5 billion annually.

Community activist Michael Seifert, who lives less than a mile from the border in Brownsville, says there are other costs for border residents, on both sides. Border Patrol agents have killed 19 people, some US citizens, but mostly Mexicans, in a recent two-and-a-half year period.

“And not a single one of those cases has been brought to a fitting conclusion — this is what happened, the agent was justified or not. They’re simply not pursued,” says Seifert.

Kevin Oaks says his agents aren’t acting with impunity. “Every allegation of misconduct is thoroughly investigated and adjudicated appropriately.” 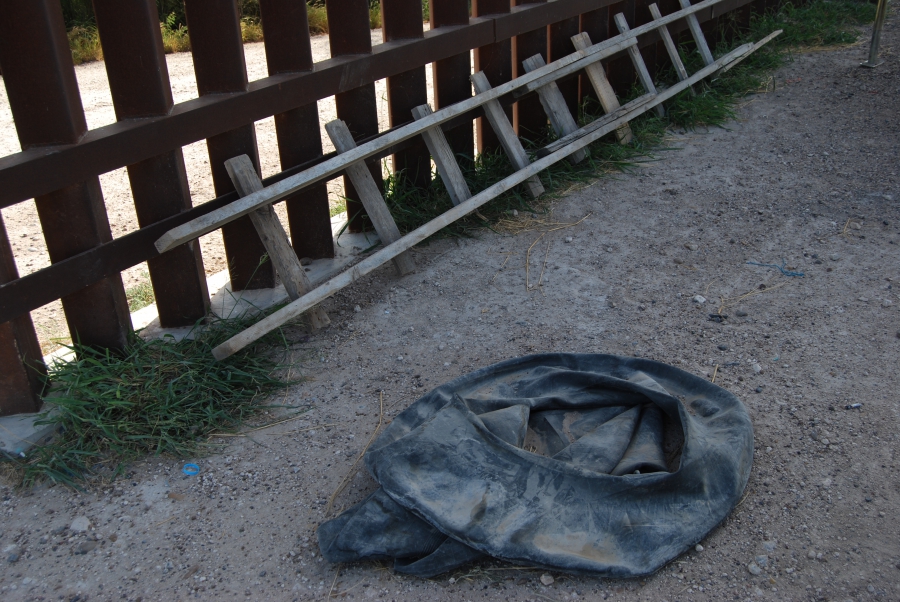 Ladders and a raft, used by migrants to cross the Rio Grande Valley and scale the border wall.
Credit:

Scott Nicol says he's never had a problem with any agents directly and understands the vast majority are trained professionals just doing their jobs. Still, he doesn’t want more agents to deal with this latest border crisis. After all, he says, Central American children are turning themselves in, not sneaking into the US.

“The response from certain politicians is, ‘Send in the National Guard, build more walls,’” says Nicol. “They can’t get their heads around immigration, they can only think about it in terms of security.”

Nicol, as well other border residents, agree more resources are needed to deal with this latest border crisis. But they want money to ease the backlog in immigration courts and provide better services for the children, not to build more security.