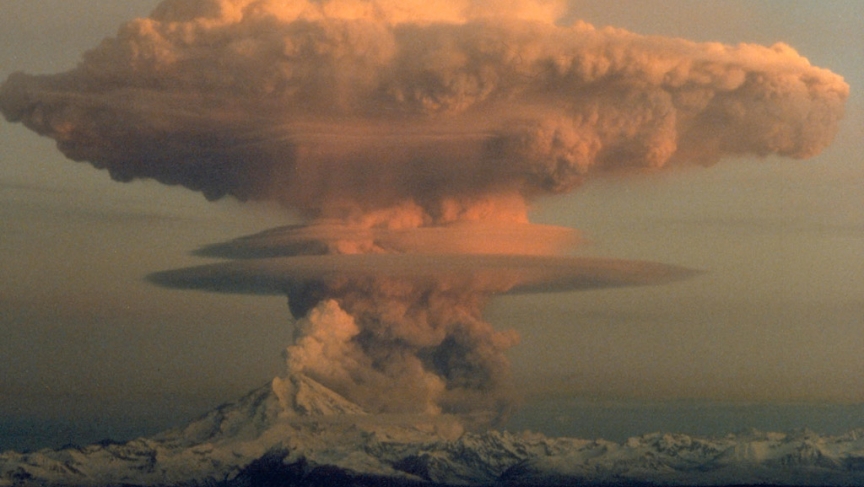 Scientists believe the last mass extinction of species was due to a huge volcanic eruption, much larger than this 1990 eruption of Redoubt Volcano in Alaska. Could humans be causing a new mass extinction?
Credit:

If you take the long view, extinction is just part of nature. But extinction at its current rate is definitely not.

"Geologists in the distant future will be able to see that something very, very unusual happened at the moment that for us is the present," says Elizabeth Kolbert, a writer for the New Yorker. Her new book, The Sixth Extinction: An Unnatural History, chronicles past extinctions and examines the evidence that a mass extinction is happening right now everywhere on Earth.

In an earlier book, Field Notes from a Catastrophe, Kolbert documented how climate change is already having a measurable impact around the world.

“I actually went looking for a follow-up, another book on climate change,” Kolbert says, “and while I was looking, I came to the realization that climate change is just part of an even bigger story — which is [that] people are changing the planet on a very grand geological scale that will be essentially permanent.”

The last big extinction — known as the end-Permian extinction, or the “Great Dying" — happened about 250 million years ago. It wiped out 96 percent of all marine life and 70 percent of all animal and plant species on Earth, according to some estimates.

“Scientists who have studied the event say it came perilously close to wiping out multicellular life altogether and pushing the planet back to the state of having only unicellular life,” Kolbert says. That extinction didn’t happen overnight. The latest hypothesis is that it took about 60,000 years — a relative blink of an eye in geological terms.

It appears that the end-Permian catastrophe was caused by an enormous release of carbon dioxide into the atmosphere from a massive volcanic explosion. The CO2 rapidly warmed the planet and acidified the oceans, making both land and sea uninhabitable for most existing life forms.

“One of the very sobering parallels between what we’re doing [now] and what happened at the end of the Permian period is we are also emitting massive amounts of carbon dioxide into the atmosphere — and doing it very, very quickly,” Kolbert says.

Kolbert traveled with scientists all over the world, from the Arctic to the Great Barrier Reef, and found the same story everywhere. Existing species are going extinct faster than new species are being created, “which means that the variety and diversity of the Earth is shrinking,” she says.

The preponderance of the evidence suggests that human activity, especially the burning of fossil fuels, is driving the acceleration of extinction. For example, humans have raised the acidity of the world’s oceans one-tenth of a percent since the Industrial Revolution. Because the Ph (acidity) scale is logarithmic, that represents a 30 percent increase in acidity.

“If we continue on our present course," she explains, "by the end of the century we will have affected a 0.4 change in the Ph scale. That represents a 150 percent increase in acidity.” Many types of marine life simply can’t survive such a large and rapid change to their ecological environment — just as they didn’t survive the end-Permian event.

The book foresees a rather dire future for the planet, but Kolbert says she “met a lot people who are incredibly dedicated to trying to save what’s left of the natural world, and that is a very hopeful thing.”

“People are really concerned about endangered species,” she says, “but we are very mixed creatures. On the one hand, we do really care about the creatures with whom with we share the planet. And on the other hand, without really intending to, we are very good at changing the world in ways that make it very difficult for them.”

This story is based on an interview from PRI's Living on Earth, the award-winning environmental news show hosted by Steve Curwood.