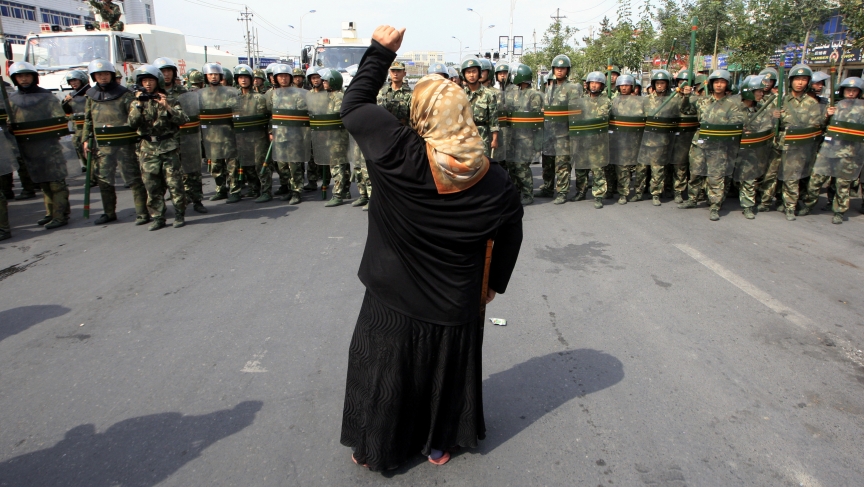 A local woman on a crutch shouts at Chinese paramilitary police as a crowd of angry locals confront security forces on a street in the city of Urumqi in China's Xinjiang Autonomous Region in 2009.
Credit:

The city of Karamay in China's turbulent Xinjiang region is currently hosting the 13th Xinjiang Sports Games. To keep the competition safe from terrorism, the city government announced an unusual safety measure: A ban on “abnormal” Muslim-associated clothing and hairstyles on public transport.

Xinjiang is home to the Uighur people, a Muslim minority that has a tumultuous relationship with Beijing. Uighurs have long accused the Chinese government of trying to stamp out their cultural and religious practices, and Karamay's announcement on August 4 banning so-called “five abnormal appearances," which include headscarves and clothes with Muslim emblems like crescent moons, is just another example, they say. Twitter user @uponsnow shared a copy of the poster that accompanied the news:

The ban is billed as a "temporary measure" for the Xinjiang Sports Games, but Charles Liu from Nanfang.com noted that it will likely become a long-term policy. As early as June 4 this year, authorities in Xinjiang began pressuring the public to stop wearing Muslim outfits because they're “not normal”. Last month, during the Muslim holy month of Ramadan, Xinjiang government even banned its civil servants from the religious practice of fasting.

The region is in the middle of another round of the recurrent and sometimes-deadly clashes between Uighur activists and authorities. The present clampdown came after bloody ethnic unrest broke out in the city of Kashgar on July 28. Thirty-seven civilians were killed, while police gunned down 59 suspected assailants, according to the government's official account.

The news on the ban of the “five abnormal appearances” was highlighted in major news portals and on social media, sparking some extreme reactions. Many Chinese approved of the policy, with some even suggesting that the ban be extended all across the country. "This is the right way," said one Weibo commenter on the page of the Chonqing Morning Post. "Religious practice should be restricted to temples. The public space should be secular." Others demanded that Muslims "become secular" and praised the notion of an "iron fist" in dealing with Uighurs.

But others questioned the effectiveness of the ban. "Sometimes I am also frightened by those Xinjiang people wearing black dresses," said another Weibo user. "But long beards don't mean anything and should not be connected with terrorists. If they are banned from public transport, the more traditional Xinjiangese will be frustrated."

Another commenter reminded people that even an ideologically-approved figure would be hurt by the ban: "Karl Marx also had long beard since he was young…"

Along with the prosecution of moderate, pro-reconciliation Uighur scholar Ilham Tohti, this extreme policy seems likely to further the vicious circle of violent protests and repression. As Henryk Szadziewski, a senior researcher for the Uighur Human Rights Project, told Foreign Policy, “Chinese officials seem to be holding a line that ‘you are either with us or against us', and punishing accordingly."