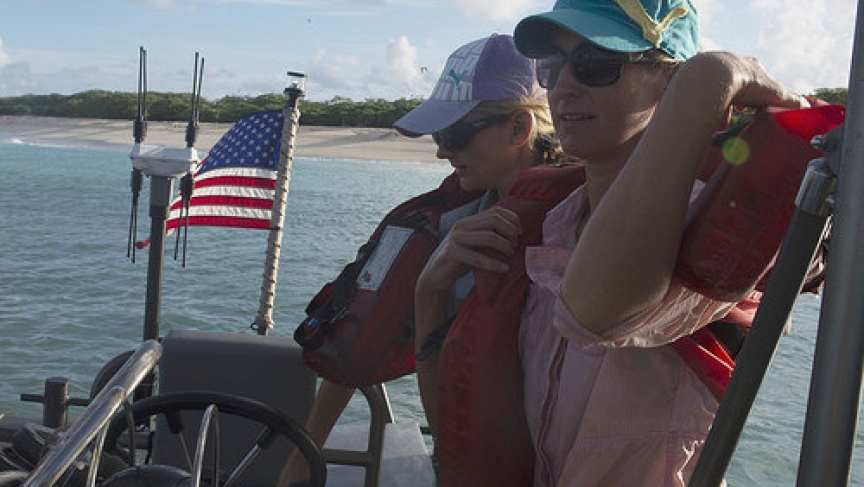 Imagine being on a tiny Pacific island with three tropical storms headed your way. That was the situation for 11 researchers working at the Papahnaumokukea Marine National Monument last week.

The group from the National Oceanic and Atmospheric Administration was assessing the population of Hawaiian monk seals when they learned that Tropical Storm Iselle was bearing down on the islands where they were working.

NOAA requested help from the US Navy to evacuate the team, and three ships — USS Makin Island, USS Comstock and USS San Diego — responded. An airlift wasn't possible because of the sensitive environment, so each deployed rigid hull inflatable boats to pick up the researchers.

"Knowing that this was a marine and bird sanctuary, we wanted to make sure that it was safe for the environment and safe for the pilots as well," says Lt. Michael Smith, the Public Affairs Officer for the Makin Island. "It was challenging waters and knowing that there are reefs and sharks in the water, but the [Navy team] was able to get to the islands safely with no incident whatsoever."

The boats carefully maneuvered along the coastline to get the researchers and their gear on board without affecting the endangered marine life below, and then brought the NOAA team back to the ships.

“We gave them showers, food and some clothing. We gave them a tour of the ship. They were very excited," Smith says. "Once we got them situated, the Marines put them in a V-22 Osprey [tiltrotor aircraft] and we launched them in one of those helicopters over to Midway Island where they actually caught an aircraft and evacuated."

Meanwhile, Tropical Storm Iselle and Hurricane Julio are still wreaking havoc in the Pacific and a third storm system is threatening to develop into an organized storm. On Monday, the crew of a container ship rescued three people who were stranded for 24 hours in a sailboat off the Hawaiian Islands as Julio battered their vessel with giant waves and high winds.