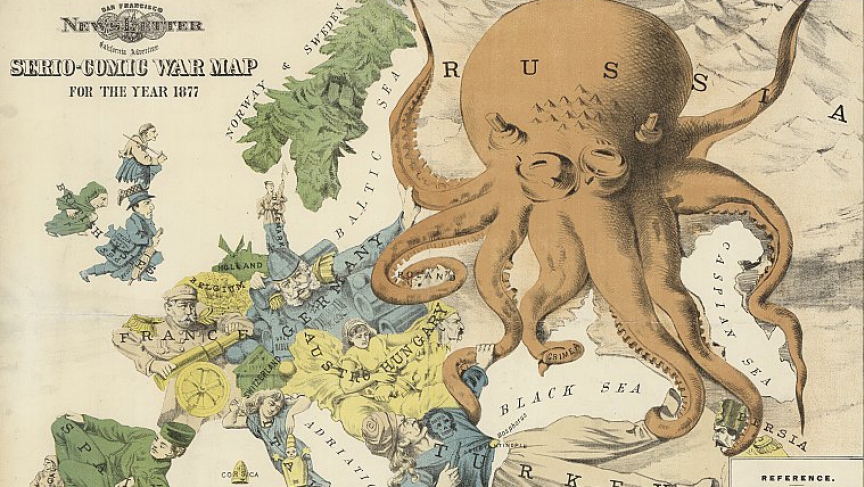 A US cartoon from 1877, showing Russia as an octopus spreading its tentacles over Europe and south-west Asia. In that year, Russia went to war to ‘save’ Orthodox Christian rebels in the Ottoman Empire.
Share

Intense fighting in eastern Ukraine between government forces and pro-Russian rebels has created a real need for humanitarian assistance in the last few weeks. But it has also nearly forced the pro-Russian rebellion to its knees.

That's led many people to conclude that a huge 280-truck convoy currently on its way from Russia to eastern Ukraine is packed with military aid — not the humanitarian supplies Moscow claims. The government in Kiev says an invasion is imminent under the pretext of humanitarian intervention, and NATO agrees.

Until something happens, the world can only take Russia at its word. But it wouldn't be the first time that Moscow has used a noble cause as a pretext for military intervention.

Under the tsars of imperial Russia, Moscow claimed that minorities were being mistreated in the Ottoman Empire. They also claimed the right to intervene to protect Orthodox Christians — and used it frequently.

Russia went to war with Turkey in 1828 to protect Greeks fighting for independence, then again in 1853 to protect Christian holy places in Jerusalem and again in 1877 on behalf of Bulgarians. Each time, the religiously based excuses masked Moscow’s intention to grab territory.

Plenty of countries can be accused of occasional hypocrisy in the search for ways to justify their wars, but with Moscow it seems to be a pattern. Perhaps the most glaring example was in 1939 when the Soviet Union invaded Poland. Stalin had signed a secret pact with Hitler that divided eastern Europe between the two powers. Two weeks after Germany invaded, the Russians moved in to claim their agreed-upon territory.

The public justification, of course, was slightly different: "The Soviet government cannot remain indifferent at a time when brothers of the same blood ... residing on Polish territory, have been abandoned to their fate.” Consequently, in the name of humanitarian intervention, the Red Army was ordered to “cross the border, and take under their protection, the lives and property of the inhabitants.”

In other words, a humanitarian intervention to protect people ethnically related to the peoples of the Soviet Union. In fact, conquest and annexation had been agreed and planned in advance.

The events of 1939 are chillingly documented in a forthcoming book "The Devil's Alliance” by historian, Roger Moorhouse.

Moorhouse writes how “a month after the Red Army’s arrival, the Soviets staged rigged elections (with a closed list of candidates) for new assemblies in the two annexed territories… A week or so later, those new assemblies petitioned the Supreme Soviet in Moscow with a request to join the Soviet Union, which was duly granted.”

Legally, the Soviet Union didn’t really need an excuse to invade Poland. Only after World War II did it become a crime to wage aggressive war.

So when the Cold War required military actions, the Soviet Union appealed to class and socialist solidarity to justify them. In the 1956 invasion of Hungary, the Soviets said they were responding to an appeal from that nation’s true patriots, workers and peasants, against a disintegrating government and the danger of a fascist takeover.

In 1968, the "Brezhnev Doctrine" was defined as the USSR’s right and duty to go to war in foreign countries if and when an existing socialist regime was threatened. It was framed explicitly to retroactively justify the invasion of Czechoslovakia that spring and a host of Cold War interventions in Africa and Asia, leading ultimately to the disastrous invasion of Afghanistan in 1979.

Moscow has not yet invaded Ukraine in the current crisis and says any suggestions that it might are nonsense. That may be so. But today, Putin would need a legal fig leaf to justify it — like a humanitarian crisis.