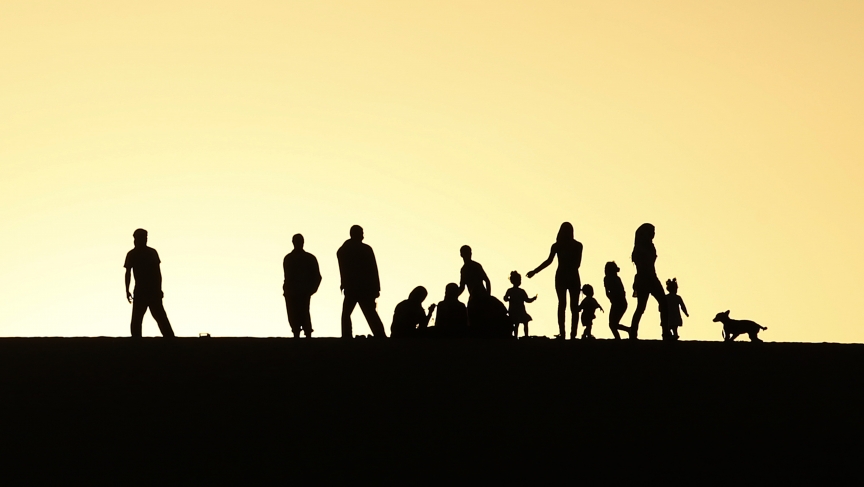 Palestinians walk on sand near the beach in Gaza City May 2, 2014, before the current conflict started.
Credit:

While a cease-fire in Gaza seems to be holding, the violence over the last month will likely have an enduring change to the relationship between Israelis and Palestinians.

Palestinians are angry and sad about the deaths of 1,900 people in Gaza over the last few weeks, and the destruction of some 10,000 homes. Israelis are fed up with a continuous state of uncertainty as rockets are launched over the border into their land.

Still, despite the daily barrage of rockets from Gaza, more than a thousand Jewish immigrants arrived in Israel in the 10 days after the Gaza war began. Many thousands more have emigrated over the past few years.

Some are fleeing anti-Semitism in their home countries, while others want to start a new life in a new land. Katie Connell is one of the latter. She left Louisiana for Israel on July 3, 2013, and currently lives in an immigrant absorption center in Beersheva, in the Negev desert. Her apartment building includes Jewish refugees from Yemen, Tunisia and Cuba; she is the only American.

She's been affected by the current operation in Gaza.

"This was the first time that I've been in Israel during war," she says. "I definitely expected it, and I knew it was going to become a part of my life. But being in Beersheva I've heard the war. I can hear artillery and I can hear machine guns. I can hear the war. Of course I've been sffected by rockets. About two weeks ago, many times a day, there were air raid sirens."

Connell says that simple day-to-day tasks, like drinking a morning cup of coffee on her balcony, have been changed by the war.

"I'm hearing the sounds of death, of war, 25 miles away from me," she says. "However, the state of Israel has a right to defend itself. There is no excuse for a terrorist organization shooting rockets into civilian areas and to expect Israel not to retaliate."

At 32-years-old, Connell says she will not be joining the military, but would consider it an option if she were younger. Connell says she is adjusting to life in Israel, which is much different from the United States.

"Most of the people that live in my building are refugees," she says. "They are rescued from countries such as Yemen and Tunisia, where they were being persecuted for being Jewish. What's sad is a lot of them have gone through horrible, horrible atrocities in their lives — having husbands murdered for being Jewish or having their daughters kidnapped and sold as wives. And they come here, where they're supposed to be safe, and they're running from rockets"

While Connell has decided to move to Israel, Arab-Israeli writer Sayed Kashua made the decision to leave.

Kashua was something of an anomaly in Israel. As a kid, he was the only Arab student at his Jewish boarding school. For years, he's been one of Israel's most prolific Hebrew writers. And when he moved his family to West Jerusalem, they were the only Arabs in the neighborhood.

Kashua's outsider position has allowed the author and journalist to be a force for peace and hope. During his career, he's tried to bridge the cultural divide between the two sides. He's one of Israel's favorite comedians and authors, and his novels and newspaper column, written for Israeli-Jews, capture the struggles of being an Arab in a Jewish state.

But the recent violence has become too much for Kashua and his family. A few weeks ago, he, his wife, and their three children packed up a few belongings and bought one-way tickets to the United States, leaving everything else behind.

"Because of the situation, because of the racism, and because of the hatred — and we did live in a Jewish, nice neighborhood in western Jerusalem — I couldn't really stay any longer," Kashua says. "It was just the feeling in the streets of Jerusalem, when young Israelis that belonged to the right wing or the extreme right wing, were just beating Arabs only because they were Arabs in the streets of Jerusalem. I was very much worried about my children. I think that was the first time I lost hope."

Though Kashua was a long-time columnist in Israel, writing in Hebrew, he says he always felt that he had to be mindful of his opinions.

"I always felt that I had to be careful — much more careful than left wing or extreme left wing Israeli journalists," he says. "If you are Jewish, your opinion is legitimate and you are part of the inner discussion. If you're a Palestinian or an Arab, you will always, most of the time, you will be considered a fifth column. I really always had to be careful."

Kashua says that tensions have risen, adding that dissenting Israelis are even persecuted, which made it much more difficult and dangerous for his family to remain in Israel.

"I read about colleagues in the Haaretz newspaper that were almost lynched about their writings against the war," he says. "It's something new, and unfortunately the extreme right in Israel want that war."

Kashua says that his writings in Haaretz have lead to threats — that his children would be kidnapped or that someone would break his legs.

"It was too much," he says. "It's this very awful feeling that as soon as there is a war going on or a conflict, you become an enemy. Everything that I was trying to fight against — not to separate people because of their nationality or religion — I don't want to live like that. I really believe that we have to live together, to share that land together. Maybe I was naive and made a huge mistake. But I felt like there was no room for me any longer in my neighborhood."

Though Kashua tried to make life in Jerusalem work, he says he could no longer live in Israeli society.

"I wrote to my readers that I can no longer afford to tell lies to my kids — as if they can be one day equal in the state of Israel as someone who is not born to a Jewish mother can really be accepted in a Jewish state," he says. "It's really very sad. I do have wonderful neighbors — I don't want you to think I have problems with my colleagues at work or with my neighbors — it's just something bigger."