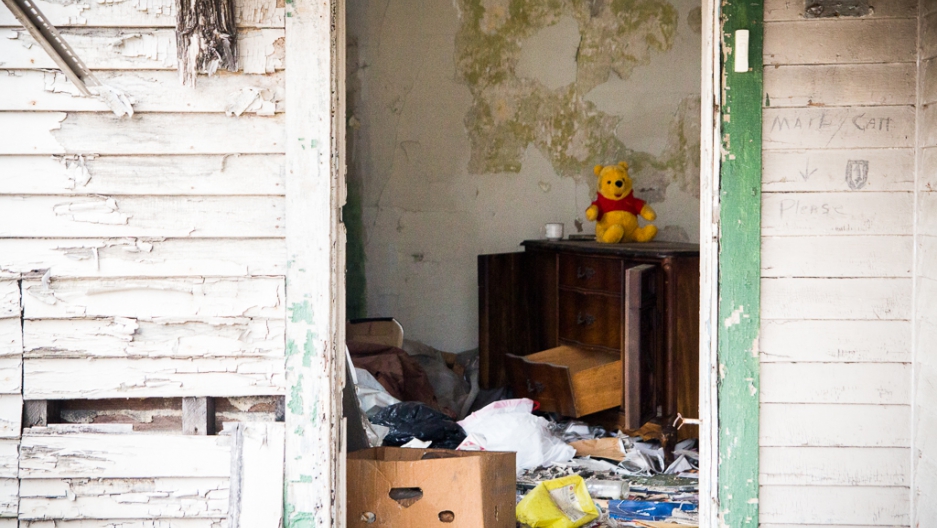 A teddy bear greets the curious inside an abandoned house in Youngstown, Ohio. A former industrial hub, Youngstown, OH is now a shadow of its former self. The young people who stay often have a hard time finding employment.
Credit: Saila Huusko
Share

Editor’s note: This story is part of a Special Report on the global youth unemployment crisis, “Generation TBD.” It's the result of a GroundTruth reporting fellowship featuring 21 correspondents reporting in 11 countries, part of a year-long effort that brings together media, technology, education and humanitarian partners for an authoritative exploration of the problem and possible solutions. Fellows Saila Huusko and Eleanor Stanford traveled to the Rust Belt cities of Youngstown, Ohio; Buffalo, New York; and Gary, Indiana.

YOUNGSTOWN, Ohio — Ken Bowman joins the line for a free lunch in the Youngstown Salvation Army canteen, just like he does every Friday.

Looking younger than his 21 years, his hair dyed jet black and wearing big, battered boots, Bowman plays heavy metal on his cell phone. He chooses a seat at the end of a table and sits hunched over his tray, his blue eyes furtively sweeping the room. The others sit in packs, regulars who’ve formed lunchtime friendships over their burnt coffee and peppered corn, discussing the jobs they once had and the government benefits they no longer get.

Bowman is sensitive to the stigma of accepting handouts like lunch. “[It] doesn’t mean you’re homeless or poor, people have standards but they struggle,” he said, his chin jutting out, his eyes glowering.

After paying his rent, Bowman says his job in a guitar shop leaves him with $50 a month to live on — if he can get shifts. He is one of America’s “underemployed,” a group of as many as 11 million Americans struggling to survive in society’s shadows on wages that put them below the federal poverty line.

As a young man in Youngstown, Ohio, Bowman counts himself lucky to have a job at all. Across the Great Lakes region of America, from upstate New York to Ohio to Indiana, the factories which once shaped young men’s lives and the nuclear families they created have been closed for decades. And now a new generation of young people is struggling to build lives from the ashes of industrial America.

“I see people out here every day, young guys and girls, trying to get a job and they don’t. They get declined, denied, denied, denied,” Bowman says, back in his noticeably empty apartment. Music T-shirts and posters are the only personal touches in the living room, whose wall color Bowman didn’t choose. In the dark kitchen sits an enormous sack of potatoes for when Bowman can’t make it to the Salvation Army.

More than half of Youngstown residents have left in the last 40 years, 50,000 of them fleeing between 2010 and 2012. Similar exoduses have plagued other Rust Belt cities in recent decades, creating a new generation of American “ghost towns.” Bowman would leave too if it weren’t for his mother, who he says is nevertheless too dysfunctional to live with.

Fifty years ago, young men in places like Youngstown worked in factories of heavy industry. Youngstown was named for John Young, who established the town’s first mills. Gary, Indiana, a quintessential factory town, was founded by Elbert Henry Gary, the first chairman of the United States Steel Corporation. Buffalo, New York, started as a small trading outpost and grew to become a railroad hub and prosperous center of steel production before a dramatic decline that paralleled Youngstown’s.

"All cities have their moment. And the moment very often is over in a blink of an eye,” explains Buffalo-based Preservationist Tim Tielman.

Many say that blink of an eye for Youngstown was the loss of 50,000 steel industry jobs at Youngstown Sheet & Tube in 1977, known here as “Black Monday.” The closure of the factories has left a gaping economic hole that part-time, low-wage work like Bowman’s job in the guitar shop can never fill.

Now, cities like Youngstown and Buffalo are often defined by grim statistics, though a movement to create another “manufacturing revolution” has emerged in the last several years. Youngstown’s loss of 60 percent of its population since the 1970s makes it America’s fastest-shrinking city; the lowest average income of any town with more than 65,000 residents; with an unemployment rate that shot up at a 90-degree angle in 2009, then fell steadily as residents left.

The interior of one of many vacant homes in #Youngstown. These owners are apparently in California #GenTBD pic.twitter.com/jBUhL1Z74n

In a 2009 essay called ‘The Social Costs of Deindustrialization’ economists John Russo and Sherry Lee Linkon describe Youngstown as “the poster child for deindustrialization,” describing how “unemployment brings reduced standards of living and a variety of social disruptions not only for displaced workers and their families but also their communities and states.”

The ripple effect of events like Black Monday look like this: Local businesses lost customers as unemployed workers cut back on buying. Houses abandoned by workers heading south to find work became centers of blight. The town’s political sway diminished. Just as once all life flowed from the steel mills, then social urban decay flowed from the buildings’ empty husks.

The decay is there in Bowman’s difficulty finding employment, in the crime-ridden parts of the city he won’t visit, in his confusion over his future, and in Youngstown’s “terrible” public transport, which he deals every day with these ever-widening ripples. Bowman spent a brief time in jail and now talks of horror about the idea of ending up in prison. He shakes his head: anything would be better than that. After dropping out of high school he completed an online GED program, but he isn’t sure what good it’s done him.

Bowman is wary about making friends, a confessed loner who has grown up suspicious of people’s motives, including those of the government. He says that being on his own makes him attractive to girls his own age. But none of the relationships stick. He doesn’t talk about his father.

Youngstown has one of the highest homicide rates in the country and violence is part of the landscape. Joselyn Parker, Youth and Teen Director at the Youngstown YMCA speaks with tears in her eyes of the number of her kids who have been fatally shot.

The Youngstown Neighborhood Development Corporation works to develop grassroots neighborhood regeneration even further. Executive Director Presley Gillespie explains their goal is to create a culture in Youngstown “where people choose to live, not just have to live.”

They also tear down vacant houses, repurpose vacant lots into urban farms, design access to fresh food, and employ a few dozen young people from at-risk communities over the summer.

“Dealing with the challenges one day, one block, one house and one neighborhood at a time,” explains Gillespie. “That’s the way we think we’re going to solve our problems.”

At the municipal level, slow gain is the most generous assessment of initiatives’ progress. Conversations at Youngstown City Hall often turn to poorly executed building demolitions around town.

The Youngstown 2010 Citywide Plan was supposed to be a blueprint for post-industrial revitalization, but was largely abandoned.

Between 2005 and 2010 Youngstown spent over $1 million on studies to improve the city, but most of the studies' recommendations were never carried out. Residents mutter about tax dollars for big business and white-collar corruption.

Perhaps because of its role as poster child for the pitfalls of the modern American economy, President Obama cited Youngstown and its Ohio's National Additive Manufacturing Innovation Institute in his 2013 State of the Union Address (and then again in 2014), part of a plan to create innovative manufacturing hubs across the country “where businesses will partner with the Department of Defense and Energy to turn regions left behind by globalization into global centers of high-tech jobs.”

Since rebranded as America Makes, the institute focuses on developing a network to advance the capabilities of 3D printing in the US. It operates out of a modern-looking office in a historic building near Youngstown State University.

In Youngstown, opinions vary on the conventional jobs available to at-risk (rather than college-educated) young people.

Dr. Laura Meeks, president of Eastern Gateway Community College in Youngstown, sees her goal as getting her students into training programs and then vocational jobs, where she says young people can earn good salaries as welders, pipe layers and as truck drivers. Knowing a trade as a route to stable employment as opposed to the often-criticized “disposable” attitude of service industry work.

Economists Russo and Linkon see the pressures of globalization creating this vulnerable young demographic across industries and across America.

“[W]e see the whole country experiencing the kinds of struggles that places like Youngstown and its sister cities around the nation know all too well. Thousands of American communities are facing economic hardships that could last a generation or more.”

The 20th century employment model based upon domestic production of goods no longer exists in the Rust Belt. And as globalization and the service sector surge forward, the experiences of 21-year-old Bowman will be shared by millions more young people in the US and across the globe.

Bowman says his dream job is to be a truck driver. Traveling back and forth across the country, just him and the open road a long way from Youngstown, Ohio.

“Yeah, that would be sweet,” he says, a grin spreading across his face.