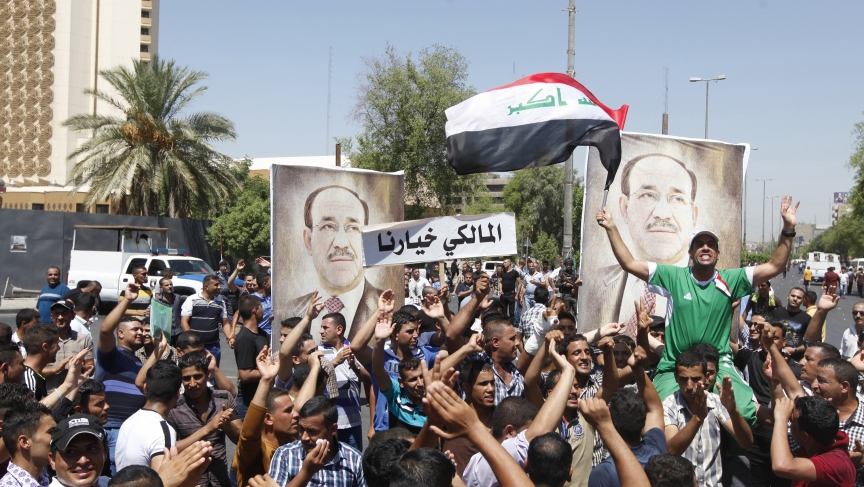 People with portraits of Iraqi Prime Minister Nouri al-Maliki rally in support of him in Baghdad on August 11, 2014.
Credit:

It wasn't supposed to end this way: When the US left Iraq, the idea was that Iraqis would elect their own leaders and create a stable, democratic country. But over the past few months, that dream unravelled in dramatic fashion. Much of the blame fell on the dysfunctional government of Iraqi Prime Minister Nouri al-Maliki.

Maliki has been criticized as tyrannical and deeply sectarian, and even many members of his own party have abandoned him in favor of Haider al-Abadi, the Iraqi's president's nominee to become the new prime minister.

His defiance, says Jane Arraf of Al Jazeera America, has made it harder to fend off ISIS in northern Iraq. "One of the effects on the ground has been that, because of the bitterness between the Kurdish Regional Government and Prime Minister Maliki's government, there hasn't been money flowing to the Kurdish forces here," she explains. "The Kurdish peshmerga have not been paid. Public servants haven't been paid. There really hasn't been a lot of coordination. There hasn't been a lot of talk."

The peshmerga militias have been fighting ISIS in lieu of the Iraqi army, which collapsed in northern Iraq in the face of ISIS' June invasion. Now, with ISIS making dangerous gains over the past few days, Maliki's neglect has faded. Last week, he ordered the Iraqi Air Force to directly support Kurdish fighters for the first time.

But, Arraf says, the peshmerga "feel that they would have done better had they had more support from Baghdad."

An even larger problem could erupt if Maliki and Abadi can't solve their struggle over the prime minister's seat, which is distracting from the war in the north. "ISIS is definitely slipping in between those cracks," Arraf says. "We saw that with car bombings today in Baghdad."

US officials are worried that Iraq could become easy prey for ISIS. The Obama administration has started supplying weapons to the Kurdish forces directly and launching some airstrikes in support of the peshmerga, though the strikes are ostensibly to protect American advisors in the city of Erbil.

But even if increased support from Washington and Baghdad succeeds in driving ISIS back, Arraf says many Iraqi minorities have lost faith in their country: "What's different about this conflict is that Christians, Yazidis who've been displaced from their homes ... say they will never feel safe again."