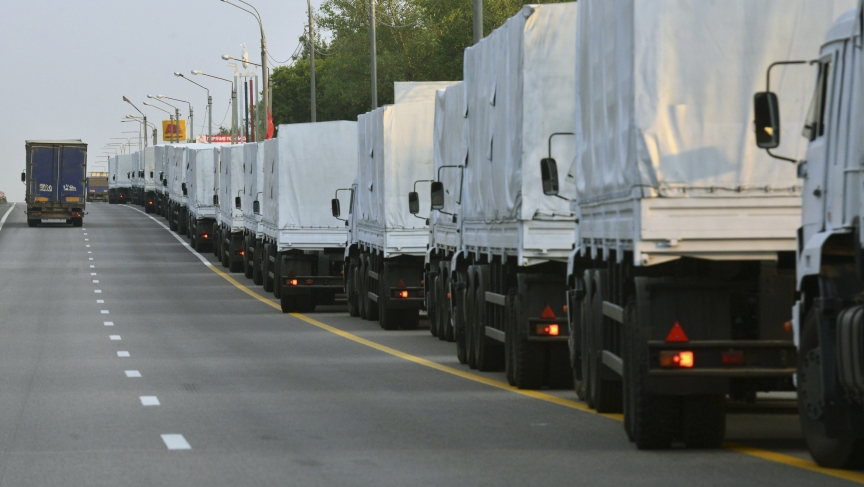 A Russian convoy of trucks carrying humanitarian aid for Ukraine stops along a road in the city of Voronezh August 12, 2014. The convoy carrying tons of humanitarian aid left on Tuesday for eastern Ukraine, where government forces are closing in on pro-Russian rebels, but Kiev said it would not allow the vehicles to cross onto its territory.
Credit:

Is a Trojan horse headed for eastern Ukraine?

That's what many Ukrainians fear after hearing news that a huge convoy of Russian military trucks — 280 in all — is headed toward the border. Russia says the trucks are packed with humanitarian aid, but Kiev says they'll only be allowed in after the International Committee of the Red Cross confirms what they're carrying.

In Kiev, BuzzFeed's Max Seddon has been monitoring the convoy's progress. He says it left Moscow this morning without that official go-ahead from the ICRC. “It’s very confusing at the moment,” Seddon says.

What makes the convoy unique is that Russia already seems to have little problem getting things across the border into Ukraine, so it's not clear why a special convoy would be needed. “If you believe Ukrainian and Western intelligence, Russia has been sending everything, including anti-aircraft missiles, tanks and mercenaries and everything under the sun over this porous border with Ukraine,” Seddon says.

That’s why many people fear this could be some sort of Trojan horse, perhaps filled with the same kind of mysterious uniformed men who suddenly appeared in Crimea just before Russia annexed it. Ukraine says it wouldn't be surprised, but it’s hard to know what it could do if Russia did decide to invade. “Kiev just doesn’t have the capabilities to deal with a full-scale invasion,” Seddon says.

The widespread suspicion of Russia is an ironic outcome of the crisis, which began with Russia attempting to drive the Ukraine away from the European Union and closer to Moscow. That obviously hasn't happened. “The majority of Ukrainians are united in this traditionally divided country  — for the Ukrainian state and against Russia and against Putin personally,” Seddon says.

The conflict is now closer to open war than ever before, Seddon thinks. It's been a rapid progression: Turbulent protests in Kiev right after the Sochi Olympics that morphed into a revolution; the annexation of Crimea; threats in eastern Ukraine followed by the downing of a passenger jet. It’s been sad, dramatic and seemingly neverending. So does anything about the story surprise Seddon anymore?

“Nothing," he says. "I think six months ago when I was sitting around in Kiev watching figure skating every night — if you told me I was going to spend the next six months doing what I have been doing, I would not have believed you. But at this stage I think really anything goes.”