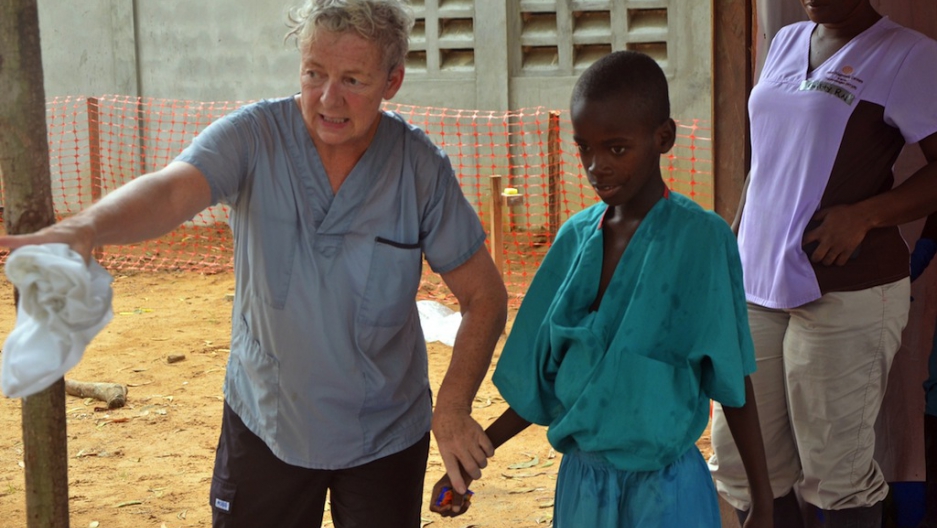 A 10-year-old boy walks with a doctor from Christian charity Samaritan's Purse, after being taken out of quarantine and receiving treatment following his mother's death caused by the ebola virus, in the group's Ebola treatment center, at the ELWA hospital in the Liberian capital Monrovia, on July 24, 2014.
Credit: Zoom Dosso
Share

WASHINGTON — A Congressional hearing on the Ebola outbreak Thursday brought sharply into focus the delay in international response to the crisis that has now claimed over 900 lives in West Africa.

This gathering, convened by the House Foreign Affairs Subcommittee on Africa, Global Human Rights, and International Organizations, heard testimony from doctors and human rights workers who have been engaged on the front lines of this outbreak. While consensus clearly emerged that Ebola was not yet a “significant danger” to the United States, some participants suggested that aid to the crisis has been too little, too late.

“Both the international community and the Obama administration underestimated the extent of the disease,” said Republican Congressman Frank Wolf, who had been invited to the hearing. “Little action was taken to come in front of the problem despite warnings from non-profits working on the ground.”

Meanwhile the World Health Organization (WHO) on Friday called the Ebola outbreak in West Africa an “extraordinary event” and declared it a “public health emergency of international concern.” The international body, in its first emergency committee meeting on the outbreak, emphasized that the possible consequences of further international spread were particularly serious.

The three countries affected dealing with the outbreak the past few months are among the 83 countries worldwide that have the lowest ratio of doctors, nurses, and midwives, said WHO’s 2013 report.

Representatives of relief agencies at the hearing decried the slow response of the US government.

“The Ebola crisis we are now facing is not a surprise to us,” said Ken Isaacs, Vice President of International Programs and Government Relations at Samaritan’s Purse, an international aid organization. “But it took two Americans getting the disease in order for the international community and United States to take serious notice of the largest outbreak of the disease in history.”

“That the world would allow two relief agencies to shoulder this burden along with the overwhelmed Ministries of Health in these countries testifies to the lack of serious attention the epidemic was given,” he said.

Another witness, Dr. Frank Glover, described how Liberia had less than 200 doctors serving four million people before the epidemic.

“After the outbreak that number went down to about 50 doctors involved in clinical care,” he told the committee.

Most of the expatriate doctors left, and nurses went on strike as they had not been paid in six months, and lack of protective gear resulted in several deaths of these nurses. Government hospitals closed after a couple of doctors died of the disease, Glover said, adding that it took 30 hours to just get a sample tested in Liberia.

“Most patients are dying with Ebola in their communities because there is simply no where to go,” he said. “Many dead bodies lie in the streets for days as the Ministry of Health does not have the capacity to dispose of all of the bodies in a timely manner.”

Even though there is a strong possibility that if US citizens in these countries contract Ebola, they will have to be evacuated, Isaac said that there was only one plane in the world that could safely transport them, as he discovered when two of his team members fell sick with the disease. If this is true, the US does not have the capacity to evacuate multiple citizens at a time.

US and international response

The WHO has launched a $100 million emergency response plan to combat the crisis. The international health body also opened a sub-regional coordination center in Conakry last month, from where they’ll be coordinating all relief efforts.

Meanwhile the US Agency for International Development (USAID) has committed $14.55 million since March 2014 towards Ebola response. The organization has also organized a Disaster Assistance Response Team (DART) in Monrovia, Liberia, Conarky and Guinea to coordinate the response efforts.

Earlier this week, USAID also announced an additional $12.45 million to support the Centers for Disease Control and Prevention (CDC), WHO, and non-profits working to counter the Ebola outbreak. “Specifically, this funding will go toward the expansion of Ebola outbreak programs in the affected countries,” testified Dr. Ariel Pablos-Mendez, Assistant Administrator for Global Health in USAID.

The CDC will initially send 50 disease control experts in 30 days to the affected areas and work with the local governments and other relief agencies, Dr. Tom Frieden, Director of CDC told the committee.

Despite these response mechanisms in place, this Ebola outbreak will “easily and quickly surpass the combined total of all previous outbreaks,” said Isaacs. “The disease is uncontained and out of control in West Africa.”

Though WHO currently reports 1,711 Ebola cases and 932 deaths in West Africa, Isaac said that the reported numbers only showed 25-50 percent of the actual number of cases.

“It’s like fighting a forest fire: leave behind one burning ember, one case undetected, and the epidemic could re-ignite,” said Dr. Frieden. “Ending this outbreak will take time, at least three to six months in a best case scenario, but this is very far from a best case scenario.”

More from GlobalPost: How the Ebola outbreak turned into a racism and responsibility debate