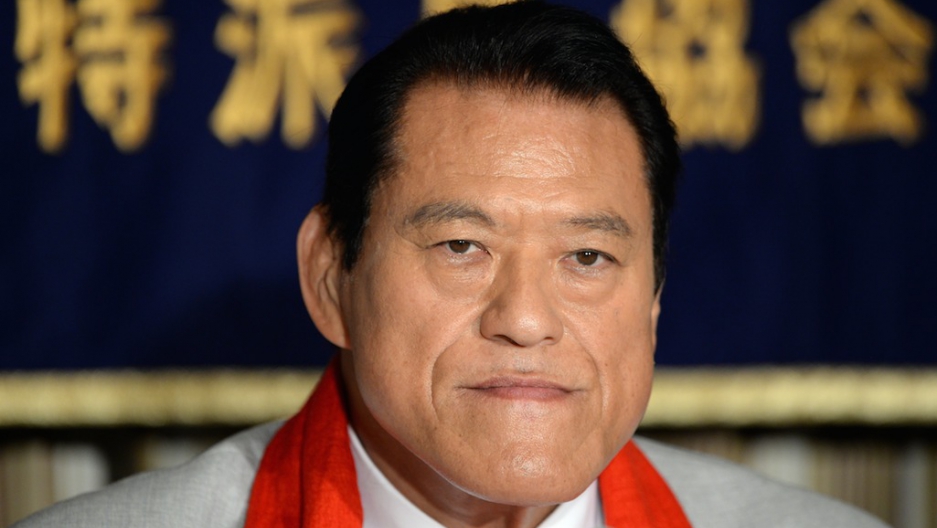 SEOUL, South Korea — The muscular and imposing Antonio Inoki stands among Japan’s most revered former wrestlers, a WWE hall of famer who has settled into retirement as a member of the Japanese parliament.

The athlete, 71, has a colorful reputation in his homeland. He greets state dignitaries, fellow athletes, and even the occasional child with his trademark "Antonio Inoki slap" — literally a smack across the face, believed to transfer his warrior spirit to the receiver.

Check out the lineup of accolytes taking it across the cheek in the video below:

Ringside enthusiasts know the Japanese legend for his unusual “boxer vs. wrestler” battle against Mohammad Ali in 1976. Inoki spent a few rounds awkwardly lunging toward Ali and tumbling onto his back, trying to kick the American boxer’s feet from his position on the floor.

It was a precursor to the style we know today as mixed martial arts.

But aside from his flamboyant career, Inoki has a lifelong connection to the Korean peninsula, making more than a dozen visits to the North Korean capital of Pyongyang. Influencing him was a renowned teacher, the preeminent and deceased wrestler Rikidozan, who lived in Japan but was born in what is today North Korea.

On Aug. 30 and 31, Inoki will build on that link, doing something totally badass that could rival Dennis Rodman’s “basketball diplomacy.” He’ll bring a roster of world-class combatants from the US, Europe, Japan and China to Pyongyang, where he’ll lead a massive pro-wrestling show.

The event is reportedly an attempt to recreate an earlier extravaganza, “Collision in Korea” — a series of fighting mash-ups in Pyongyang in 1995 that attracted 320,000 spectators, and included Inoki as a key combatant.

Should we expect Rodman-esque antics, with the politician appearing out of place with an ostentatious clique of athletes, sporting nose rings, dyed hair, and an incoherent tangle of words?

Inoki, a statesman, has a reputation for taking on heroic tasks for his country, making him more akin to Mr. T or Chuck Norris. In 1990, the Muslim convert bravely secured the release of Japanese hostages from Saddam Hussein’s Iraq — although, despite his calling card, there's no evidence he attempted to slap the Iraqi dictator across the face.

Still, not all of Inoki’s activities in North Korea have been welcomed with open arms. In November 2013, a gang of infuriated colleagues suspended the lawmaker from the Japanese Upper House for 30 days, upset over his unauthorized meetings with senior regime officials earlier that month.

Relations between North Korea and Japan can be perilous, and it’s rare for Japanese citizens to travel in Pyongyang.

The garrison state has long fumed over Japan’s economic sanctions and its brutal history of colonialism over the Korean peninsula. Japan, on the other hand, slings vitriol at its neighbor thanks to state-sanctioned kidnappings of its citizens in the 1970s and 1980s, and its nuclear program.

But ever since a series of talks that began in May, the two countries have struck a deal, with Tokyo agreeing to relax sanctions and lift an embargo on North Korean ships in Japanese ports in exchange for a North Korean inquiry into the abductions decades ago.

Could the arrival of a self-appointed Japanese sports ambassador contribute to a diplomatic thaw?

Possibly, because Inoki’s coming will probably be one of multiple Japanese exchanges sought by North Korea in the near future, part of a drive to improve relations with its island neighbor, said Andrei Lankov, a North Korea expert at Kookmin University in Seoul.

“North Korea has become too dependent on China for aid and investments and is seeking better relations with Japan and Russia,” he said. He believes that Pyongyang will seize on a diplomatic warming to seek reparations from Tokyo for its history of war crimes, similar to an $800 million package that South Korea received in 1965 and which boosted the then-impoverished country in its quest for rapid economic growth.

“Everything in North Korea is political,” including decisions to host cultural exchanges such as the Inoki visit, he added.

But Michael Spavor, the Canadian consultant who is authorized to bring foreign tourists to the wrestling festivities (and who arranged Dennis Rodman’s trips), would prefer to keep politics out of martial arts. “We need to see these as exchanges between two nations that are peaceful and non-political,” he said. “There shouldn’t be some other motive.”

More intriguingly, will Inoki indulge in his noble tradition of slapping his fans so hard that they see stars?

And if that’s the case, will he slap Kim Jong Un? Will Inoki even meet the North Korean generalissimo or other government chiefs?

Spavor declined to comment, saying that he’s not sure whether the Marshal would attend.

Spavor also wondered how North Koreans would interpret Inoki’s slapping rite of passage, should he choose to whack a few heads. “The DPRK [North] Koreans, like all of us, could think it’s pretty strange,” he said.