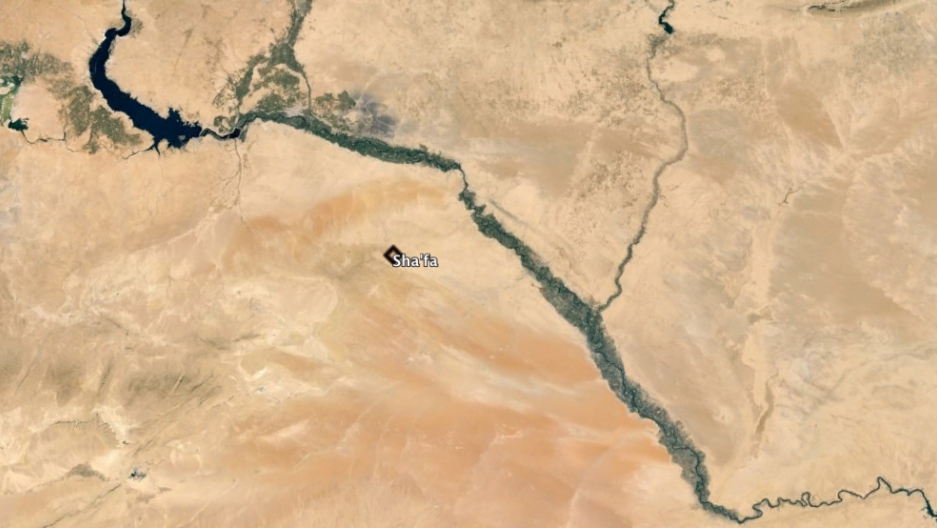 BEIRUT, Lebanon — As the extremist group known as the Islamic State (IS) consolidates its astonishing advances through Iraq and Syria, a tribe in Syria’s eastern Deir al-Zor province is leading an armed insurrection against the group.

Their rebellion appeared to be all but crushed when pictures surfaced last week showing the heads of the decapitated instigators, but over a week later the unrest that began in a handful of towns has spread through the key oil region, threatening a valuable chunk of the self-declared caliphate.

IS has controlled most of the province since July, following a months-long offensive to force out the Nusra Front, Al Qaeda’s affiliate in Syria and an IS rival, after IS itself broke off from Al Qaeda earlier this year.

The territory it captured included the heartland of the 83,000-strong Shaitat tribe: the towns of Abu Hamam, Al-Kishkieh and Graniej. In exchange for peace, the tribe’s leaders agreed not to take up arms against IS, but that truce was shattered on July 30 when the jihadists arrested three Shaitat members in Kishkieh, allegedly for refusing to collect money to support the caliphate. Haian Dukhan, a doctoral student at the University of St. Andrews researching tribes in contemporary Syria, said the arrests violated fundamental tribal conventions, sparking the revolt. “It’s part of the clan traditions — taking revenge on those who would do harm to any of their members,” he said.

At least nine IS fighters were killed in the surprise rout, according to the Syrian Observatory for Human Rights, an anti-government monitoring group. Word quickly spread as videos emerged showing tribesmen riding motorbikes through the streets in celebration, with captured IS fighters in tow, and decrying the group’s leader, Abu Bakr al-Baghdadi. The IS response was swift and brutal. It declared the tribal towns a “military zone,” and returned with reinforcements to round up and behead the men it claimed were responsible. Pictures later surfaced showing many bodies on crosses in a public square. One IS fighter wrote on Twitter: “We are not afraid to slaughter all of deir [al-Zor] and turn its ground red if required.”

Despite the threat, initial protests by tribesmen in the city of Al-Bukamal, 50 kilometers to the south, quickly escalated into a car bombing on an IS base there, killing several more of the group’s fighters, the Observatory said. IS also came under attack in the cities of Al-Ashara and Mayadin, to the north, and in the towns of Abu Hrdob, Jerza and Swaidan Jazira, as the clashes fanned out from urban areas along the Euphrates River and toward the surrounding desert oil fields.

As of Monday, IS had retaken the three towns in which the rebellion started, killing many along the way, but pockets of resistance remain. Many of the tribesmen have fled to the nearby town of Sha’fa, where they remain in hiding. IS is demanding that residents of the town, who Sunday held a protest demanding its withdrawal from the area, hand over the fugitives — with the shadow of its recent summary executions hanging over the implicit ultimatum.

One tribal leader told Dukhan that his men have the will to fight IS but lack the resources. Heavy losses have indeed been reported. But Anmar Turkmani, a spokesman for the opposition Free Syrian Army (FSA), told GlobalPost that his units are now actively helping the tribe to expand its uprising, which could help turn the tide. He claimed the FSA had recently provided the Shaitat with men and heavy machine guns, as well as rocket launchers. Shaitat members have also circulated pictures on social media purporting to show heavy weapons and Grad rockets en route to be used against IS. Turkmani said Monday that despite IS gains in the past 24 hours and the cornering of tribesman in Sha’fa, fighting was continuing in the surrounding desert.

The fledgling Islamic State needs tribes’ support, or at least acceptance, not least because these Bedouin communities constitute up to 15 percent of Syria’s population. In its prior incarnation as Al Qaeda in Iraq, the group’s gains were thwarted by a tribal “awakening” that accompanied the US-led “surge” in 2007, sparked by native resentment of the extremists' occupation of tribal lands and the iron fist with which they ruled them. IS has tried to avoid repeating those mistakes in Syria and Iraq today, obtaining (by force if necessary) pledges of allegiance from clan leaders in exchange for promises of security and social services. In Raqqa, the caliphate’s de facto capital, IS has been marrying its fighters into tribal networks in an apparent bid to boost its legitimacy.

But such attempts to woo support are accompanied by the harsh reality of life under the extreme IS interpretation of Islam. Dukhan said this would be particularly difficult for the clans of Deir al-Zor to accept. “Tribes tend to be less religious. For example, smoking is a very common habit among the Bedouin, and now they cannot smoke in public — can you imagine? They have to hide and smoke in their houses. Their everyday life has completely changed and it’s being constrained by extremists.”

He added that IS’s success in rallying droves of foreign jihadists to its cause had also worked against the group in its interaction with tribes. “They see IS as foreign occupiers in their country. … Many of the tribes speak using bad words against the Chechen fighters, even against the Tunisian [fighters], even though they are Arabs. They are considered as people who come from all over the world to take their lands and to change their lifestyle.”

At stake in the current clashes is control over the nearby oil fields that make Deir al-Zor one of the Syrian provinces richest in natural resources. For IS they represent a valuable asset in their war machine, while for the Shaitat they are native lands whose wealth has too long eluded them under successive occupiers and regimes. President Bashar al-Assad hoped to put that resentment behind him on Friday, when his air force dropped leaflets on eastern towns in Deir al-Zor praising the tribes’ “glamorous” history and their fight against “the guerrilla of IS, which steals the property and wealth of our people.”

The tribes' prospects may well depend on their unity, something that the other rebels fighting against Assad’s forces and IS have found notoriously difficult. Divisions are already apparent, with the Shwet clan releasing a video message reaffirming their support for IS and condemning the Shaitat uprising. The Shaitat’s response rebuked tribal truces with IS, just as activists reported new ones being made in Shannan, another town in eastern Deir al-Zor. On Sunday, one of the tribe’s elders issued a statement appealing for all of Syria’s tribes to help them, and to rise up against IS, a call that, if heeded, could mobilize up to 3.3 million people. But the Shaitat’s costly campaign has shown the risks of rebellion, and if the appeal is ignored, the clans will likely become further divided, and the Islamic State will grow stronger than ever.