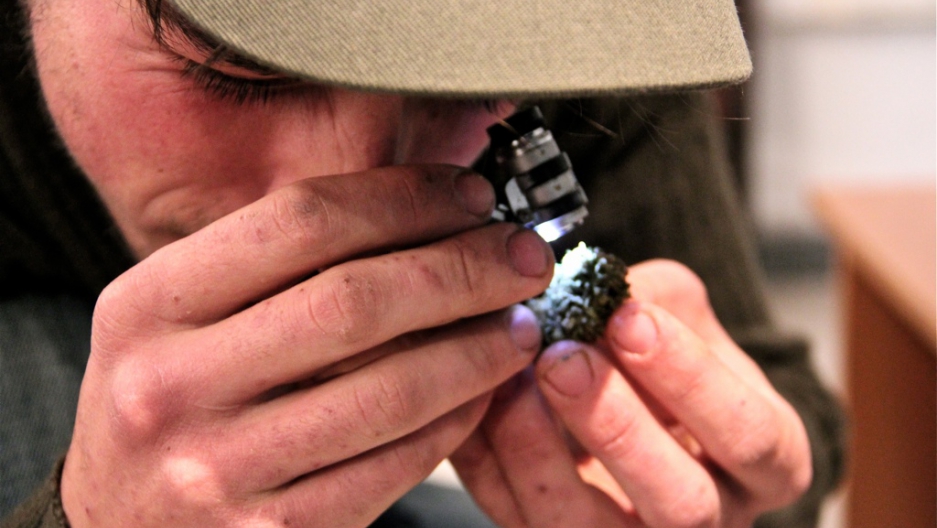 A consumer at the Cannabis Studies Association checks a bud for crystal-looking bits said to contain the THC chemical that gets you high.
Credit: Kamilia Lahrichi
Share

MONTEVIDEO, Uruguay — Uruguay has become the Great Green Hope for legal marijuana proponents across the globe.

Pot is now all-but-completely legal in this little South American country, and the government has started rolling out the rules and bureaucracy for its extraordinary experiment.

But, as pot proponents in the United States and elsewhere look on closely, there’s still a lot of confusion about how it’s going to work.

Two big falsehoods in particular have been propounded by Uruguayan officials and repeated by the media.

A closer look reveals some uncomfortable truths about the direction Uruguay’s weed revolution may be headed.

Get this straight: Uruguay’s government has not explained how it would sell pot in pharmacies at $1 a gram. Yet this canard has been spread across news stories from Australia to Canada.

It originates from an October story by The Associated Press, which attributes the $1-a-gram claim to Uruguay’s drug czar Julio Calzada. Since then, it has spiraled and morphed into an oft-repeated pledge by the ruling Broad Front party.

Nobody who GlobalPost spoke to in the cannabis industry thinks it’s feasible to price one gram of pot at $1.

In common US terms, that would be like selling an eighth of an ounce for about $3.50. By contrast, the cheapest cannabis listed online by The Clinic dispensary chain in Denver, Colorado, was going for $59.45 for an eighth on Thursday.

“That’s basically impossible, in my mind. I can’t see that happening,” said Tjalling Erkelens, the owner of Bedrocan BV, which grows legal marijuana in the Netherlands.

Erkelens said an individual might be able to grow and sell weed for $1 a gram in their yard, if they just tossed out some seeds, chopped down the plants, dried them and sold them on their front porch.

But any conditions placed on the quality of the pot, and any requirement to package it or transport it would increase costs significantly, Erkelens said.

Uruguay has conditions galore, according to the government’s recently released call for growers of cannabis.

Uruguay has grand plans to track every legal marijuana plant in the country using radio frequency tags — something that hasn’t ever been done in any other legal marijuana market. And there’s a host of other sophisticated conditions: Growers must cultivate cannabis inside, requiring greenhouses to be built (growing outside would be impossible year-round in Uruguay’s wet, often cold environment); and they have to provide their own security and packaging, dispose of waste in stipulated ways and provide extensive records on quality control.

Start piling on luxuries like those, and that bargain barrel price looks like a pipe dream, said Neil Closner, CEO of Ontario-based MedReleaf Corporation.

“There’s no way that’s feasible. No way,” he said.

Then there’s the question of distributing the weed.

Erkelens said the cost of transporting pot alone accounts for half the wholesale price of the marijuana his company sells. He was coy about the exact wholesale price.

In an excellent research paper last year, two analysts concluded that even with massive wholesale production of cannabis, and significant economies of scale, costs would never dip below $1 a gram (a hat-tip to this blog post for the link.)

All this brings up the questions: How on Earth does Uruguay hope to attract companies or individual growers to produce weed if they can only sell it for $1 a gram? Why would companies be interested in taking on what surely seems to be a loss-making enterprise?

Emails and phone calls to government officials to try to answer this question went unanswered.

There is, of course, one way for the Uruguayan government to meet its bargain offer: by heavily subsidizing the growing and distribution of pot.

And that brings us to our next point.

2. Pot in Uruguay will be tax-free

This is another falsity that’s been repeated again and again in the media.

Uruguay’s ruling Broad Front party, gearing up for an election in October, desperately needs to win over skeptics of the new marijuana law. That includes people who favor legalization but don’t like the idea of the government controlling — and taxing — their smoking habits.

First off, consider what we discussed above: If it’s impossible to produce and transport high-quality pot and still make a profit at the state-set price, there has got to be some sort of subsidy involved somewhere. And a subsidy that takes money from one part of the budget and plugs it into another could be considered a form of taxation.

But there is also a blatant tax on weed.

As this post by research group InSight Crime rightly points out, government officials have said they will charge both a fixed and a “variable fee” on cannabis growers. This fee will be used to help pay for the bureaucracy Uruguay is building to regulate its pot market.

That fee is a tax.

The government doesn’t call it that because doing so would be unpopular, but it’s a tax. And it would eventually be passed on to consumers.

Which brings us to a strange conclusion.

One of two things must be happening here:

a) Weed isn’t really going to sell at $1 a gram, but will sell at market price, including the cost of the fees (taxes) to the growers; or

b) It will sell at $1 a gram, but only because the government is significantly subsidizing it.

Both of these scenarios are really big deals.

Scenario A is a big deal because the visionaries who created this law did so specifically to combat narco-traffickers and to try to kill the illegal pot trade. They have said repeatedly that to do this, they must sell weed that’s cheaper and better quality than what can be bought on the street.

But as GlobalPost reported recently, good quality illegal pot is dropping in price already, and by demanding all the conditions they are from growers, there seems to be no guarantee the government can sell weed for less than it can be bought for on the street.

Scenario B is a big deal because this pot law is already deeply unpopular in Uruguay.

The Broad Front, which six months ago was expected to sail to victory in October’s elections, is now facing a tough fight from a rival candidate. That opponent has said he will dismantle the pot law as one of his first orders of business.

As the election battle heats up, think what happens if it emerges that Uruguay really will be taking money from its health, education or other budgets to subsidize the nation’s pot habit.

That would make for an interesting campaign season.

GlobalPost PlanetPic: These Uruguayans are itching to grow the country's first legal pot