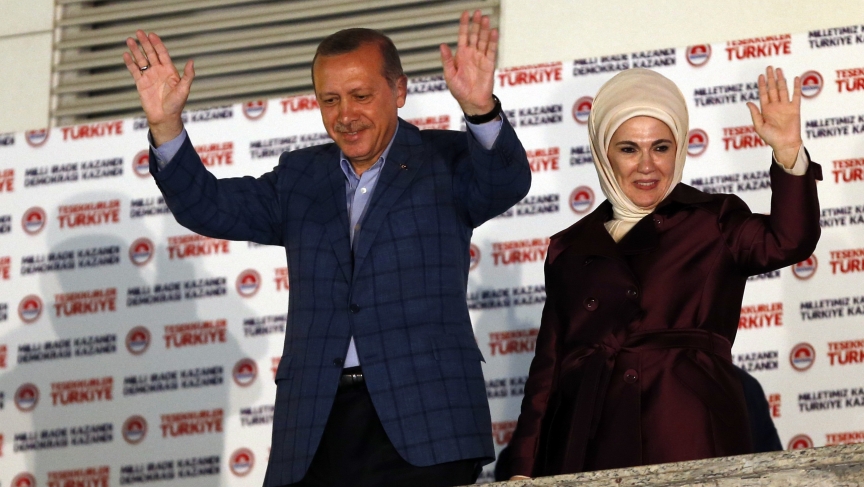 Recep Tayyip Erdogan, Turkey's prime minister, and his wife, Ermine, wave to supporters as they celebrate his election victory in front of the Justice and Development party headquarters in Ankara on August 10, 2014.
Credit:

The man who was Turkey's prime minister is now its newly-elected president.

Recep Tayyip Erdoğan won 52 percent of the vote in Sunday's election, the first in which Turks elected their president directly. Until this year, the president was chosen by a vote of the parliament.

Dalia Mortada, a reporter who is in Turkey, says that's not the only reason this is an important election. The Turkish presidency is largely ceremonial, but with the powerful Erdoğan taking over the office, she says that's likely to change. “What’s going to happen is that the prime minister is taking a back seat and the president is going to be the most powerful position in Turkey," she says.

But the idea of electing a president for the first time didn’t persuade many people to turn out and vote. “Turkey has compulsory voting, meaning that people have to vote. It’s required by law,” Mortada says. Despite that, only 70 percent of the population showed up at the polling stations, a low percentage compared to previous local elections.

There are a couple of reasons for that, Mortada says. For one, Erdoğan faces widespread opposition. Over the past year, Turks have protested against what they see as increasingly authoritarian and Islamist streaks in Erdoğan's administration. The president-elect comes from the Justice and Development Party, an Islamic party, though he'll have to give up membership when he takes office.

There has also been a huge corruption investigation that implicated many high-ranking members of Erdoğan's government in bribery and other crimes. In response, Erdoğan has attempted to crack down on social media for publishing leaks.

There may also be a more prosaic reason for the low turnout: poor timing. "In Turkey the upper middle class and the upper class tends to go on holiday during the summer," Mortada says. "Either they have a summer home by the beach or go on holiday."

Meanwhile, Erdoğan begins his term as president at a difficult time in the region. The militant group ISIS roams in Iraq and tensions between Gaza and Israel remain high despite the current cease-fire.

Mortada believes that one of the reasons Erdogan was elected was due to his opposition to Israel's policies towards the Palestinians. "He has not hidden his position in any shape," she says referring to Erdoğan's support for Gaza.

Mortada says Erdoğan has also been very supportive of Sunni groups like the Muslim Brotherhood and rebels in Syria. In all, she says, while Erdoğan has been very clear about his foreign policies, we'll have to wait and see how they play out once he actually takes office.