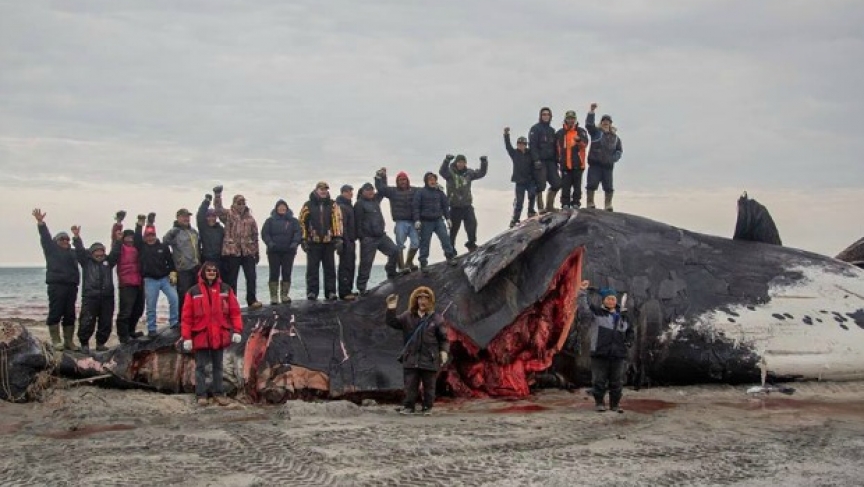 The hunting party celebrates its successful catch of a Bowhead whale
Credit:

Hunters in the Nunavut Territory of Northern Canada are celebrating after catching their first bowhead whale in a century.

The successful hunt occurred in the waters near Clyde River, an Inuit town located on the shore of Baffin Island's Patricia Bay. The hunt marked the return of an ancient practice to this community of 900 residents.

“Our ancestors were whalers, and its always something we’ve wanted to do — to bring back our culture," says Jerry Natanine, the mayor of Clyde River. "It’s a good food source and there are plenty of bowhead whales around this area.”

The bowhead whale was a means of subsistence and a symbol of the Inuit culture for centuries. But commercial whaling nearly destroyed the bowhead population in northern Canada. By the beginning of the 20th century, the bowhead was on the verge of extinction.

In 1972, the federal government of Canada outlawed commercial whaling, but since 1991 the Inuit have been allowed to hunt under a strict quota. Now a limited whale hunt has become an annual event in Nunavut.

Asked what he thought of protests by animal rights groups who object to the killing of a majestic animal still considered a threatened a species, Natanine says, with a light laugh, "I don't know how to answer that. We're hunters."

Natanine did point out that two of the hunting party were women. "One of them harpooned it and they both made strikes. It was awesome," he says with obvious pride.

Though the recent catch in Clyde River was a success, the hunt did have one moment of unexpected danger: a group of hunters was nearly thrown from their boat by a swipe of the giant animal's tail. “They were in midair, but luckily they all landed back in the canoe,” one of the hunters told CBC news.

The captured whale turned out to be pregnant, but Natanine says this is not a concern.

“It’s our first time whaling, and from watching how the whale acted and how it looked, in the future we’ll be able to tell,” he says. “These are things you’ve got to learn out in the field.”

The whale meat and muktuk is widely shared within the community and with relatives and friends throughout the Northern territories. Natanine has eaten whale before and his first taste of this one was just as he remembered it: “Absolutely delicious.”