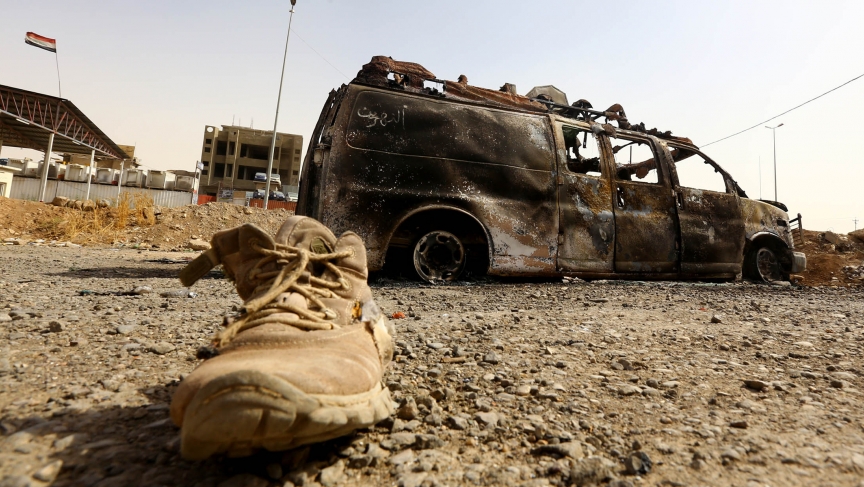 A burnt vehicle belonging to Iraqi security forces is pictured at a checkpoint in east Mosul on June 11, 2014, one day after radical Sunni Muslim insurgents seized control of the city.
Credit:

On Monday, news broke about the arrest of 40 people in Kosovo suspected of fighting in Iraq and Syria as members of ISIS, the radical Islamist militia. So if ISIS fighters are now commuting between Kosovo and Iraq, is it possible that others might target the United States?

We don't really know. According to Matt Levitt, a counterterrorism expert at the Washington Institute for Near East Policy, an answer probably doesn't exist outside the intelligence community — or maybe even within it. "But we do know that they are even more extreme than al-Qaeda," he says.

About 100 Americans have either gone or tried to go to Syria to fight with ISIS or other radical groups, sparking fears that sleeper cells could threaten the US. "There's a concern these people could come back further radicalized," says Levitt, who directs WINEP's Stein Program on Counterterrorism and Intelligence.

The concern is even more pronounced in Europe. Muslims from many EU countries have been attracted to the fight in Syria, and their passports allow them to roam Europe with few problems unless they're detected by intelligence agencies. "I've had the opportunity to sit with the leaders of several European intelligence agencies and this is their number one, number two, number three priority," Levitt says.

Levitt says he's not losing sleep over the ISIS threat, but there's no doubt it's still a high priority — and one that is likely to move beyond the borders of the current fighting in the Middle East.

"In the terms of the things I worry about from a counter-terrorism perspective, ISIS is at the top of the list," he says. "Las Vegas rules do not apply in Iraq and Syria. What happens there will not stay there."