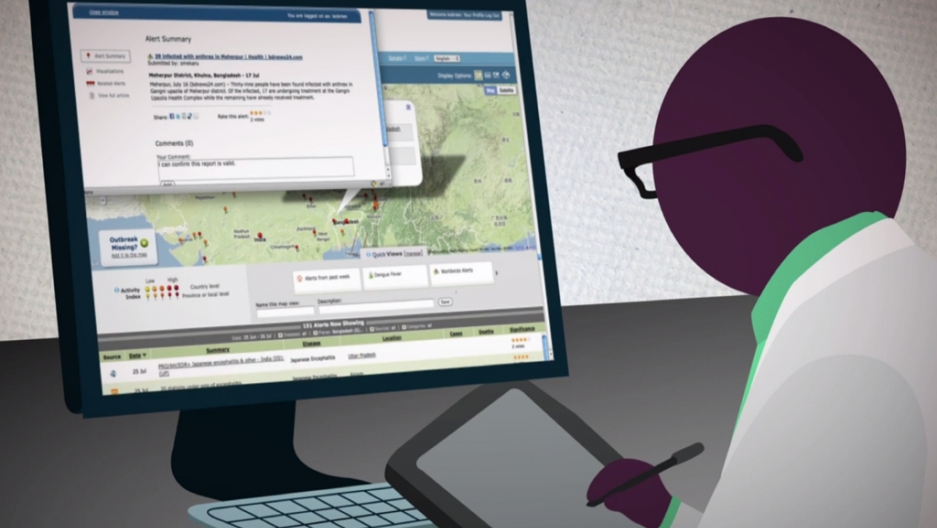 BOSTON, Mass. — On March 23 the World Health Organization announced there was an Ebola outbreak in Guinea. But a team of researchers four thousand miles away in Boston already knew that.

The internet, of course! And a little help from their incredibly sophisticated website and online disease-tracking tool, "HealthMap."

HealthMap, which launched in 2006, is the brainchild of a few dozen scientists, epidemiologists, and software programmers at the Boston Children's Hospital. They wanted to design a tool that could take bits of information scattered across the internet and shape it into knowledge about infectious diseases around the world. So they wrote software that pulls, sifts, and organizes all kinds of information from thousands of sources, including government websites, NGOs, local news agencies, Twitter and Facebook and turns it all into a neat, easy-to-use disease-tracking database.

Social media have been goldmines of information, but they've always been hard goldmines to mine. Twitter, Facebook, and other similar social networks produce a lot of useless noise, but HealthMap's algorithm has proven itself very good at sorting useful and useless information.

In fact, it was Twitter that gave the HealthMap team its first clues about the current Ebola outbreak.

It turns out that some health care workers in Guinea kept blogs, and when they started seeing patients turn up with Ebola-like symptoms, they blogged about it. Some Twitter users noticed and mentioned the blogs in tweets.

HealthMap picked up on the chatter.

On March 14, HealthMap figured out that eight people in Guinea had died from a "mystery hemorrhagic fever." On March 19, it picked up the following report from local media: "An outbreak of hemorrhagic fever has killed at least 23 people in Guinea's southeastern forest region since February when the first case was reported, health authorities in the West African nation said on Wednesday." That same day, the HealthMap team in Boston published an alert. The World Health Organization published their own press release on March 23, after getting official word from the Ministry of Health of Guinea.

Did HealthMap get there first? Yes and no. The outbreak was almost certainly on the WHO's radar, perhaps even BECAUSE of the information HealthMap had made available. Either way, it's an impressive demonstration of the potential for digital technologies to revolutionize global public health.

You should check out the HealthMap website yourself. It started as a tool for folks in the public health field, but it's been designed for easy use by just about everyone.

Interested in tracking a particular disease around the world? Easy. Traveling somewhere new and you want to be extra super prepared, you know, JUST IN CASE, you can figure out what disease you might encounter there. The whole point, according to the HealthMap team is to be "prepared, educated, alert, and proactive" when it comes to infectious diseases.

You can see an informational video about HealthMap here:

HealthMap from healthmap on Vimeo.