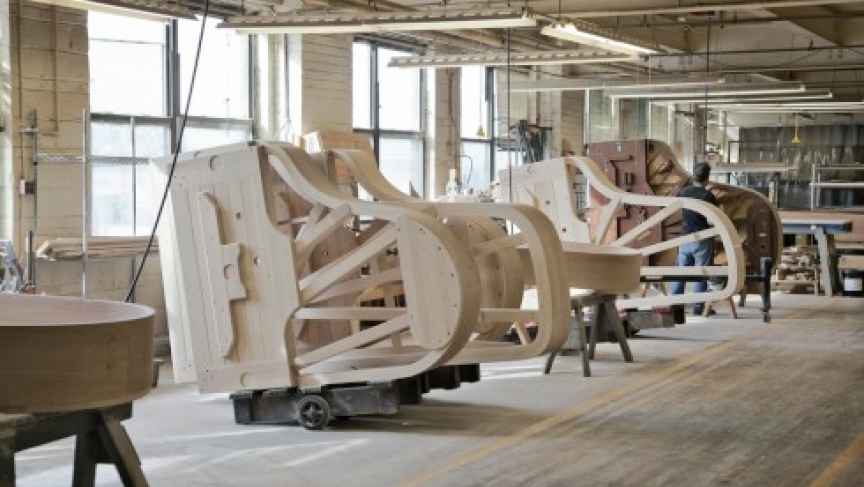 Pianos rest in the Case Department of the Steinway piano factory in Astoria, Queens, awaiting finishing. Once each is complete, it will have its own, specific sound.
Credit:

Out near LaGuardia Airport, in Queens, is the Steinway piano factory. It smells like sawdust and lacquer. Some 1,500 pianos leave this factory every year. And Wally Boot plays every single one.

“I've been here for 52 years,” he says. “And I love every minute of it. I'm tone inspector. I'm the last one to test the piano before it leaves the factory.”

Boot "voices" the piano. It's not tuning. It's finding the piano's sound.

Boot adjusts bright and mellow by making small changes to the felt hammers inside the piano, which hit the strings. Sometimes, a hammer is too soft. So he applies a lacquer solution to make it harder.

“And if it's too hard, I got a tool over here with needles in it, and I poke little holes in the top of the hammer, and that's going to break up the density of the felt, and make a softer sound,” says Boot. “The thing is, I've been working on pianos so much, I look at a piano and can tell if something is wrong, out of place. You know, because you see the piano every day, you know that something's out of place, you can tell right away.”

What Boot hears in a piano comes from 52 years of experience. He’s learned the ins and outs of piano acoustics through practice and intuition.

Acoustic scientists at NYU have recently started to quantify that information by mapping the sound that radiates from a piano. Picture a seven-foot grand piano in a studio. The lid’s missing, so you can see all the strings. Researchers suspend a rod embedded with 32 microphones over the piano’s body.

“We played this middle C at a very soft level, a medium level, and a very loud level,” says Agnieszka Roginska, a professor in NYU's music technology program. She says using a pianist to play middle C over and over wouldn’t be scientific. So they’re using a disklavier, a fancy player piano triggered by electronics. “So we could hit the same note, with the same velocity, thousands of times,” she says.

To get a better idea of what they’re measuring, it helps to understand the guts of a piano. When you hit a key, it throws a hammer at the strings. That makes the strings vibrate. But you’re not usually hearing that sound directly. What you’re hearing, is the sound of that vibration transferred to the piano’s wooden soundboard. The soundboard acts like a loudspeaker, amplifying the string’s vibration.

“The soundboard is approximately the size of the whole piano that you're looking at,” says Alex Case, an associate professor of music at the University of Massachusetts, Lowell, and a collaborator of Roginska’s. “And it's that piece of wood flexing and bending and moving that pushes the air around, that creates the sound wave we actually hear.”

Case says they're not just measuring the piano's loudness. They're also mapping which frequencies resonate where.

“In any given location on that piece of wood, it may be moving more at some frequencies than others. So as you work your way around the piano, you have sort of hot spots and cold spots at different frequencies,” he says. “If you pluck or strike a string, it has a pitch you could sing along to. But that pitch is likely the lowest frequency in a complex sound. So that string vibrates with a fundamental frequency that we identify. But then it has a recipe of harmonics, a recipe of overtones, that further refine its timbre.”

You can isolate those harmonic ingredients by running your finger along a piano string as it's struck.

And now they have that map of the piano's harmonics — for middle C at least.

So why record a piano this way, so thoroughly, with such detail? Case says this research could benefit recording studios. Audio engineers might have a better sense of where to place microphones if they know which frequencies favor certain parts of the soundboard. And, Case says the map they’re creating might give piano makers a few insights into refining how pianos are made.

“The history of piano-making is this wonderful Darwinian process already,” says Case. “And I wouldn't presume that we could better inform what they figured out since they started experimenting in the 1700s. But it would be our hope that by having very high-resolution measurements all around the instrument, that it might lend insight to the instrument maker where they could see there's certain areas of the soundboard that matter more than they thought. Maybe there's more sound projecting from a corner of the soundboard that they assumed wasn't that important to the tone. So they might look into that area and figure out if it should be shaved thinner, or have extra bracing, or something like that. So I'm hoping the data gives them some insight of other places to go next as they forever refine the tone of the instrument.”

Bob Berger, the director of customer satisfaction at Steinway, says he's interested in this sort of sound-mapping information, because it gives you an idea of how the soundboard’s behaving. But he has a different interpretation of the piano's “evolutionary history.”

“It's Darwinian to an extent. But to think that there has not been some selective breeding in proving the piano through the decades I think would be ignoring the interests and work and contributions of many people,” Berger says. “And you know the idea of having sophisticated equipment to measure acoustic performance is wonderful to have, but never discount the ability of your hearing to be able to discern very subtle changes in many different aspects of tone and sound.”

Bill Youse says intuition really does play a big role in determining whether a Steinway soundboard lives up to the name. Youse has been at Steinway 41 years, and he’s worked nearly every job in the factory. He’s a third-generation Steinway employee. “My son also works here, so it's four generations of my family been working at Steinway,” he says.

Youse walks through Steinway’s Belly Department, where soundboards are installed in the piano case. He shows how they test the quality of a soundboard.

“This is a piano that's been bellied,” he demonstrates. “It has no strings on it yet. And it's just sitting here waiting to be strung. So the first thing we'll do is go out" — he beats the piano's soundboard a few times with his fist — "and you can feel that thumping. You can hear the floor shaking, hear the equipment under it rattling, you feel it bouncing off your chest. So we know. We'll go to another piano, and say, 'OK, let's try this again.'"

Youse beats the soundboard again. "You can even also hear a little bit of resonance in there, so we know that board's been done properly. And we know that when we put strings on this, this is going to be a nice piano. But at this point, we don't want to go any further if we notice anything that's not right.”

Generations of craftsmen like Youse and Boot — they know pianos by sound, and feel. Roginska and Case say scientists are just beginning to understand that complexity.