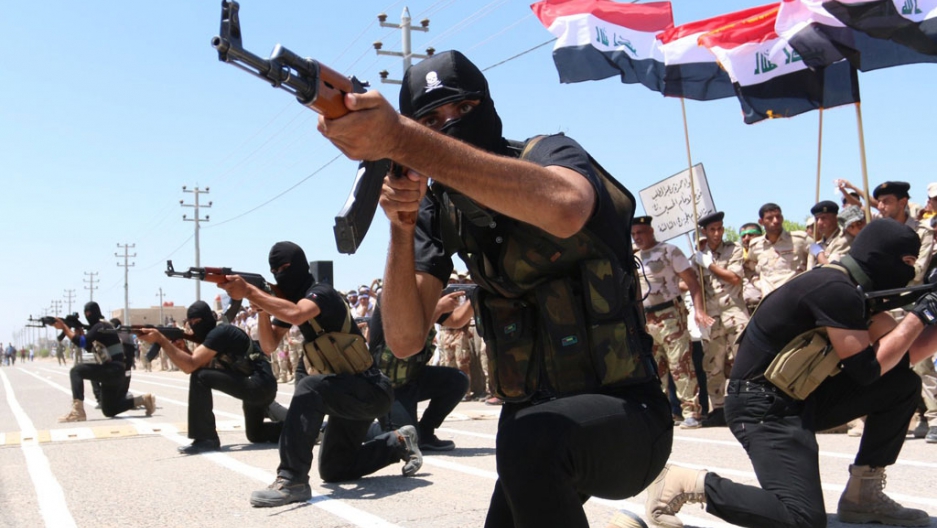 Iraqi Shia volunteers who have joined government forces to fight Sunni jihadists from the Islamic State take part in a training session near the southern port city of Basra on Aug. 7, 2014.
Credit: HAIDAR MOHAMMED ALI
Share

This live blog is now closed. We will pick up coverage tomorrow.

US strikes Islamic State targets in Iraq with drones and jets

Agence France-Presse — US forces launched a second wave of air strikes against Islamic extremists near Arbil in northern Iraq on Friday, destroying a militant convoy and two mortar teams, the Pentagon said.

Shortly after 1400 GMT, US drones destroyed a mortar position and killed a group of militants. Just over an hour later four F/A-18 jets hit a seven-vehicle Islamic State convoy with eight laser-guided bombs.

The Islamic State has pushed north into Kurdistan and is threatening to exterminate an entire religious-ethnic group, the Yezidis, whom some Sunni Muslims consider "devil worshippers."

Thousands of Yazidis have fled to the mountains, where they are dying from dehydration and exposure. Along with airstrikes, the US is dropping food and water.

So who's running this show? That would be Abu Bakr al-Baghdadi. In a business dominated by charismatic, propaganda-loving, AK-47-toting figureheads like Osama bin Laden and Abu Musab al-Zarqawi, Abu Bakr al-Baghdadi is an unusual leader — a recluse who has maintained operational control of the Islamic State despite some of his deputies having never met him in person.

So who is Abu Bakr al-Baghdadi? Here's everything we know so far. There are disturbing reports coming in of Yazidi women being kidnapped by Islamic State militants:

On Sunday, one man sat in the courtyard of a temple in Lalish, his face expressing anguish. He was unable to speak. The man next to him explained:

"They captured his whole family," he said. "They made his wife and daughters cover their hair and faces. Then they made them renounce their religion and swear allegiance to Mohammed. After that, they killed them all."

The man had been away from his home at the time of the attack. When he tried to return, he was informed of the executions by his companion who dragged him from the scene as thousands fled to the homes of relatives or to the temple, which is now sheltering thousands.

The United Nations says 200,000 civilians, most of them Yazidis, have fled Sinjar and warned of a burgeoning "humanitarian tragedy." While the majority of Sinjar’s population is Yazidi, there are also some Arabs and Assyrian families.

And here's some background on Yazidis from Foreign Policy:

"Attendants of an 11th-century religion that combines elements of Zoroastrianism, Islam, and Christianity, the Kurdish-speaking Yazidis have been targeted by the Islamic State for extermination."

The Yazidis claim to have survived 72 attempts at eradication. Now, they face one more. http://t.co/68m1rNljRl pic.twitter.com/2K1cS6ng7z

No specific end date for US military strikes in Iraq, White House says

White House spokesman Josh Earnest said initial US support will be on military strikes to protect American personnel working in Iraq, and to address the urgent humanitarian situation on Sinjar mountain.

"The Nineveh plains of northern Iraq are home to a diverse mix of minority ethnic and religious groups," writes GlobalPost's Tracey Shelton. "Their roots, their heritage, their homes and their most holy shrines are all right here in this brutal but beautiful land known as the cradle of civilization. But this week, three of these minorities, already persecuted for centuries, have come under the most severe threat to their existence in decades."

Shelton has been on the ground documenting the plight of families.

A security officer fires warning shots as desperate families attempt to drive around the congested checkpoint. While Shabaks follow a form of Islam, they have been heavily persecuted for centuries and were targeted along with the Kurds during Saddam Hussein’s ethnic cleansing campaigns of the late '80s. Photo by Tracey Shelton/ GlobalPost

Where the airstrikes are taking place

Bram Janssen, a videographer for The Associated Press, has been live-tweeting airstrikes in Iraq. Follow his tweets @BramJanssen

Strikes are too close to peshmerga frontline. Lots of shooting in background now. #isis

We counted six air strikes. We were standing at the Khazer checkpoint which thousands of refugees from #Mosul fled yesterday. #IS

Another minority group displaced by the fighting

Islamic State's offensive in Iraq has displaced thousands of people, including those from the minority Kurdish-Shabak community in the northern part of the country. The photos below by AFP/Getty photographer Marwan Ibrahim show Shabaks receiving water from the Iraqi military.

UK to drop aid over Iraq, but will not join airstrikes

The British air force will drop food aid to Iraqi refugees fleeing extremists in "the next couple of days," the defense secretary said Friday, although London has ruled out taking military action with the United States.

The announcement came after the Foreign Office urged Britons in the Arbil, Sulaimaniyah and Dohuk provinces of Iraq's autonomous Kurdistan region to "leave now" as fighting spreads north.

Prime Minister David Cameron said he was "extremely concerned by the appalling situation in Iraq and the desperate situation facing hundreds of thousands of Iraqis."

"And I utterly condemn the barbaric attacks being waged by ISIL (now Islamic State) terrorists across the region," he said in a statement.

The Federal Aviation Administration has halted US airlines from flying over Iraqi airspace.

For more background on the Islamic State

Watch Vice's documentary The Spread of the Caliphate: The Islamic State, which takes an in-depth look at the group overtaking Iraq:

Crucial background on the Islamic State

Frontline has an excellent Q&A with Charles Lister, a visiting fellow at Brookings Doha Center, on the ascent of the Islamic State militant group in Iraq.

Asked whether the group will attack the West, Lister said, "I think in the immediate future, the only thing the Islamic State will be focused on is maintaining its military momentum, acquiring control of more territory, and most importantly of all, consolidating control and introducing Sharia governance in those areas. I would expect that in its perspective, targeting the west would certainly be a future option."

Read the rest on Frontline.

What it's like to be displaced by the Islamic State

"There will be huge changes on the ground in the coming hours," Lieutenant General Babaker Zebari told AFP, moments after the Pentagon confirmed its first air raids against the Islamic State.

So the US is back in Iraq

US military aircraft conduct strike on ISIL artillery. Artillery was used against Kurdish forces defending Erbil, near US personnel.

"Earlier this week, one Iraqi in the area cried to the world, 'There is no one coming to help'," US President Barack Obama said in a speech last night as quoted by Reuters. "Well, today America is coming to help."

"We can act carefully and responsibly to prevent a potential act of genocide," he added.

Many minority Iraqis are suffering without food, water and other basic needs as Islamic State militants seize town after town.

So, how did we get here?

GlobalPost put together a comprehensive 54-step guide on how the choas in Iraq began.

Check it out here.