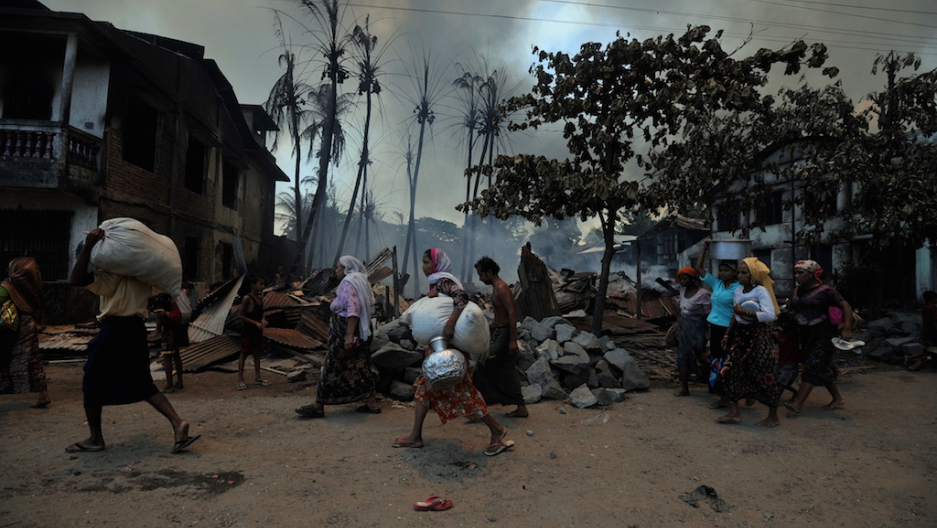 Muslim residents carry their belongings as they evacuate their houses amid ongoing violence in Sittwe, capital of Myanmar's western state of Rakhine, on June 12, 2012. In the newly liberalized country, vicious rumors are spreading via social media.
Credit: STR
Share

YANGON, Myanmar — In a seaside town called Sittwe a rumor started in March that a foreign NGO worker had removed a Buddhist flag from outside the offices of her employer.

In July, there was a claim that a girl had been raped.

The pattern repeats in towns and villages across Myanmar. Rumors rip through communities, fueled by seething racism and embellishments. Graphic images of violence are shared virally through social media platforms like Facebook, which has become one of the most popular websites in the country since its opening up.

Connectivity here is in its infancy. For decades, Myanmar had been closed off from the world, its people kept under tight control by thuggish generals.

Over the past few years democracy has blossomed here, a transition that has been wildly celebrated by the West. US President Barack Obama has called the shift from military authoritarianism to democracy in the Southeast Asian nation one of diplomacy’s greatest achievements.

And yet along with these freedoms, derogatory language, misinformation and hate speech — particularly against religious minorities — have proliferated to such an extent that the United Nations has taken notice.

During a July trip to Myanmar, Yanghee Lee, Myanmar’s new special rapporteur on the situation of human rights, raised concerns about the prevalence of inaccurate rumors and “false information” pertaining to volatile Rakhine State, where Sittwe is situated, and which has been rocked by sectarian violence between Muslims and Buddhists since October 2012.

“I am concerned by the spread of hate speech and incitement to violence and hostility in the media and on the internet, which have fueled and triggered further violence,” Lee said at the conclusion of her first fact-finding mission to Myanmar last week.

She called for measures to tackle Myanmar’s growing hate speech problem, including legislation that targets the language, while not excessively limiting freedom of expression.

Hate speech is generally defined as speech that denigrates people based on their membership of a particular group. In Myanmar that group is Muslims.

The ensuing melee took the life of an 11-year-old girl. Dozens more died in the aftermath from lack of medical care that would have been provided by the aid groups that had left.

As for the rape allegations in Mandalay, two died and at least 14 were injured. Later, the girl admitted she had been paid to make the false claim.

Myanmar has been virtually catapulted into the information age. After a 1988 crackdown, the military took a tight hold on the flow on communications. By 2010, there were only an estimated 110,000 internet users, with land line penetration estimated at one percent and cell phone penetration at four percent.

Now, there are at least one million Facebook accounts in Myanmar. And so powerful is the pull of Facebook that when new telecoms operator Ooredoo soft-launched services last week, it offered free Facebook access to all subscribers. Messaging app Viber says its users have nearly tripled, from two million in February this year to five million in July.

Under military rule, Myanmar was a country full of whispers. Citizens became deft at quickly gathering information and sharing it surreptitiously with interest groups taking it as gospel. This created what sociologists call an “echo chamber” — in which like-minded people share information, reinforcing stubbornly extreme views.

For instance, when unrest broke out in the Central African Republic earlier this year, Facebook in Myanmar was alive with graphic postings of the violence, misidentifying the perpetrators as Muslim. (They were the victims in this particular round of violence.) That led to anti-Muslim hate speech, justifying the echo chamber’s views.

“While increased connectivity brings immense advantages, it also brings problems,” said Aela Callan, a Knight Fellow studying hate speech in Myanmar. “[In the digital age] hate speech and misinformation is able to spread in ways that it couldn't before, and at a much faster speed.”

“Myanmar people have not been exposed to free speech and there is little nascent familiarity with the responsibility that brings,” Callan told GlobalPost by email. “In this current era they are more exposed to hate, but they can also be exposed to peaceful and constructive speech.”

One group trying to bring peaceful speech to social media is Panzagar, headed by blogger and former political prisoner Nay Phone Latt. In April, Panzagar and other activists took to the streets of Yangon in a first of its kind anti-hate speech drive. Placards bore slogans telling Myanmar nationals to “watch what we say so that hate between mankind does not proliferate.”

Both activists and officials have spoken out against the tide of hate speech spilling through discussion boards on Facebook. In July Chiang Mai based media outlet The Democratic Voice of Burma (DVB) reported that the government was negotiating an agreement with Facebook to monitor hate speech.

“The first part of the agreement is to prevent instigation of riots and moderate posts in accordance to Facebook’s policies,” DVB quoted Zaw Htay, director of Myanmar’s president’s office, as saying. “We also discussed monitoring, but not in a way that would impose restrictions on Facebook users.”

However, Callan pointed out the inherent risks in legislating against types of speech.

“It's a slippery slope when it comes to enforcing such laws and the country does not have the capacity to do this well at this point in time. It may even backfire and end up being used against persecuted groups,” said Callan, whose work focuses on “dangerous speech” — meaning hate speech likely to incite mass violence. But the answer may not necessarily be criminalizing hate speech or introducing a cyber law to monitor Facebook usage or social media, she said.

“Most of the hate speech happening in Myanmar right now takes place by word of mouth or sermons or speeches. The violence in Meiktila is a good example of where news of a problem in Rakhine state quickly reached other parts of the country,” she said, referring to rioting that began in March 2013, some 420 miles away from the unrest in Rakhine.

The misinformation about the unrest in Rakhine was coupled with hate speech and used to justify devastating attacks in which buildings were burnt to the ground and people were openly killed in the streets.

“I strongly believe that community norms are the most powerful tool we have in the fight against hate speech in Myanmar. If people themselves say ‘Hey — that's not cool, that's not the way we do things,’ it is 10 times more powerful than laws and penalties,” she concluded.